The Case of the Philippine Drug War: When the State Securitizes an Existential Threat to Public Safety

Home /Drugs, Philippines, Politics/The Case of the Philippine Drug War: When the State Securitizes an Existential Threat to Public Safety 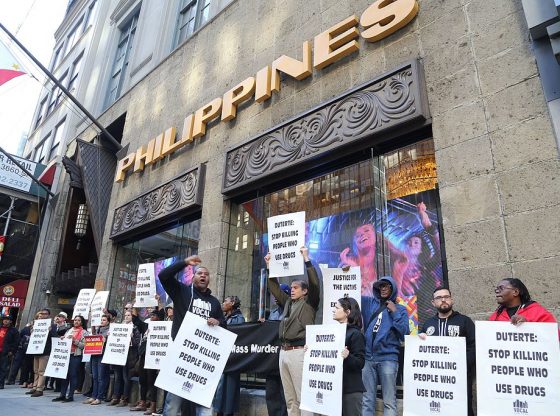 The safety of citizens and their communities, as well as their observance of law and order, is a social contract that underlines the very essence and existence of a state. In this sense, an existential threat to public safety and order is a security issue in the individual, societal, and state levels.

In a 2015 article, I argued that public safety in the domestic domain is a component policy of national security, alongside national defense in the strategic setting. My definition of public safety revolves around the protection of individuals—their lives, civil liberties, and properties— from all sorts of crime, violence, destruction, and disaster; and the promotion of peace, order, and security within the country.

Among non-traditional security concerns, illicit networks of illegal drugs trade and narco-politics, resulting in heinous crimes and corruption, threaten the survival of human collectivities and societal order. In the face of serious threat to citizens, communities, and public safety regimes, it behooves upon the state to fulfill its obligation to protect these security referents that have the legitimate claim to survive.

When a state securitizes the fight against illegal drugs, the logic of security changes the normal course of action by government. In theory, the security status given to rampant drug trafficking and related criminal activities necessarily removes the  problem from regular operations to extraordinary solutions.  This is especially the case when a state is also after  members of the police, government officials, judges, and politicians that were allegedly involved in the drug trade.

In view of the foregoing conceptual frame, within which securitization is explained, this article will discuss the facilitating conditions, enveloping complexities, and emerging challenges in what has been dubbed as the “Philippine Drug War.” First, the discussion will go over President Rodrigo R. Duterte’s battle cry to fight against illegal drugs, which he promised to do at all cost once elected to the presidency. Second, it will look into the war against illegal drugs as it happened in the country since he assumed office in July 2016. Finally, it will reflect on the way forward to win the war against drugs as the foremost security concern in Philippine public safety today.

Exasperated by the illegal drugs that were destroying the country, then presidential candidate Mayor Duterte campaigned to wage war against drug criminals from the highest echelon of government to the lowest elements on streets. In a country where the drugs trade was managed in national penitentiaries and used for political gain, no president had dared take up the drug problem as the priority agenda once elected to office. Thus, the extraordinary bravado and expletives of the local chief executive to apprehend high-profile syndicates and millions of drug addicts in the country earned him a landslide victory over traditional candidates in the May 2016 national elections.

With overwhelming public support, the newly elected President moved swiftly to securitise the drug problem as an urgent concern of government. In his consistent and compelling speech acts, Duterte swore to protect not only the innocent people from being victimised by illegal drugs, but also the state and society from being criminalised by local, national, and transnational drug cartels. As the securitising actor, he played on a rhetorical structure of a security discourse that suggests if we fail to address the drug epidemic, this will destroy the very fabric of Philippine society.

When the President frames the all-out campaign against illegal drugs as a survival interest and a priority over non-security issues, then it is only logical that the problem is removed from the normal course of law enforcement and public administration. In theory, a government at war with lawless elements grants itself the right to take on special powers, use force, mobilise state resources, and use whatever means necessary to thwart the threat. This theoretical explanation, which is academic rather than politically pragmatic, is patterned on the logic of security and framework for analysis of British Professor Barry Buzan and his associates.

That securitisation justifies emergency measures is a thought consistent with the real essence of security as explained in the literature of Security Studies. It must be taken into account, however, that the securitisation process must also pave way for de-securitisation of a public problem. De-securitisation means restoration to normalcy that would not have materialised had the state not taken decisive moves to securitize an existential threat to the public.

The War against Drugs

The Philippine security policy against illegal drugs was carried out by government forces in a two-pronged campaign plan known as “Double Barrel.” The lower barrel approach is   coined as operation plan (oplan) Tok-hang, which is a native Cebuano language for knock (tuktok) and persuade (hangyo). This is aimed to convince drug users and pushers to surrender without the use of force. The second upper barrel approach, known as Project HVT (high value targets), is directed against drug personalities and syndicates with networks in  problematic agencies of government.

The ensuing battles were bloody and the killings complicated. These were the realities criticised by human rights activists, political opponents, and international critics. The reported number of 2,710 deaths in anti-narcotics operations since July 2016 is alarming. More than this number, about 1,180,000 million drug users and pushers who surrendered also makes for phenomenal reading. Despite the mass surrenders and sharp decrease in drug operations, it was the offensives of state forces against criminals and suspects that caused media mileage. The death toll in police operations, extrajudicial killings, drug crimes, and other cases under investigation was taken as the highlight of the drug war. Without the security narrative, tales of murders and human rights abuses became the central concern in the all-out campaign against illegal drugs. On the other hand, the evils of illegal drugs and the decline of consequent atrocities against individuals, economy, and politics were put behind the more rowdy reportage of the horrors of a war.

Fighting a war against drug syndicates that are rooted in society as well as in corruptible government bureaucracy is beset with casualties, complexities, and complications.  As in any war, the strategic objective to gain victory over the enemy directs the ways and means to achieve this end. But unlike conventional wars which were settled between state actors in an anarchic international system, the fight against illegal drugs and criminal elements cannot be surrendered in a state controlled domain.

It is understood that the success of a war stands not just on the strength of the victor and the number of fallen enemies, but also on the support of the citizens that rally behind it. Public perceptions comprise the moral dimension of war. But whose opinions and positions matter most in an internal security policy of a state? Various voices proliferate in the media: the securitising actor in the person of the President; the police; the suspects and their kin; the families of drug victims; the political opposition; netizens; analysts; foreign governments; and international interest groups. Who will determine the correctness and appropriateness of the policy adopted by a state to securitize itself and the public safety?

Survey polls conducted by the Social Weather Station (SWS) in the first quarter of 2017 showed that public approval ratings of the drug war dropped to 66 percent from the previous 77 percent in December 2016. The police reacted by suggesting that survey questions were misleading and findings were partial. The polls came amid media reports of extrajudicial killings and police mishaps in drug operations, causing strains in the crackdown against drug criminals in the Philippines.

The Way Forward to Win the Drug War

There can be no let up in the fight against illegal drugs, especially in a country whose economic and politico-administrative vulnerabilities have long since put up with illicit networks of drugs trade. The war title given to the anti-drug campaign requires more than the   whole-of-government approach in which the state and its forces are the sole actors and the public are the external censors. Instead of being detached from the crusade against illegal drugs, citizens need to collaborate with government and help in community policing. The drawback, however, is the calibrated involvement of drug syndicates and rogue elements behind vigilante killings that muddle the drug war.

The war against illegal drugs, along with its characteristic extraordinary measures, is more than apprehending millions of drug users and criminals, and dismantling the drug trade. It is more of reconstructing a socio-economic and political system tied to illegal drugs. President Duterte’s campaign theme of “change” is a difficult challenge not only because of systemic constraints in a democratic republic, but also because of problematic conditions in a divided society.

The alternative discourse of focusing on creating an environment whereby people can live with dignity, peace, and prosperity is ideal. Nonetheless, this is insubstantial without the elements of authority and force in a public safety regime. Idealism cannot take the place of realism in security. It can only fuel the necessary policy and strategy to win the war against drugs so that the country can move forward to building up its domestic capacity as well as defence capability for national security and regional influence. Unscrupulous tactics need to be changed and castigated in the drug war, but anti-drug operations must be continued in order to achieve the strategic objective set by the security policy. It must be noted that the recently released National Security Policy (NSP) 2017-2022 in the Philippines places “public safety, law and order and justice” as the foremost national interest—an item that was not included in the key elements of the NSP 2011-2016. Towards this strategic focus, the Filipino people must work together and be united.