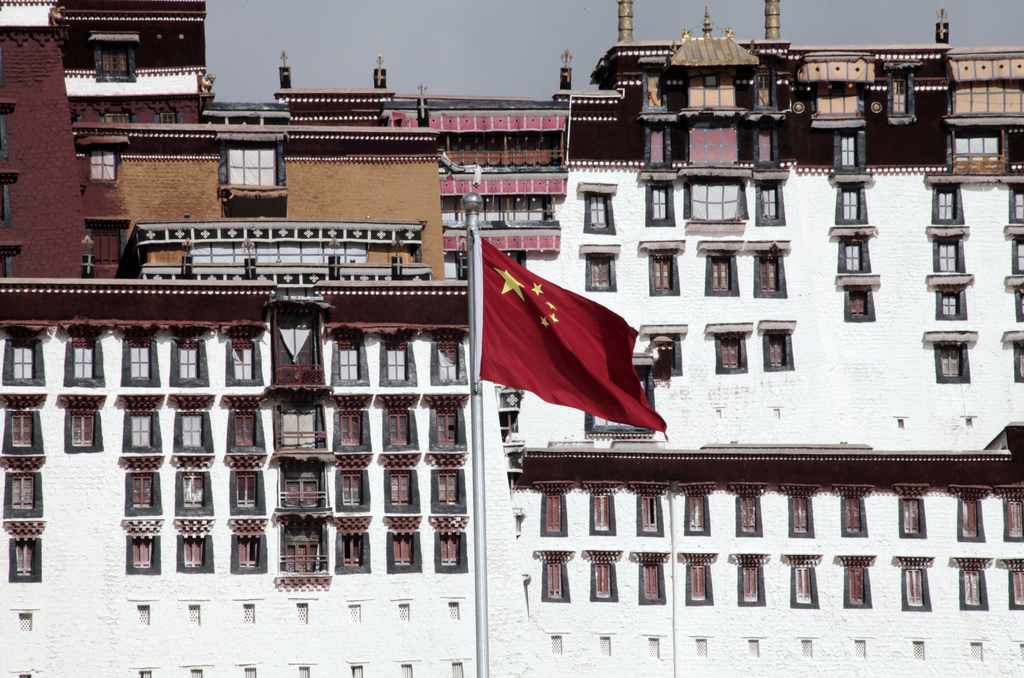 Over the last decade, the Tibetan Plateau has changed beyond recognition. In the place of the organic huddles of mud-brick villages and scattered nomadic pastoralist tents that characterised rural life on the Plateau for more than a thousand years, stand roadside lines of concrete and breezeblock housing estates. In the Tibetan Autonomous Region (which makes up much of the south of the Plateau), this is called the “Comfortable Housing Scheme”, designed to provide “moderately well-off” (xiaokang) housing for Tibet’s rural poor; in the northern Plateau, it is called the “Ecological Migration” scheme, meant to secure the great river sources that feed the Chinese mainland. Part of Beijing’s New Socialist Countryside strategy, it is designed to answer what the Party call the “problem of the rural” – a ‘problem’ that has emerged in the wake of the massive expansion of the core economies of China’s burgeoning urban centres. So far, these policies have seen the relocation of 2.3 million Tibetans, part of a massive strategic segmentation of the Plateau that places it at the heart of Beijing’s plans to control the centrifugal forces that beset the Middle Kingdom.

The Limits of Growth

Ever since its incorporation into Mao’s newborn Republic in 1950, the Tibetan Plateau has been an economic conundrum for Beijing. At nearly a million square miles, the Plateau is half the size of Europe, the source of nearly all of Asia’s major rivers, and commands a powerful strategic upland position at the heart of the continent. Ecologically, it is distinct enough to be referred to as “the Third Pole”, home of massive glacial ramparts, frozen climatic conditions, and occasionally, its own hole in the ozone layer.

The Chinese, however, call it xizang, “the Western Storehouse”, a fitting soubriquet for a high altitude region formed 50 million years ago when the Indian subcontinent crashed into Asia, raising the seabed 4000m and laying bear rich seams of copper, gold, boron, uranium and rare earth metals. This mineral potential has been locked away until relatively recently: the high Plateau’s mountain walls, geologically unstable valleys and permafrosted upper pastures render traditional railway transport untenable, and transport by road hugely expensive and hazardous. Until the early twenty-first century, anything less commercially valuable than gold or strategically less important than uranium was stored away.

Such obstacles have created a massive asymmetry in China’s industrial growth since Deng Xiaoping’s economic reforms in the 1980s: the eastern coastal cities’ access to cheap sea trade allowed them to bring in raw materials from South East Asia, South America and Sub-Saharan Africa; but China’s inland cities languished for lack of crucial extractive resources. Millions of young workers moved out of the inland provinces to find jobs on the coast, leaving ageing parents to work the land and bring up parentless grandchildren. Demographically and industrially, China was tilting towards the sea.

At the same time, deforestation, grassland erosion and desertification across the eastern slopes of the Plateau had seriously destabilised the Yellow and Yangtse Rivers, which fed most of China’s agriculture, industry and population centres. For the Yellow River, loess silt deposits released from the Tibetan uplands led to disastrous drought and flood cycles which, in combination with systemic industrial and pesticide pollution, now means that potable water in China’s northeastern provinces has dropped to a quarter of UN “absolute scarcity” levels, putting some of them on a par with the Arabian Desert for usable water.

For the Central Communist Party in Beijing, these problems were bearing fruit on their very doorstep, threatening the livelihoods and health of the national population to whom they had offered prosperity as the defining feature of the post-Tiananmen political environment, and in many respects their own legitimacy. The solution, proposed during Jiang Zemin’s tenure, was to seek to balance China’s economic growth across the length of the Middle Kingdom’s geographic corridor, rationalising the contribution of China’s western provinces (Gansu, Guizhou, Qinghai, Shaanxi, Sichuan and Yunnan) and autonomous regions (Guangxi, Inner Mongolia, Ningxia, Xinjiang and Tibet) – a combined region representing 70% of the PRC’s land area, but only 30% of its population and, at the time, only 20% of its total economic output.

This strategy, the so-called Western Development Strategy (Xībù Dàkāifā), combined massive centrally-funded technological improvements with rafts of national legislation to achieve three goals: the stabilization of the upper reaches of the Yangtse and Yellow River Basins; the stepped augmentation of raw material transport from the underpopulated far west to the resource-hungry east coast; and the modernisation of the West Triangle Economic Zone (the central industrial hubs of Chongqing, Chengdu and Xi’an), whose labour conditions had drawn the likes of Microsoft, Ford Motors and Citigroup, but whose distance from coastal ports meant any uptick necessitated significantly upgrading the extraction and transportation of Tibet’s substantial mineral reserves.

Probably the most dramatic of Beijing’s endeavours to offset its looming water crisis is the South-North Water Transfer Project. Costing $79bn by 2014, the project’s three massive canals, stretching 3000 km’s in total, carve through the landscape between the southern Yangtse and northern Yellow rivers, diverting 45 billion cubic meters of water per annum to the parched but demanding north. Such high modernist landmarks are however just the flagship in a wider slew of central government initiatives to stabilise and align water distribution. In the 1990s, forestry regulations were restructured to radically curtail destruction of “protective forest” across the PRC, but particularly on the eastern ranges of the Tibetan Plateau. In 2001, the Sanjiangyuan National Nature Reserve was formed to administer the combined headland region of the Yellow, Yangtse and Mekong Reivers on the Plateau. Cutting the Plateau in half, the Sanjiangyuan Area covers 363,000 kms2 (the size of England and Wales combined) with over 600,000 mainly Tibetan inhabitants, a large proportion of whom were until recently pastoral yak herders. The state has increasingly blamed pastoral herding practices for destabilising the loess grasslands at riverheads – claims that have been widely challenged by both ecologists and herding specialists – and under the banner of ecological protection and “turning pastureland into grassland”, some 90,000 nomads (many of whom, existing outside the cash economy, are designated as “impoverished”) have been settled in newly-built xiaokang housing complexes far from their traditional grazing grounds, with their yaks, goats and horses commandeered by the state.

At the same time, mining practices on the Plateau have been significantly upgraded and centralised. Since 2006 the fragmented mining endeavours already in place in Tibet have been systematically upgraded, largely with the help of imported Canadian mining technology. At the same time, imported heat-transfer technologies allowed railways to traverse Tibet’s permafrosted upper valleys, giving birth to the much celebrated Lhasa-Golmud-Xi’an-Beijing rail line in 2006. In the years following, rail expansion has continued apace across the Plateau, with links from Lhasa to Xigatse in the south, and plans for lines eastward from Lhasa to Chengdu, opening up the considerable copper and molybdenum belts there for transport to the Chinese mainland.

Mining, of course, is always going to be a dangerous business, no matter how much you upgrade it. Even excluding geological collapse such as the Gyama mine disaster outside Lhasa in 2013, large-scale mining activity has a profound impact on local groundwater systems, causing nearby deforestation and agricultural failure, the destruction aquatic wildlife and significant health hazards to local communities, effects which have led to growing protests by nearby Tibetan communities.

The solution to integrating the Tibetan Plateau into China’s economic transformations have more often than not meant the relocation and rehousing of local residents: in the last decade more than a third of the indigenous population of the Plateau have been resettled, often in the face of protest and petition, into the spaces in between mining sites, nature reserves and the region’s growing tourism and middle class influx from the mainland.

That such relocation aligns well with increased security in the troubled region is obvious enough: neatly lined housing complexes next to urban and semi-urban roads are far easier to police than scattered homesteads and mobile tent encampments. That it is sustainable in the long term is less clear. The costs of the Western Development Strategy are astronomical, and while most rehoused Tibetans are required to shoulder up to 75% of the financial burden of their own relocation in bank loans, the integration of the Plateau creates enormous ongoing drains on Beijing’s central coffers.

As rational as the Western Development Strategy may sound in balancing out China’s massive asymmetries, in practice, it hides conflicting priorities. Supporting the industrial requirements of the centre and east of the PRC involves very different infrastructural policies from the need to bring stability to the nation’s water supplies, and both of these conflict with the political need – clearly felt by Beijing – to incorporate the troublesome indigenous population of the Plateau into the larger Chinese body politic. Ultimately, as costly as they all may be, all three of these goals are secondary derivations of the driving forces found within the Chinese mainland rather than the actual development of the West itself. How these contradictory forces resolve themselves, in the long run, remains unclear.

Dr. Martin A. Mills is Senior Lecturer in Anthropology at the University of Aberdeen, Scotland and Director of the Scottish Centre for Himalayan Research. He is the author of Identity, Ritual and State in Tibetan Buddhism: The Foundations of Authority in Gelukpa Monasticism (Routledge 2003). Image Credit: CC by IM Swedish Development Partner/Flickr.

Iran & the United States: Continuity, not Change
Education as an Indicator of Power