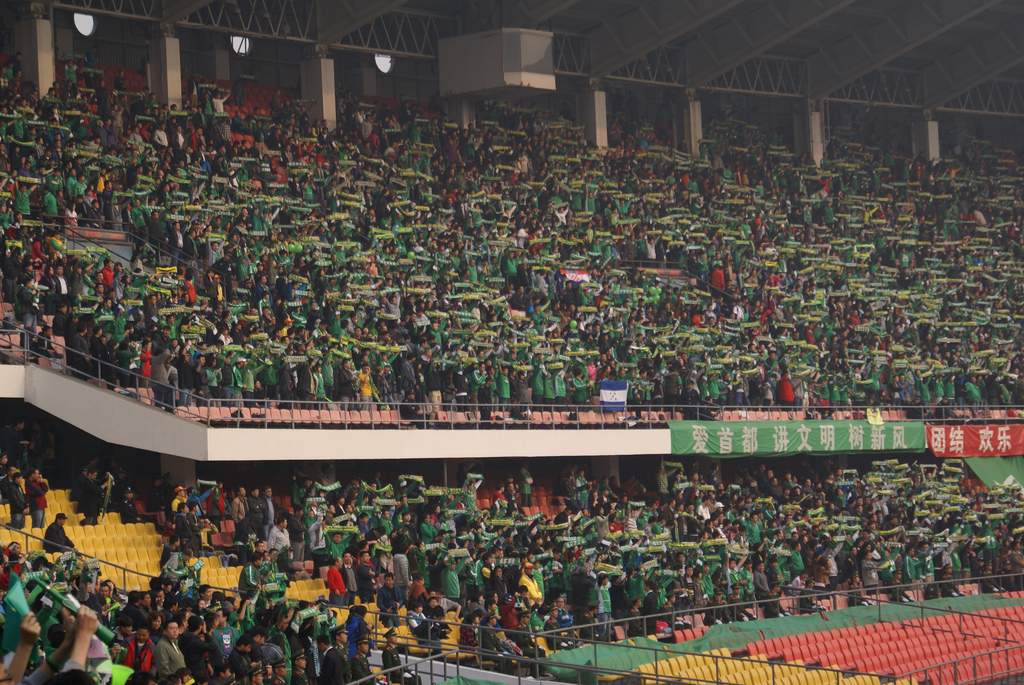 In late January of 2017, Sinobo Land Corporation purchased a 64 percent stake of Beijing Guoan for around $512 million (U.S. dollars), and took control of arguably the most popular professional soccer club in China. Despite being one of the most historically powerful teams in the Chinese Super League (CSL), Guoan has been in a state of decline since the turn of the decade as an influx of wealthy corporations and individuals have poured huge financial resources into several rival clubs.

Chief among Guoan’s rivals are Guangzhou Evergrande Taobao, which was purchased by the Evergrande Group in 2010 after the team had been relegated to China League One due to participation in match-fixing. Under the control of a large corporation owned by billionaire Xu Jiayin, Guangzhou Evergrande was provided with a wealth of financial resources allowing them to secure promotion back to the CSL in 2011, and immediately win the league title in one of the most dominant performances ever seen in Asian club football. Since re-joining the CSL in 2011, Guangzhou Evergrande has won the league title every year, as well as two Chinese FA Cups, and two Asian Champions League titles.

Following Evergrande’s lead, other teams in China such as Jiangsu Suning, Shanghai SIPG, and even CSL newcomers Tianjin Quanjin have all started to invest substantial sums in both player and coaching talent to compete with Evergrande on and off the field. However, as Evergrande and other new teams have been purchased by wealthy corporations which have provided financial backing to buy some of the best talent in the world, it has been many of the traditional teams in China which have ended up suffering. For example, Dalian Shide football club were once considered to be one of the top clubs in Asia, but in 2012 they were purchased and merged with their crosstown rivals Dalian Aerbin who had only existed as a professional club for two years.

Amidst all the financial changes that have occurred in the CSL, Beijing Guoan managed to remain one of the most popular teams in the country, backed by an energetic fan base and a long tradition of strong performances in the CSL and prior professional and semi-professional leagues. For example, in 2009 when Guoan last won the league title, they averaged an attendance of over 36,000 people per game, while the rest of the league averaged 16,059. Since Evergrande entered the league and dominated it in terms of on-field performance and attendance, Guoan managed to remain competitive finishing top three in the league for three of the last five years.  Many Guoan fans were excited about the potential of what the club could accomplish with the financial backing from the Sinobo Corporation.

Despite having increased financial resources to improve the team, Guoan’s performance continued to decline under the new ownership group. Currently, Guoan is on track to miss out on a top-three spot in the league for a third year in a row, something which fans have not seen since the early 2000’s. From the perspective of the fans of the club, the real problems at Guoan have only become worse under the new ownership group, who fans on Chinese social media platforms were quick to point out have no understanding of football or how to run a club.

To begin with, the Sinobo group backed the hiring of former Japanese national team manager Alberto Zaccheroni, yet he was fired nine games into the 2016 season with the team in the bottom half of the CSL table. For the 2017 season, the team hired Jose Gonzalez with the ownership group again claiming that this was a great move for Guoan. However, after losing 5-1 away to Shanghai SIPG, and at home to Hebei China Fortune by three goals, the Guoan fans began to express their anger.

In the past several weeks, Guoan fans have taken to WeChat, Weibo, and other popular Chinese social networking sites to voice their frustration with the team and the ownership group. Perhaps the greatest issue that fans pointed out was the changes to the front office and technical staff, which included the firing of many longtime Guoan staff members, and replacing them with people who have had little to no experience in managing football clubs. When combined with the blowout losses to teams that are higher than Guoan in the table despite having only been formed in the last seven years, the Guoan social networking sites and groups boiled over with anger. At the end of May, Guoan supporters presented a new proposal to Sinobo saying that Sinobo should give back the name “Guoan” to the fans, and should move out of the Workers Stadium in Beijing. In essence, the Guoan fans have started to use phrases like “not my Guoan” or “we want our Guoan back” as part of a movement to try and drive away the Sinobo ownership group and hopefully regain control of the club.

Following this recent outpouring of anger from the supporters, and a large decline in attendance at matches from previous years, Guoan fired coach Jose Gonzalez only 10 matches into the season, and replaced him with Roger Schmidt who had previously managed Bayer Leverkusen. Gonzalez’s firing was one of six sacking of coaches in a one-month period in the Chinese Super League, something which has become more common with the growing expectations that are placed on coaches in the league. From all of this, Guoan, who have experienced years of success in the league, now find themselves in a difficult situation.

While the club now has the financial backing to compete with Evergrande, it is the case that they have been surpassed by a number of other new clubs in regards to performance and obtaining talent. Additionally, as the team has continued to remain under ownership of the Sinobo corporation, it has been the case that the fans have become more disinterested with the team. While Guoan is not in danger of being bought out or shut down as some other Chinese soccer clubs have, the club does face major challenges in terms of regaining the trust of fans and producing a quality product on and off the field. If Guoan fails to do this, it is certainly possible that they will continue to witness an erosion of consumer interest in the club.

Persecuted (almost) to the end: Why Liu Xiaobo should be allowed to leave China
Of Land and Activism: A Glimpse into Hong Kong’s Documentaries on Farming