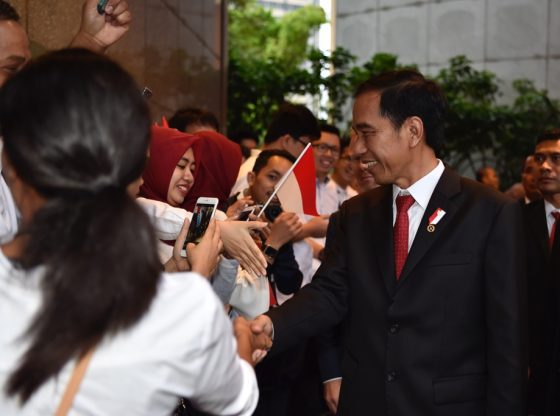 In May, the governor of Jakarta, Indonesia – a Christian – was convicted for blasphemy against religion and sentenced to two years in prison.

The conviction has shocked observers around the globe. Since the country’s democratic transition in 1998, American politicians on both sides of the aisle, from Democrat Hillary Clinton to Trump’s Vice President Mike Pence, have praised Indonesia as a model Muslim-majority democracy.

Governor Basuki “Ahok” Tjahaja Purnama was convicted based on comments he made on the campaign trail in September 2016. He had stated that Islamists who cited a Quran verseto support their view that Christians should not hold high office were being deceitful.

An edited transcript of his speech, which made it appear as though Ahok was criticizing the Quran itself, was posted online. The video went viral. Islamist vigilante groups seized the moment to rally against the incumbent Christian governor and in support of Ahok’s opponents in the April 19 election.

It was a winning strategy.

They held the largest rally in Indonesian history “in defense of Islam.” Their movement propelled Ahok’s opponent into the governor’s mansion and Ahok into prison. Some observers saw Ahok’s 16-point defeat as a victory for Islamists, and a sign of the influence of an intolerant strain of Islam.

Since Indonesia’s democratization in 1998, it has been widely seen as a model of religious tolerance and pluralism in the Muslim world. Is Indonesia’s tradition of religious tolerance a thing of the past? Will Indonesia backslide into authoritarianism like its neighbors Thailand and the Philippines, or be taken over by Islamists like Turkey, Iran and Saudi Arabia? Or, might militant groups like the Islamic State (IS), which has already gained a foothold in the Philippines, make further inroads into Indonesia?

Drawing on more than 24 months of field work in Indonesia, I tackled these questions in my book on Islam and tolerance in this massive Muslim-majority democracy.

Neither secular nor theocratic

Indonesia is the world’s largest Muslim-majority country, a democracy and the largest country in Southeast Asia. It faces many of the same problems as other developing countries, including weak infrastructure, low-quality education and high levels of corruption. Composed of over 17,000 islands, Indonesia is also one of the world’s most diverse countries, which means that protecting minority groups is an especially important concern.

Now, to be clear: in my view, Indonesia’s law prohibiting blasphemy or the defamation of religion is oppressive. It suppresses free speech and individual rights. It invites abuse and enforcement by vigilante groups. But that does not mean Indonesian democracy is destined to become a theocracy in which government policy is divinely inspired.

It is one of a body of laws that, as my research revealed, have been on the books for decades. Contrary to what some observers have suggested, these laws are not a result of Islamic extremism from Saudi Arabia or IS. Instead, they reflect the views of Islamic civil society organizations. These organizations run thousands of schools, health clinics and universities, and provide the backbone for the civil society that helps make democracy work.

For example, the Indonesian government makes religious education mandatory. Students can choose from Islam, Hinduism, Buddhism, Confucianism, Roman Catholicism or Protestant Christianity. All six religions are recognized and celebrated by the state. The Indonesian government obliges citizens to declare adherence to one of those recognized religions, restricts interfaith marriage and limits activities that it sees as interfering with communal rights, such as interfaith proselytizing (attempting to convert people) and blasphemy.

Americans have a hard time understanding this nonsecular form of democracy.

Based on our own Constitution, we tend to assume that democracy requires a secular state in order to protect religious minorities, who would suffocate under religious rule. But there are many examples of democracies that, like Indonesia, are neither fully secular nor theocratic.

Take Greece, a consolidated democracy. The Eastern Orthodox Church of Christ plays a prominent role in Greek state ceremonies, the education system and even the conferring of building permits. In fact, the salaries of clergy are paid by the state. According to the Greek Constitution, alterations or translations of the Bible from Greek are prohibited without permission from the church. And, although infrequent, blasphemy cases can be brought before civil and criminal courts.

In India, another democracy, all religions are defined as equal, and major religious communities enjoy state patronage. Religious holidays from several religions are observed as public holidays. Religious affiliation is noted on birth certificates. The state subsidizes Hindu, Sikh and Muslim pilgrimages. And blasphemy is prohibited by the penal code.

Greece, India and Indonesia are examples of democracies that are not quite secular. We might call them “pious democracies.” They promote religious values while trying to synthesize liberal individual rights and group rights. These states are not unusual. Globally, majorities in more than 20 countries say that belief in God is necessary for a person to have good values. These views shape public policies.

In Indonesia, the emergence of militant Islamists like Hizbut Tahrir Indonesia and the Islamic State has made it difficult for moderate Muslims to implement their vision for a pious democracy. The high profile of militants makes it difficult for the American public to understand the difference between militants and moderate Muslims. They are similar in that neither militants nor moderates want a secular state. But they are different in that moderates do not want to live in an Islamic state.

Data from a global network of social scientists, the World Values Survey, show that in 2006 the overwhelming majority of Indonesians did not want a government in which religious leaders tell people how to vote. More recent data suggest not much has changed. A poll conducted in May 2017 shows most Indonesians oppose replacement of the constitution with a caliphate. More than 80 percent oppose IS, and less than 3 percent support the goals of IS, according to recent data from a research and consulting firm based in Jakarta. In other words, most Indonesians, a majority of whom are Muslim, do not want to live in a caliphate.

But they do want mandatory religious education, leaders who believe in God and a society in which religion is valued by the state. As I discovered through hundreds of interviews, most Indonesian Muslims seek a state and society that promotes religious values and the rights of religious communities alongside individual rights and religious pluralism.

As my interviewees explained, their goal is a society in which individuals, organizations and the state are partly responsible for one another’s moral condition.

Putting that vision into practice is exceedingly difficult at a time when secularism is often equated with tolerance, and religion is synonymous with extremists like IS. Whether in India, Greece or Indonesia, group rights are challenging to enforce in a just manner – just look at Native American control over their land in the U.S.

But, as India and Greece demonstrate, it is possible. And in that respect, Indonesian Muslims’ war against blasphemy and Ahok’s prosecution is simply another moment in a long struggle to develop a pious democracy while avoiding the templates of secularism or theocracy.

Jeremy Menchik is an Assistant Professor of International Relations at Boston University. This article was first published on The Conversation and can be found here. Image credit: CC by Australian Embassy Jakarta/ Flickr.