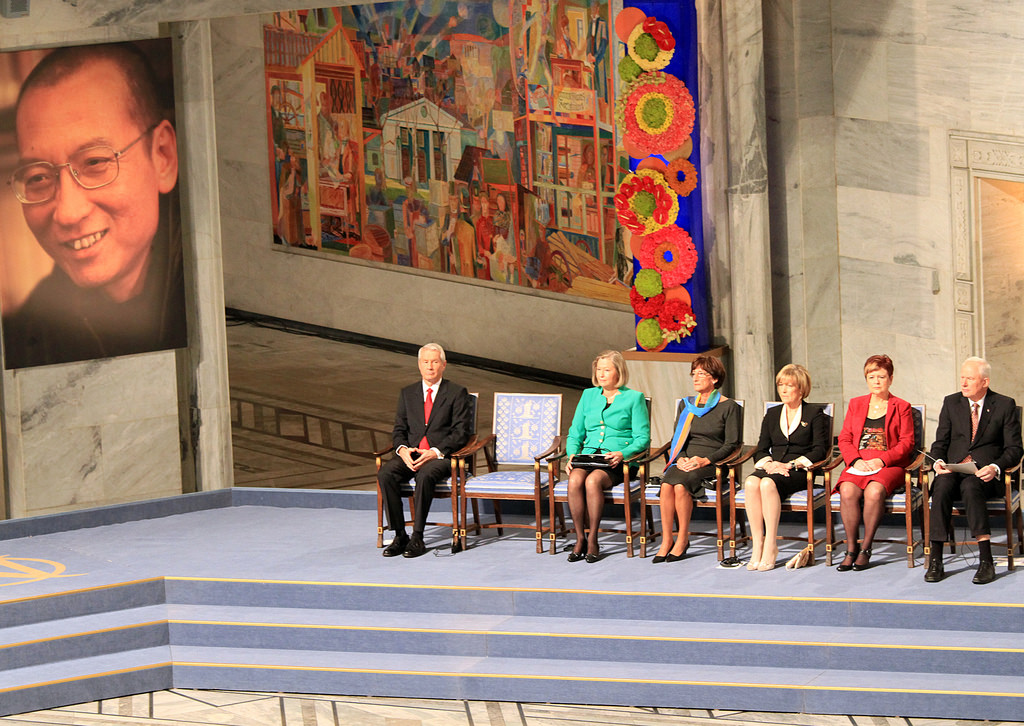 Norway’s ‘normalised’ relations with China, under which it has promised it “will not support actions that undermine” “China’s core interests and major concerns,” have been tested after the Chinese government revealed Liu Xiaobo 刘晓波 was terminally ill. The administration of Prime Minister Erna Solberg refused to discuss his imprisonment, calls for him and his wife Liu Xia 刘霞 to be allowed to travel abroad, and his death. The experiment has been successful: Norway has proved exceptionally easy to influence through sanctions, at essentially no cost to the Chinese government, setting the stage for further enforcement of Chinese policy in the larger region.

A holiday from human rights

The government only commented on Liu’s illness through a foreign ministry spokesperson, who found the news about Liu’s diagnosis “sad.” He had earlier explained why Norway declined to raise Liu’s case during Solberg’s Beijing visit last April using a no-sex-on-the-first-date line of argument: “This first visit [was] not the right time to go into the full breadth of all issues.” After Liu’s death, the only official statement, attributed to Solberg, called him “a central voice for human rights and China’s further development,” and stated her “thoughts” are with his family. Minutes before the press release was posted, Aftenposten was told Solberg was “on holiday” and wouldn’t answer questions on the matter.

In 2009, while in opposition, Solberg had hoped Norway would be like “fireworks” in the UN Human Rights Council, as opposed to the government of the time, under which Norway had “chosen to tone down criticism” of the human rights situation in other countries. Questioned by the press over how those remarks squared with her silence on Liu, she said she still thought Norway should be pyrotechnical about human rights, although in ways “that are functional, and do something meaningful.” Although she sees “no contradiction” between her earlier statements and her actions as prime minister, her silence on China’s human rights situation could be called a rather extreme form of ‘toning down criticism’ and her Norwegian “fireworks” a bit of a damp squib.

To assess the effects of China’s ‘normalisation’ of Norwegian government policy and discourse, it’s important to determine if the politicians in power at the time find human rights unimportant out of a sincere ideological conviction, or have just taken a holiday from the issue. Solberg is on the record as approving the Nobel to Liu and “the link between respect for human rights and peace,” but past remarks by Jan Tore Sanner, current minister of local government and modernisation in Solberg’s administration, provide a clearer answer. Sanner was among those who nominated Liu for the peace prize. He rejoiced when “[his] man” won: “we cannot turn a deaf ear when China violates human rights,” which are a “universal”, not just Western, value. In early 2011, he met with Chinese dissidents, including Yang Jianli 杨建利. Later that year, he attacked the government’s silence on Liu: one shouldn’t only defend human rights “when it costs nothing.” Relations with regimes like China’s “must be combined with a clear line on human rights issues.” Norway “must demand Liu Xiaobo’s freedom” and “lead international pressure to improve the human rights situation in China.” In 2012, he lit “a candle” for the imprisoned Nobel laureate.

In 2013, he became a minister. His outspokenness about China ceased abruptly. He refused to talk about Liu during his illness, despite headlines recalling his earlier stance. When he died, his ministry informed that he was “on holiday.” Sanner’s earlier advocacy for Liu makes it hard to imagine that he sincerely sympathises with China’s authoritarian regime. Sanner and Solberg’s Conservative party (Høyre) is a centre-right, pro-market, pro-European force, a poor ideological match for the PRC. Under Normalisation, voices clearly unaligned with Chinese policies have gone silent. Statements of ‘sadness’ over Liu’s illness and death are consistent with the PRC’s official line, only mildly challenged in the ‘central voice’ press release.

Norwegian media has been filled with criticism of the administration’s silence. Politicians from across the political spectrum expressed disappointment, with Petter Eide of the Socialist Left Party (SV) calling the administration “useful idiots” who will “do exactly what China wants.” Solberg, he speculated, must have felt “relieved” when Liu died. Jan Arild Snoen, a journalist with centre-right sympathies, regretted the government’s choice of “fish over human rights.” Torbjørn Færøvik, a writer and frequent commentator on China, warns that Norway “is influenced by China, not the other way round.” Sofie Høgestøl from the University of Oslo’s human rights centre writes that “Liu’s case shows that Norway’s normalisation agreement with China deserves greater public debate.” Several newspapers published editorials attacking Solberg over Liu.

Several commentators have compared Liu’s case to that of Carl von Ossietzky, the only other Nobel peace prize winner prevented from collecting the award. The similarities are obvious: both Nazi Germany and the PRC treated their laureates as traitors, lobbied against the prize, saw the Nobel as an affront, reacted with sanctions (symbolic in the German case, compared to the PRC’s unofficial salmon boycott). In each case, the Norwegian government distanced itself from the Nobel committee’s decision. Just like Liu, Ossietzky was prevented from travelling to receive the prize and died of tuberculosis in 1938. Both cases prompted the creation of alternative prizes. Hitler’s, called Deutscher Nationalpreis für Kunst und Wissenschaft, was awarded to, among others, Alfred Rosenberg. A Chinese anti-Nobel, the Confucius Peace Prize (孔子和平奖), never received such high-level government endorsement and proved unpopular even among its laureates, who have included Vladimir Putin, Fidel Castro and Robert Mugabe. While Nazi Germany only applied symbolic sanctions on Norway, the PRC imposed an unofficial boycott on Norwegian salmon. A Dagbladet editorial in early July feared “the biggest scandal in the history of the Nobel prize” was about to “repeat itself” as Solberg “wash[ed] her hands” over Liu’s case.

Criticism also came from abroad. Beijing-based dissident Hu Jia 胡佳 told Aftenposten he found it “unbelievable” that PM Solberg “has been elected by the people in a democratic country, the country where the Nobel peace prize is awarded.” When she visited China in April, she “behaved like just a salmon seller” without saying a word on human rights or Liu. Yang Jianli, whom Sanner and his party had once hosted in Oslo, called the government’s silence “a shame”: Norway lacks “a moral compass.” Norway’s commitment to global human rights has lost credibility.

Your ichthyology determines your ideology

Solberg plainly admitted the government fears angering the PRC government by speaking up: “important global processes” mean Norway “must have a relationship with China,” which is why their “viewpoints on the Xiaobo [sic] issue [Xiaobo-saken]” were only conveyed through a spokesperson. Solberg’s apparent unawareness that Xiaobo is Liu’s given name provides a first glimpse of the level of expertise on ‘global processes’ at the top of Norwegian decision-making.

Norway’s choice of ‘salmon over human rights‘ isn’t simply a pragmatic decision to prioritise the economy over principles or soft power. It displays a level of understanding of the relevant variables entirely consistent with the global know-how evidenced in Solberg’s familiarity with Chinese personal names. As I discussed in an earlier piece, Chinese sanctions had a negligible effect on Norway’s economy. The Chinese boycott over Liu’s prize left the bulk of bilateral trade intact, and indeed Norwegian exports to China increased faster than to the rest of the world during the six-year freeze. The one significant industry hit by the sanctions was salmon farming, and only in terms of missed opportunities. The sector continued to grow despite the unofficial China import ban, and, according to research that accounted for various sanction-avoidance strategies besides official trade statistics, the true volume of salmon exports to China likely grew even under the boycott.

It’s hard to find an example of such a successful use of sanctions as the salmon boycott. At virtually no cost to China, an undeclared, partial import ban aimed at a rich country over which it had minimal economic leverage achieved the silence of a Conservative government that includes an erstwhile outspoken PRC critic. In a previous piece for CPI Analysis, I compared Norway’s ‘normalisation’ to Mongolia’s response to a similar Chinese tantrum, over the Dalai Lama’s latest visit. Mongolia, a less prosperous country whose economy is heavily dependent on China, placated Beijing’s wrath with a vague statement to domestic media. The argument that Norway had no choice but to yield to Chinese pressure overlooks the extent to which Chinese Arctic interests need Norwegian cooperation. No Norwegian attempts to resist, denounce or reciprocate the boycott were made known. One is left wondering what sort of expertise on China is available to Norwegian officials. This contrasts with comparatively savvier approaches to relations with, e.g., the EU or Russia. If the Norwegian government cares so much about interactions with China, they could benefit from learning to negotiate with its authorities from a more adult position than fearfully humouring the PRC’s whim, in exchange for the promise of an eventual permission to sell fish. This also holds for those among the opposition who stand a chance of forming the next government. Post-Solberg, today’s fierce China critics might just get normalised upon elevation to the cabinet, becoming the next Jan Tore Sanners.

Beyond Liu’s case, what Norway has ‘normalised’ is the use of economic sanctions as a tool of Chinese foreign policy in the region. PRC policies on free speech seem to apply in the Norwegian cabinet when it comes to Liu Xiaobo. The question now is which Nordic institution will be the next to offend the Chinese government the way the Nobel committee did, triggering a round of sanctions to normalise another country.

Jichang Lulu is an independent researcher and writes frequently on China’s interests in the Arctic. Image Credit: CC by Utenriksdepartementet UD/Flickr. The original version of this piece can be found on the author’s website.