Indie Music, Music Festivals, and the Performance Economy in China 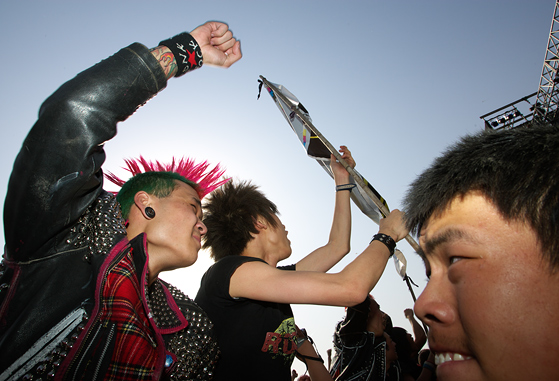 Who are the new popular Chinese singers? Music record companies that had conventionally produced commercial popular music are now almost inactive, and hardly any mainstream Chinese popular music now exists. Singers such as Na Ying and Liu Huan, who gained their fame in the 1990s, have now turned into judges of various singing contest television shows. Boy and girl idol bands such as TFBoy and SNH48 (and now BEJ48 and GNZ48) have emerged, but have limited appeal to anyone over the age of 18. Musical tastes have changed. Now, youngsters in China mimic, learn, practice, create, and are inspired by music of various western forms. Indie bands utilize distinct musical styles, from rock, punk, and metal to pop rock, post-punk, electronic music, reggae, and hip-hop.

The distinction between underground music and popular music has also become less obvious. 15 years ago, my interviews with indie bands took place inside record studios located in 1960s-built tumbledown mansions, bleak and ruined houses in dim Beijing alleyways, or underground buildings. My interviews with Song Ke (the managing director of Warner Music) and Zhang Hua (the A&R of EMI Music) were held in their nicely decorated commercial offices. But in the current context, with no record company capable of creating a national pop idol, the boundary between popular music and indie/underground music has become blurred. Contemporary bands are self-directed, independent, and control their own music styles. They perform indie music, but they are no longer underground.

Still, we do not see these artists on CCTV or other provincial television channels, but their songs and news about their music and discography are available on baidu, weibo or private groups on wechat. China’s music streaming platforms (QQMusic, Baidu Music, Sohu Music, and Xiami Music) offer all genres of indie music, and music video platforms (TencentVideo, Youku, Tudou, Aiqiyi, and Melon Video) also stream the works of these indie bands and singers. The internet has changed the entire music business model. CD releases still generate a portion of the revenue for indie music, but the volume of purchases is declining. According to the China Music Industry Development Report in 2016, the total volume of CD sales in China continued to fall, dropping to 559 million RMB in 2015, representing a 9% decrease compared to 2014.

Earning only meager revenues from sales of CDs and music products, musicians have been forced to look for smaller, more regular wage packets. Out of this predicament, a performance economy has emerged in the indie music scene. This development, it should be stressed, is by no means coincidental. It has been created by China’s political and economic conditions. First, at least at provincial and municipal levels, the authorities have supported the growth of China’s music festivals. They have sought to market these performances, expanding their cultural credentials in the process. Second, perceiving the prospect of a music festival as a cultural and profitable business, sources of private capital and state capital have rushed in. Modernsky, the organizer behind the most well-known music festival in China, Strawberry Festival, received investments of more than 380 million RMB from private capital from 2011 to 2015. It organizes around 15–20 music festivals every year, with around 30% of income generated through commercial sponsorship (interview with Shen Lihui, the major owner of Modernsky, May 2017). Over a hundred Glastonbury-esque music festivals are held nationwide, including the two famous MIDI and Strawberry Festivals. Not only is the scale of local performances growing, but an increasing number of foreign music bands are also being invited to perform.

At city level, it also seems that there are fewer cases of live music venues being shut down by the authorities. There are now around 30 small performance spaces in Beijing, from the small live bar School to the medium-sized Jiangjinjiu and the huge three-storey performance stage Candy. The total capacity of these live venues is around 10,000. Despite occasional shut downs, generally, the live performance market is expanding, and the number of venues is steadily increasing. For someone interested in the development of youth culture in China, it is exciting to observe that these blossoming music festivals and performances are grooming a large number of young audiences. 2.76 million people participated in music festivals in 2015. This exposure to live music can be profound. And if these events continue to spread alternative values and a worldview counter to that propagated by the state, then perhaps we will witness a new China to come.

Brawls in Taiwan’s Legislature: A Blemish, Yes, but Hardly a Way of Life
Hong Kong’s democratic struggle and the rise of Chinese authoritarianism