From Chinese missiles to US warships, the South China Sea is heating up

Home /Asia/East Asia/China/From Chinese missiles to US warships, the South China Sea is heating up 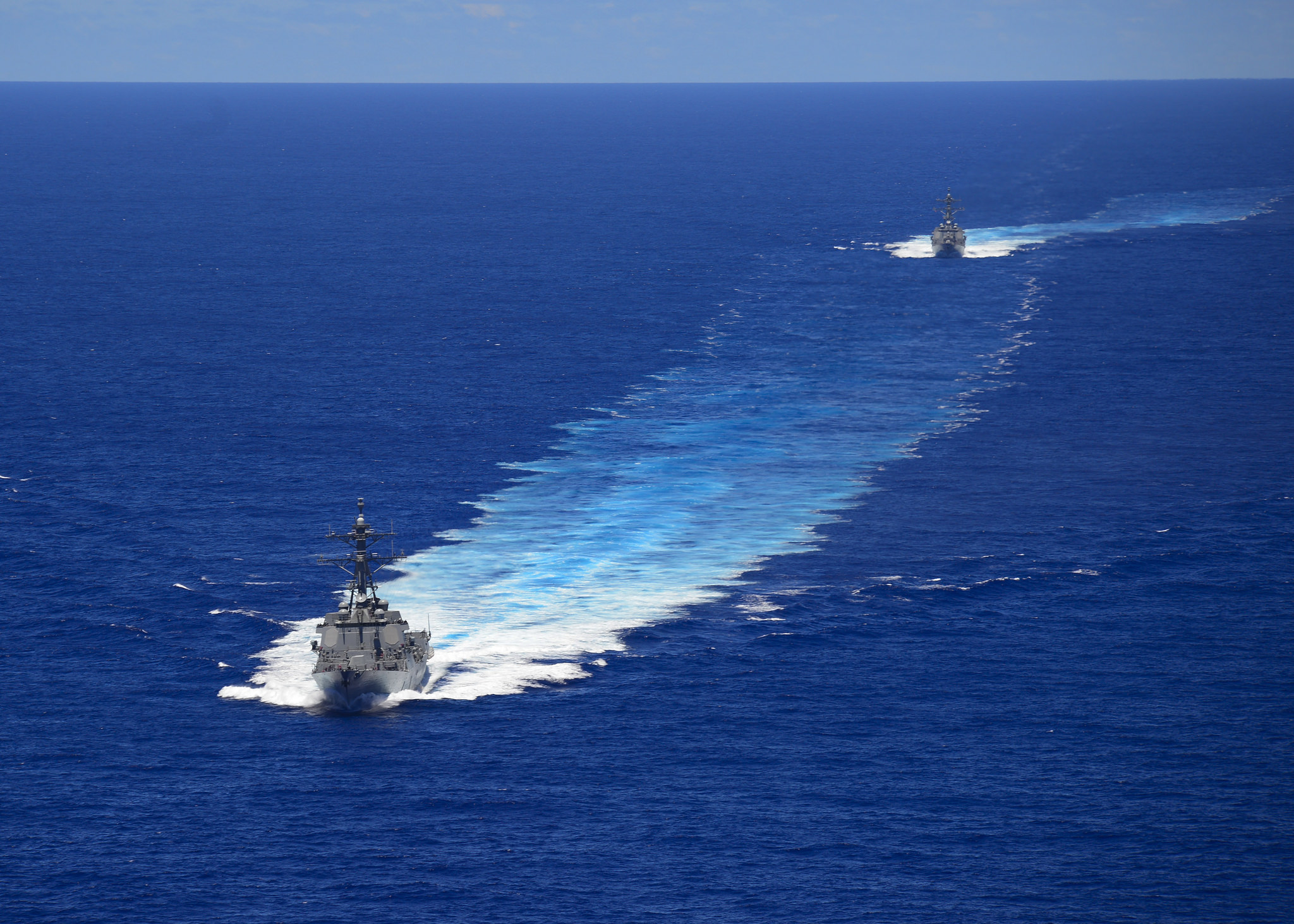 The volatile politics of the South China Sea continue to make waves.

China, Vietnam, Malaysia, Brunei, the Philippines and Taiwan have been fighting over this azure stretch of the Pacific for more than a century, but tensions have increased markedly in recent years as China, claiming the South China Sea as its own, has built on some 250 islands there.

Now the Asia Maritime Transparency Initiative (AMTI), a US think tank, has warned that China was building new military facilities on the disputed Spratly archipelago, off the coast of Phillipines, Malaysia and Vietnam.

On June 29 the organisation reported on its website that new satellite images show that missile shelters, communications facilities and other infrastructure are “near completion”, including those on Mischief Reef, which has been a symbol of China’s assertiveness in the South China Sea since the country occupied it in 1995.

Brunei, Malaysia, the Philippines and Vietnam, along with an arbitration tribunal, were already challenging China’s presence in the South China Sea.

The AMTI report could increase tensions with the United States, which insists that this trade route remain under international control.

Presidents Donald Trump and Xi Jinping were supposed to discuss the situation during their first meeting at Mar-a-Lago on April 5 2017. But the launch of 59 Tomahawks in Syria and growing tensions on the Korean peninsula completely overshadowed the maritime issue.

On May 24, the US triggered a confrontation cycle in the South China Sea by sending the guided-missile destroyer USS Dewey to pass through the contested waters, sailing close to Mischief Reef.

It was the first military maritime exercise in eight months and the first of Trump’s presidency.

American patrols in the South China Sea had been a regular practice under the Obama administration since 2015.

The South China Sea Freedom of Navigation Operations (FONOPS) is a US military program, open to regional allies (including Australia, Japan and the Philippines), in which the US leads maritime exercises in the area.

FONOPS is aimed at reiterating the inalienable principle of freedom of navigation in international waters laid out in the United Nations Conventions on the Law of the Sea (UNCLOS).

China disputes this application of the UN declaration and perceives FONOPS as essentially a unilateral American endeavour. The State Department asserts that the US can and will exercise its freedom of navigation on worldwide, without interference by any other country.

Warships, it has affirmed, should enjoy the same freedom as any other vessel, meaning free access to both exclusive economic zones (EEZ) and territorial seas without permission from the relevant coastal state.

China, which has also been in bilateral talks on the South China Sea with the Phillipinessince early this year, has a different interpretation. For Beijing, military vessels cannot enter a coastal state’s territorial seas without official permission.

It also claims that military ships in EEZ territorial waters are unlawful and suspicious, and only non-military vessels enjoy the right to passage.

The clash of unilaterality is clear here. For the US, ensuring the freedom of navigation throughout Asia-Pacific region is a national prerogative and a matter of vital importance.

As such, China – specifically, its military activities on some of the disputed South China Sea islands – is clearly its main obstacle. A confrontation appears unavoidable, but thus far interactions have cleverly been kept on a safe track because no US allies in Asia have joined the FONOPS exercises.

The Asia Maritime Transparency Initiative’s assertion that “Beijing can now deploy military assets, including combat aircraft and mobile missile launchers, to the Spratly Islands at any time” may unsettle that balance.

FONOPS, too, is often seen as a challenge to China’s claims in the South China Sea.

In fact, the freedom of navigation-focused operations are not explicitly aimed at questioning Chinese sovereignty in the South China Sea. But the US has a clear interest in preserving its role as a regional hegemon, and FONOPS could be seen as a provocation of Beijing and its divergent maritime stance.

During his first months in office, President Trump was accused of neglecting the South China Sea dispute and undervaluing the maritime routes encompassed in the Chinese Nine-Dash line. As the New York Times has reported, the Pentagon has on two occasions turned down requests by the US Pacific Command to conduct operations in the disputed waters, in February and April.

This has worried some US allies in the region, and may have encouraged others to start developing a more independent foreign policy.

Timing has thus far been key in the waltz between Washington and Beijing. The US needs China’s support in facing a growing number of global challenges, from terrorism to North Korea.

And with Trump already pushing China on trade, evidently his weapon of choice for addressing the nations’ multifaceted bilateral relationship, the administration may have thought it strategic to avoiding outright pressure on Beijing regarding the South China Sea.

FONOPS is part of this geopolitical balancing act. Relaunching operations in the region in May allowed the US to reassure Asian allies about its continued presence and gave China the chance to criticise the US for jeopardising regional peace, thus bringing that FONOPS cycle to a close.

Now, with the new US-reported satellite images of Chinese military development released, the ball is again in Washington’s court.

Alessandro Uras is a Teaching Fellow in Southeast Asian Studies at the University of Cagliari. This article was first published on The Conversation and can be found here. Image credit: CC by U.S. Pacific Fleet/Flickr.