In Between Places: Migration Among Cambodia’s Coastal Communities 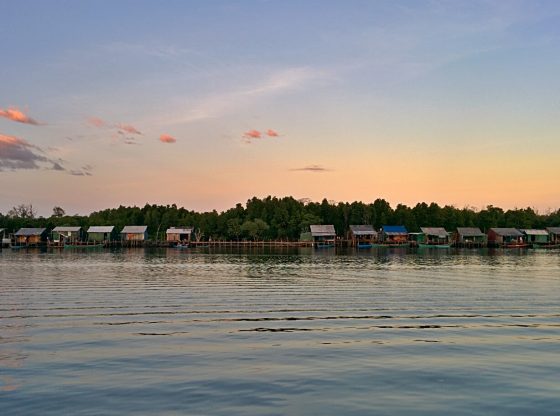 Cambodia and its people are no strangers to migration. The movement of people has defined the country throughout history, catalysed by environmental change as far back as the Angkorean period and, in more modern times, by conflict, during the pre- and post-Khmer Rouge period.

Most recently the catalyst has been globalisation, resulting in research attention largely being paid to labour migrant flows into neighbouring countries. To this end, the International Organisation for Migration (IOM), states that it “aims to support the RGC [Royal Government of Cambodia] to enhance management of outward labour migration flows to neighbouring countries, particularly Thailand and Malaysia.”  At the same time, contemporary research on internal migration in Cambodia has been relatively understudied.

For migrants, while they do appreciate the stable, regular income that jobs in the city provide, many long to return to the village because they have ‘more freedom’. On the one hand, their hearts or minds are on their former coastal fishing life. On the other hand, they reside in the city, amidst, traffic, air pollution and food of questionable quality, but earning much-needed income.

In a country where the majority of the population remains rural, supported largely by natural resource-based livelihoods, it is important to understand internal migration dynamics, particularly given the impacts that environmental change has had, and will continue to have. Among these, one of the most important is fisheries.  Fisheries touches practically every Cambodian — either through diet (Cambodians have some of the highest per capita fish consumption in the world, upwards of 63.5 kg/capita/year by FAO estimates) or by providing jobs and income (the fisheries sector employs up to six million people across full-time, part-time and seasonal categories). Situated within this context, my doctoral research sought to understand the implications of migration of coastal fishing household members, focusing on three coastal fishing villages near Koh Kong town in southwest Cambodia.

Three notions in particular played out in each of the three coastal communities studied: those of expectations, aspirations, and place. Traditional norms in Cambodia have dictated that young women are expected to stay at home until they are married, while men often (though not always) leave home to pursue other jobs, go to school or obtain new skills. More recently, these historical and cultural norms have come in conflict with what is occurring in many households in the coastal fishing villages of Cambodia: young women are leaving home to work in the nearby factories of the Special Economic Zone (SEZ) of Koh Kong town near the Thai border.

At the same time, there has been a shift in aspirations among young men and women in the fishing villages. Women are expressing the sentiment that they are ‘not doing much’ when they stay at home and are not contributing to the household income. This sentiment is often expressed against the backdrop of an economically deteriorating situation along with a growing sense of duty and responsibility to help their family. Both socioeconomic factors along with cultural norms play a role in explaining why young women in coastal fishing villages are deciding to pursue work outside the home. Many of them aspire to obtain jobs at the factory after hearing of peers who have done so.

The aspirations of the young men are often driven by the erosion of the resource base that has sustained coastal fishing communities in Cambodia (tied to increased fishing pressure, illegal/outsider fishing, and most recently, sand mining). Declining fish catch (or an increasingly unpredictable catch) has required investing in new equipment. Paying for this equipment has been via loans from microfinance institutions. Often, this is the start of a cycle of debt for many fishermen. Many of the male youth, upon seeing this, either when working alongside their fathers, or experiencing it themselves, have started to view fishing as a livelihood fraught with risk, debt, and a bleak future. While robust statistics of catch numbers by coastal fishing households are hard to come by (due to lack of detailed record-keeping), the anecdotal evidence given by the fishers’ recollection of their own catch highlights the deteriorating conditions of marine resources. As one fisher from Koh Sralao village noted, ‘three years ago, I could catch 8 to 10 kilograms per day, but now I get only 2 or 3 kilograms’.

Lastly, the notion of place plays an important role. ‘No matter what happens to me, I won’t abandon this village because I have always regarded it as my hometown’, said one fisher from Koh Kapic village. This reoccurring sentiment regarding the coastal village as their ‘hometown’, despite not having been born there, showcases strong attachment to the village as a place (also known as ‘place utility’) and, indeed, for many forms a part of their identity.

For migrants, while they appreciate the stable, regular income that jobs in the city provide, many long to return to the village because they have ‘more freedom’. On the one hand, their hearts or minds are on their former coastal fishing life, whether it be the beautiful coastal landscapes of mangroves, the fresh seafood, the purity of the ocean breeze, or their tight-knit relations with family and neighbours. On the other hand, they reside in the city, amidst strangers, traffic, air pollution and food of questionable quality, but earning much-needed income (for themselves and their family), often out of necessity or a sense of responsibility. In this sense, many migrants (particularly those in Phnom Penh) are caught in between places. Asked if they would like to return to the coast, many express their desire to return. When the question of when is brought up, they reply ‘when the fish come back’.

Furqan Asif (@furqan_asif) is a PhD candidate in International Development at the University of Ottawa (Canada). His research focuses on understanding the relationship between migration of coastal fishing households and social resilience and wellbeing. He can be reached via his website, www.furqanasif.com. Image credit: Furqan Asif.