Democracy continues to be undermined in Cambodia

Home /Cambodia, Democracy/Democracy continues to be undermined in Cambodia 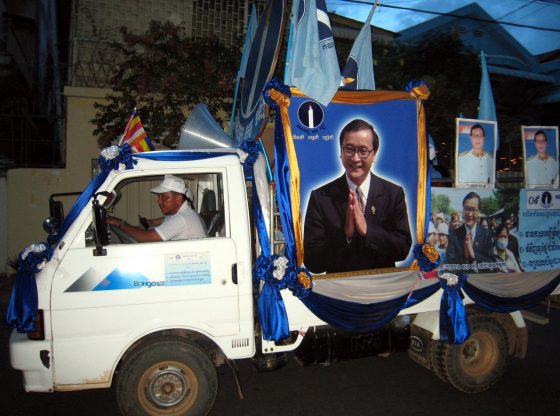 Cambodia’s elections are always a bell-weather of peace and human rights in the country.

In the 4 June 2017 local commune elections, seven million people, more than 85 per cent of registered voters, peacefully turned out to elect 12,000 representatives in 1,646 communities around the country. Observers found some noticeable irregularities, but in comparison with past elections, the polls went ‘smoothly.’ Yet the commune elections were no harbinger of peace. For months during the run up to the elections, long-ruling Prime Minister Hun Sen and his Cambodian People’s Party (CPP) demonstrated a long-familiar pattern of violent threats and deployed another potent weapon – the law.

The CPP was relieved to win 70 percent of the commune chiefs’ seats. The party maintained its hold on the reins that extend deep into Cambodia’s countryside but lost its ‘virtual monopoly on rural power.’ The CPPs share of the popular vote shrank from 60 percent in 2012 to 51 percent, and 400 communes went to the opposition Cambodian National Rescue Party (CNRP). The CNRP received 49 percent of the popular vote, up from 30 percent in 2012, but the party fell short of its 60 percent target.

Prime Minister Hun Sen has consistently ignored or violated Cambodia’s human rights obligations and the Constitution in his steady determination to consolidate CPP control over the country, all its institutions, and civil society.

Misuse of laws in the run up to the commune elections

Was the commune election ‘free and fair’? The mixed opinions include a resounding ‘no’ from Human Rights Watch. As in previous election campaigns, the Prime Minister warned of civil war if the CPP did not win. The Defence Minister threatened to ‘smash the teeth’ of opposition groups that demonstrated against election results.

The CPP also weaponised the law against its opponents. In February 2017, the government amended the Law on Political Parties to ban parties led by people convicted of criminal offences. The amendment specifically targeted the charismatic CNRP leader, Sam Rainsy, and caused him to resign his leadership. He had been sentenced in absentia to five years in jail on several criminal defamation charges in 2015. For good measure, Sam Rainsy was sentenced in March 2017 to two extra years of prison on added criminal defamation charges. To avoid prison, he remains in self-exile in France.

In September 2016, the current CNRP leader, Kem Sokha, was sentenced in absentia to five months in jail for failing to appear on dubious, politically motivated charges. He managed to negotiate a royal pardon last December which cleared the way for his participation in elections.

The CPP government also mobilised the law to intimidate Cambodia’s human rights NGOs. Five defenders from the Cambodian Human Rights and Development Association (ADHOC) were denied bail for more than a year after being charged in April 2016 with far-fetched, politically-motivated bribery charges. The “ADHOC Five” were released on bail a month after the election, but they still face trial.

The CPP is already utilising the law to assure a win in next July’s national election. In July, the government passed more amendments to the Law on Political Parties to ban political parties from using images of people convicted of criminal offences. The law targets Sam Rainsy.

On 4 July 2017, the Minister of Interior warned NGOs to comply with the Law on Associations and NGOs (LANGO), passed in 2015 despite local and international analysis that it violates Cambodia’s international law obligations and Constitution. The government also advised the Committee for Free and Fair Elections in Cambodia (COMFREL) and another election-monitoring NGO that their commune election monitoring activities had violated LANGO’s registration processes and requirements of NGO political neutrality.

Use of law to silence opposition and dissent: An old habit

The use of law against opponents is not new. Hun Sen has been Prime Minister since 1985, eight years before the historic 1993 elections organised by the United Nations Transitional Authority in Cambodia (UNTAC) as mandated by the 1991 Paris Peace Agreements. UNTAC is also credited for creating space for the development of Cambodia’s now vigorous civil society and human rights organisations.

Since then, Cambodia’s performance has contradicted its paper promises, including its 1993 liberal democratic Constitution and ratification of numerous international human rights treaties. Despite these official commitments, the CPP has resisted reforms that would put the Constitution and human rights treaties into practice. Despite UN and other international support of human rights and decades of support for implementation of liberal democratic rule of law, the CPP has established a ‘rule by decree’ legal culture used in tandem with violence and threats against dissenters.

Year after year, Western donors have provided hundreds of millions of dollars in aid, ignoring civil society urgings for rights-based aid accountability. Critics complain that this has fostered aid dependence and undermined the development of genuine democracy. A decade ago, the Cambodian human rights organisation, LICADHO, noted that despite millions poured into research, legislative drafting and training of court and law enforcement officials, the ‘political and financial influence over the courts is as strong as it has ever been, and there is nothing to suggest that this will change.’

Prime Minister Hun Sen has consistently ignored or violated Cambodia’s human rights obligations and the Constitution in his steady determination to consolidate CPP control over the country, all its institutions, and civil society. Over the decades, he and his allies have used threats, violence, corruption and laws to gain control of the military and police, the socially-powerful Buddhist clergy, the Khmer-language media, the courts, and the legal profession. For decades Cambodia has been increasingly beset by elite land-grabbing, rapacious environmental destruction, and marginalisation of the poor, minorities, and indigenous peoples.

There is no public trust in Cambodia’s corrupt and politically-aligned courts, police, lawyers, or public officials. Journalists and civil society actors who expose lawlessness and corruption or resist the powerful are subjected to threats, harassment, and sometimes murder, usually committed with impunity. Rarely is there any accountability for vicious attacks on opposition parliamentarians, journalists, environmentalists, or rights defenders. Community-based rights defenders from urban, rural, and indigenous communities, along with NGO workers, journalists, trade unionists, and opposition parliamentarians, regularly face legal action or other threats ‘simply for promoting and protecting human rights.’

Western donors’ aid commitments to Cambodia have declined over the past several years, and this year’s threat by the United States to cut aid is expected to affect Cambodia. Critics continue to warn remaining donors that aid and trade must be tied to human rights. Over the past decade, increasingly tepid legal development assistance by Western donors has now all but dried up in the face of the CPP government’s foot-dragging and lack of serious effort to curtail impunity, corruption, and human rights violations. Cambodia now increasingly relies on aid from China, which has no interest in liberal democracy or human rights.

Cambodia’s poor human rights performance continues to disappoint the architects and supporters of the 1991 Paris Peace Agreements. The CPP is predicted to continue to misuse power in the run up to the 2018 national election. It seems unlikely that the CNRP can counter Hun Sen’s no-holds-barred determination to stay in power through pre-election manoeuvring, threats and legal obstruction of opponents.

Even so, results of this year’s commune election suggest that the power of Hun Sen and the CPP is waning. Cambodia’s youthful voters are better-educated, more politically engaged, and less easily intimidated than their elders who lived through war and the Pol Pot years. The CPP will retain its grip on Cambodia’s Khmer-language media, particularly television, but young Cambodians are avid users of social media. They are also less tolerant of Cambodia’s continued inequality, elite land-grabbing, corruption and rights abuses. While prospects for a change in government in 2018 currently seem doubtful, opposition parties will almost certainly further erode the CPP’s parliamentary majority.

Catherine Morris (@CatherineMorris) BA, JD, LLM, is an adjunct professor in the Faculty of Law at the University of Victoria, Canada. She is a director of Peacemakers Trust, a Canadian non-profit organisation for research and development on peace-building and conflict transformation. Her publications include ‘Justice Inverted: Law and Human Rights in Cambodia’ in The Handbook of Contemporary Cambodia (Routledge 2016). Image credit: CC by Bart Geesink/Flickr.