The Price of ‘Progress’ in Cambodia? 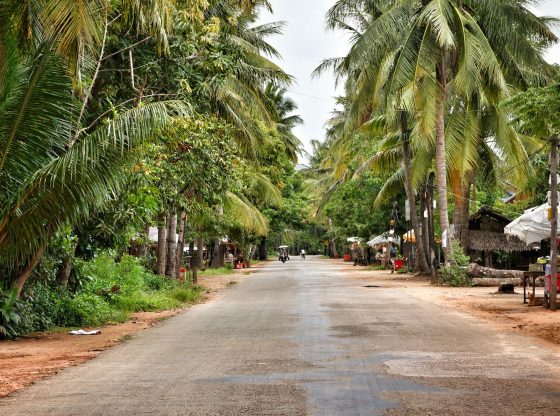 I have been conducting anthropological fieldwork on various topics in Cambodia since 2002. In the past fifteen years, the issue of environmental destruction in the name of ‘development’ and ‘progress’ has become increasingly pressing in Cambodia, as elsewhere. More and more, I found while doing fieldwork that no matter what the topic of discussion, it would almost inevitably lead to the ubiquitous issue of how the elite were taking forests, waterways, land and its hidden riches from under the feet of the poor. In this scramble for valuable resources, the plight of Cambodia’s so-called indigenous people illustrates a problem of global significance.

The complex ecologies of the moist tropical rain forests found in Cambodia’s highlands are of immeasurable value for humankind and our planet. They remove pollutants from the soil, water and air and contribute to the stability of the climate. The consequences of losing them include soil erosion, flooding, landslides, siltation, reduced groundwater supplies, loss of biodiversity among flora and fauna and ultimately threats to human wellbeing and health. These highlands have long been home to various groups of indigenous peoples.

The picture that emerges is that of a race by a powerful, internationally connected elite to capture the wealth remaining in the country’s rapidly diminishing natural resources for use in the global market. The more the ancient, biodiverse forests diminish, the greater the haste to take what one can while stocks last.

In 2016, Foster and Gray of the Associated Press wrote of the Bunong people in Cambodia’s north-eastern highlands, ‘For generations … [they] … were famous as the great elephant keepers and masters of the forests in eastern Cambodia. They called the fertile, rolling hills of their ancestral homeland ‘meh ne’ or mother — a source of food, livelihoods and self-identity’. But in 2008, the Bunong there found that the government had granted permission to the agro-industrial group Socfin to clear the forest for rubber plantations. In an interview in Brussels, Socfin CEO Luc Boedt, framing his company’s transformation of the land according to the familiar global logic of ‘progress’, told the Associated Press ‘We brought wealth to a place where there was nothing’.

What cases like this illustrate is the way in which today’s civilizing logic is manifested in the spread of neoliberalism. Absorbing more and more regions into the global market is the method promoted to ‘uplift’ uncivilized areas of the world. Current climate change policies propose no alterations to our current production-driven, consumption-oriented economy. Economic development is thus not only at the heart of the climate change dilemma, but paradoxically its furtherance is encouraged by international bodies such as the World Bank and UNDP as the solution. The Cambodian government has responded by starting to collaborate on so-called reforestation projects with companies profiling themselves as ‘sustainable’ and ‘eco-environmental’. However, these are largely transforming diverse landscapes into monoculture economic forests, and profits accrue to the owners while small-scale indigenous users of the forest, who protect its biodiversity, are becoming dispossessed.

Cambodia has one of the fastest rates of forest loss in the world. This is endorsed by both the Cambodian government and the international agro-industrial companies who all stand to profit by the transformation of these delicate ecosystems into monoculture plantations. The Cambodian human rights organization Licadho reported in 2012 that in the past decade, almost 4 million hectares (around 22% of Cambodia’s land area) have been awarded to companies by the government as agro-industrial and mining concessions.

The connections between high-ranking, politically well-connected officials and large business stakeholders who are targeting forested areas are tight. This was extensively documented by Global Witness in 2007, who concluded that Cambodia is being run by a kleptocratic elite that generates much of its wealth by seizing public assets, particularly natural resources. China’s hunger for luxury hardwood furniture is among the many incentives for the race to extract the huge, ancient trees that are the ecological backbone of these forests before they are all gone.

The Cambodian Land Law of 2001 enshrined the right of indigenous peoples to apply for collective land titles. However, in practice, there are significant obstacles to acquiring them. In 2009, a sub-decree was issued that required communities to register as legal entities before they could apply for collective titles (Article 3). There are thus three formal steps to securing collective land: 1) the Ministry of Rural Development must recognise a community as ‘indigenous’, 2) the Ministry of Interior must then register the community as a legal entity and 3) the Ministry of Land Management and Urban Planning should then issue a collective land title. This grants considerable power to local officials to decide who qualifies as indigenous and, consequently, who is entitled to apply for collective titles. As of 2016, of the 458 villages in which indigenous people’s are recorded as living, only 11 had been able to complete the registration process. Corruption, lack of political will and problems with maintaining cohesion in communities have all been cited as forestalling the issuance of titles.

These forest communities are neither homogenous nor are they simply passive victims of powerful figures and companies. While some see benefit from capitalist production and modernity and shedding the stigma of backwardness and poverty, others fear finding themselves cast adrift with neither land nor social capital in a predatory consumerist world. The question of who then has the right to represent the community or make decisions about its future is complex and reflects the fragmentary experiences and ideas present in the groups engaged in these struggles.

In February 2016, it was announced that after twenty years of trying to assist the Cambodian Land Management Ministry on pro-poor land rights, Germany was pulling out because it had proven impossible to reach consensus with the Cambodian government on major issues, particularly concerning transparency. Canada, Denmark, Finland and the World Bank had already quit. Recognising that institutional tactics for influencing the government and companies are futile, some indigenous communities have instead found violent protest to be a more effective way of making their voices heard. One Bunong community in Mondulkiri has been documented as successfully using violent resistance to gain significant concessions from the government and influence a rubber company to mitigate most of the adverse impacts on their community.

In May 2012, in the run up to the 2013 elections, the Royal Government of Cambodia declared a moratorium on the granting of economic land concessions (ELCs) and announced a review of existing ones. Soon after, Prime Minister Hun Sen issued Directive 01 – a million hectares of land to be withdrawn from ELC areas and awarded to families who claimed plots. Some 4,000 student volunteers were hurriedly dispatched to survey land and deliver titles to families free of charge.

However, Directive 01 contained no special provision for minorities claiming collective title. Families in Mondulkiri Province who had long been in dispute with rubber companies that were encroaching upon their ancestral lands now found themselves subject to students measuring up plots of their land for private titles. This had the effect of splitting the community into those who were willing to accept a private title and those who wanted to hold out in the hope of eventually receiving a collective title over a large area that would recognise sacred spirit forests and rotating farms instead of limiting ownership to the five hectares stipulated in the directive for private ownership.

NGOs continued to urge communities to register for communal titles but some accepted a private title rather than risk ending up with no title at all. Some local officials, perhaps themselves influenced by financial incentives from powerful figures, are reported to have threatened villagers that they would lose all their land if they did not accept the private titles.

While collective action by communities in the form of protests and acts of resistance have been gathering force in recent years – sometimes supported by monks with a strong, international reputation and online presence such as the Venerable Luon Sovath – outspoken individuals also run major risks. Cambodia is among the most dangerous countries in the world for grassroots human rights and environmental defenders. The environmental activist Chut Wutty was shot and killed in cold blood in 2012 (see Fran Lambrick’s documentary I am Chut Wutty). His was just one in a string of murders of Cambodian critics of the government. In July 2016, intellectual, political commentator and activist, Kem Ley was gunned to death as he sat drinking coffee at a petrol station in Phnom Penh.

Since the corrupt judiciary largely ensures impunity for the powerful, those popularly believed to be behind this kind of assassination in Cambodia are not held accountable – just prior to his death Kem Ley had been vocal about a highly sensitive Global Witness report on the wealth accumulated by Prime Minister Hun Sen’s family. The report had concluded that the family’s holdings span the country’s most lucrative sectors, including those characterised by high levels of corruption, human rights abuses and environmental damage.

The picture that emerges is that of a race by a powerful, internationally connected elite to capture the wealth remaining in the country’s rapidly diminishing natural resources for use in the global market. The more the ancient, biodiverse forests diminish, the greater the haste to take what one can while stocks last. Resistance by the forest’s inhabitants, with their long traditions of small-scale rotating agriculture and respecting the powers of the land upon which all humanity depends, may be the last hope for these forests and our common future.

Dr. Alexandra Kent is an associate professor and senior researcher in social anthropology. She has conducted studies in India, Malaysia, and Cambodia on various aspects of religious activity and social change. This piece has been adapted from the original version on the Dissident Blog (Swedish PEN Association) published 3 May 2017. The research upon which this article was based was sponsored by the Bank of Sweden Tercentenary Foundation, to whom the author wishes to express sincere thanks. Image credit: CC by ND Strupler/Flickr.