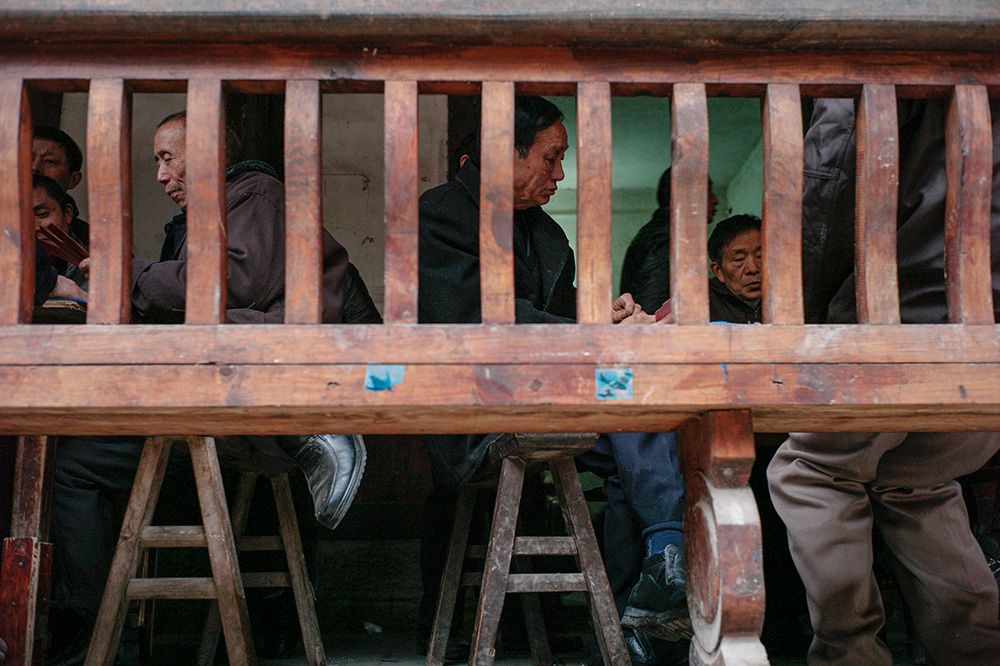 Surplus males have existed throughout China’s history due primarily to infanticide and polygyny. Even though these two phenomenons were eliminated after the founding of the People’s Republic of China in 1949, the sex ratio at birth (SRB) – usually measured as the number of male births to 100 female births – began to increase in the early 1980s. Normally ranging from 102 to 107, the SRB measured 108.5 in the 1982 census, 111.4 in 1990 census, 119.9 in the 2000 census, and 121.2 in the 2010 census. China’s abnormally high SRB has been the longest-lasting, widest in geographic coverage, and most severe in magnitude in human history.

High SRB has led to a volume of surplus males. It is predicted that currently 30 to 40 million Chinese males simply cannot get married, at least not in heterosexual, monogamous marriages. The census data shows that in 1990 5.1 percent of men aged 45–49 were unmarried, compared to only 0.2 percent of women. In 2000, 4.0 percent of men aged 45–49 were unmarried, versus only 0.2 percent of females in this age group. In 2010, the percentages were 3.2 percent and 0.4 percent, respectively. Chinese males will be confronted with a marriage squeeze for another several decades, during which around 10 percent of marriageable males will be squeezed out of the marriage market.

These surplus males have had a significant impact on China’s skyrocketing bride prices – the price (in cash or gifts) expected from a woman’s family in exchange for marriage approval. The increase is a result of many factors, including economic development and rising incomes, but oversupply of males has been an important determinant. The law of supply and demand has enabled women to wield stronger bargaining power in marriage negotiations, allowing them to exact a higher price. Men, who are at a disadvantage in the marriage market, have almost no bargaining power at all. It is this competition between men that has forced up the price.

The increase in bride price looks unlikely to peter out. If anything, it is a self-perpetuating cycle. In order to enhance their chances, males continue to bid higher and higher bride prices, forcing others to increase their offers also. Demanding a high price yields rewards. In 2011, a village in Henan was able to achieve 40 marriages, a significantly higher number than the surrounding villages. The reason was simple. Villagers had bid a bride-price of 50,000 yuan, significantly higher than the 40,000 yuan expected in the neighbouring villages. People in the surrounding area criticised the village for their action, breaking an unwritten rule on the acceptable price for a bride in the area.

Of course, men without sufficient means to marry are confronted with a cruel choice: either poverty prevents them from finding a spouse, dooming them to perpetual singlehood; or, being unable to pay the bride price, they postpone marriage in order to save enough money for a bride. Years down the line, they then find themselves in an even more disadvantaged position, and as a result must pay a higher price for their bride.

High bride price increases a family’s financial burden. Ordinary rural households save for many years, even taking out loans for their son’s marriage. For many families, marriage expenses have depleted parents’ resources, led families to incur heavy debts, and become an unbearable burden for parents. According to an interviewee in a village in Shandong province in eastern China, ‘In this village, there are not too many folks who have enough money to spend on marriages. Most of them have to borrow. After their sons get married, they still have to live frugally so as to slowly repay their debts. These folks have not really achieved anything in their entire life other than hosting a wedding for their sons.’

High bride price has also increased some alternative forms of marriage. Disadvantaged surplus males may purchase trafficked women as brides. This behavior usually wins sympathy and support from fellow villagers. The high bride price also leads to fraudulent marriages, widely reported across China, in which women pretend to marry but only at a high bride price. Once they have received the money, they flee. In one county of Inner Mongolia, there were over 200 cases of such marriages between 2000 and 2004, causing not only financial loss but occasional violence.

The shortage of females has increased female social mobility. A large number of women have been able to migrate from the countryside to the cities or from the poor south to the coastal, rich southern provinces through marriage. This spatial shift makes men from rural, destitute farmlands bear the consequences. The Chinese government is concerned with the issue of surplus males and the skyrocketing bride price, and China has witnessed a decline in SRB, which may help alleviate the competition for brides, especially for people in the lower social strata. Some local regulations have been issued intending to limit the prices paid, and these have functioned to some degree. But for China to make good on its promise of harmonious development, further countermeasures against this phenomenon will be necessary.

Quanbao Jiang is professor in Demography at the Institute for Population and Development Studies at Xi’an Jiaotong University. His research interests include gender discrimination, fertility behaviour and policy in China. Image Credit: CC by xingtu/Flickr.