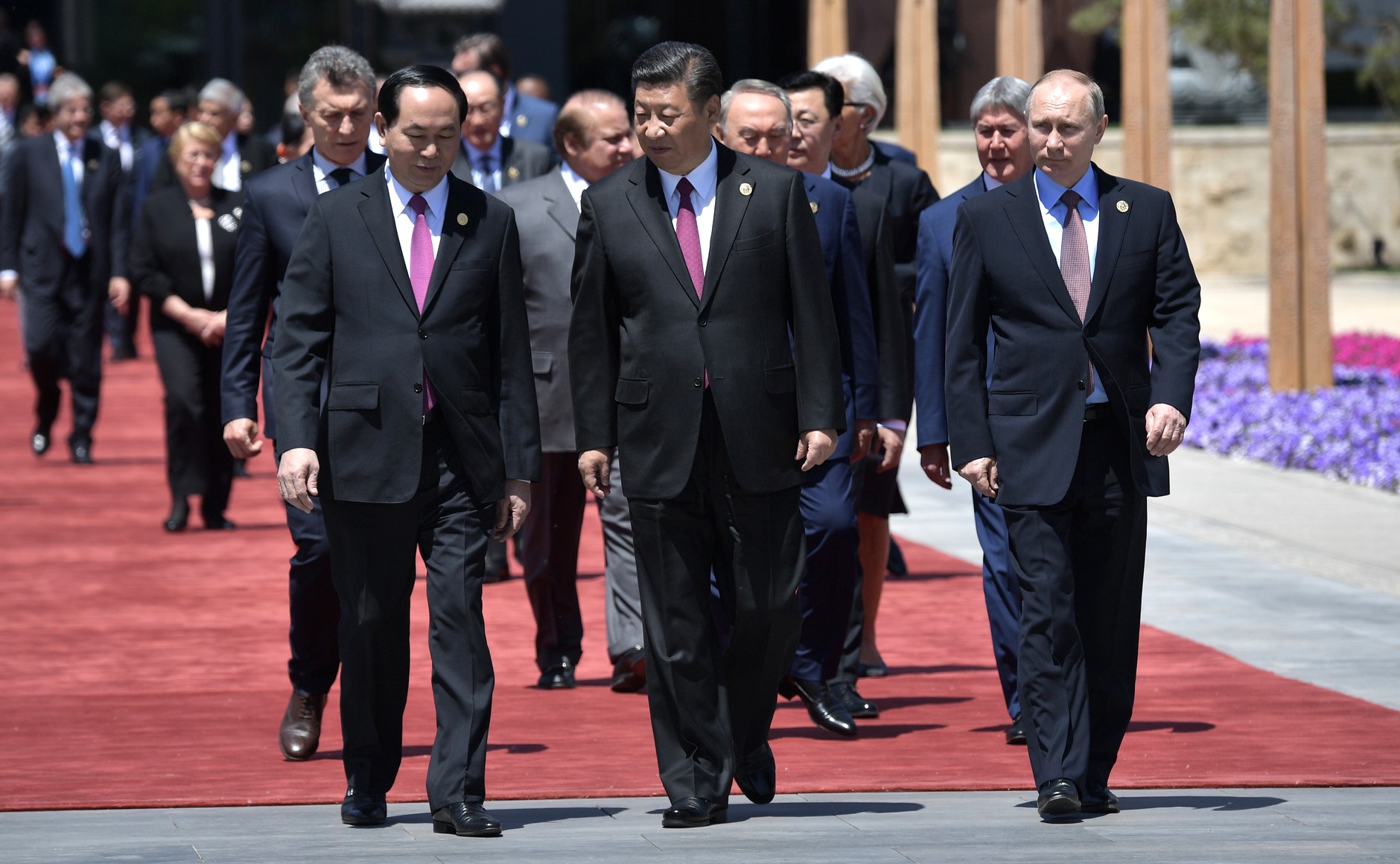 Written by Carlyle A Thayer.

In January 2017, US Secretary of State-designate Rex Tillerson sparked a media storm in China during his confirmation hearing when he responded to a question about whether he would he support a more aggressive posture toward China. Tillerson replied, “We’re going to have to send China a clear signal that, first, the island-building stops and, second, your access to those islands also is not going to be allowed.” Tillerson also called on US allies in the region “to show back up.”

China’s Global Times shot back, “Tillerson had better bone up on nuclear power strategies if he wants to force a big nuclear power to withdraw from its own territories… If Trump’s diplomatic team shapes future Sino-US ties as it is doing now, the two sides had better prepare for a military clash.” Former Australian Prime Minister Paul Keating characterised Tillerson’s remarks as “simply ludicrous” and a “threat to involve Australia in war.”

For the past two and a half years China has embarked on a master plan to back up its claims to “indisputable sovereignty” in the South China Sea by building and fortifying seven rocks and low-tide elevations in the Spratlys. China constructed three-kilometre (km) long airfields on three features and then erected two-dozen reinforced hangars adjacent to these airfields capable of housing jet fighters, bombers, electronic warfare aircraft and aerial refuelling tankers. In the most recent development, China constructed point defences on all seven of its features, including anti-aircraft guns and missile systems.

Chinese militarisation of the Spratly Islands has received widespread attention by the world’s media, regional security specialists and academic commentators. Much less attention has been paid to Vietnam’s efforts to consolidate its control over the 21 features that it occupies.

The current government in Hanoi, the Socialist Republic of Vietnam, was officially formed in 1976 after the political reunification of Vietnam. Prior to the fall of Saigon in April 1975, Vietnamese Special Forces took control of the features in the Spratlys, then occupied by the Republic of Vietnam (South Vietnam). These features have been occupied by naval infantry and a small civilian community ever since. In 1992, Vietnam installed satellite relay receivers to bring colour television to the Spratlys. In 1994, Vietnam constructed a lighthouse on West London Reef and gradually improved facilities on all its features.

Of the 21 features Vietnam occupies in the Spratlys, nine are rocks above water at high tide, and 12 are low-tide elevations on which Vietnam has built structures. Vietnam claims that it maintains 33 garrisons in the Spratlys, with some features hosting more than one garrison.

The Pentagon claims that Vietnam maintains 48 outposts in the Spratlys; this figure likely includes 15 platforms – or what Vietnam terms “technical support service structures” – in Vanguard Bank. Vietnam does not consider Vanguard Bank part of the Spratlys. The number of military personnel on Vietnam’s 21 features is not known with certainty, and estimates range from several hundred to 1,000.

In 2007, Vietnam drew up a Maritime Strategy to 2020 designed to integrate its coastal economy with the natural resources in its 200 nautical mile Exclusive Economic Zone, including fisheries and oil and gas reserves. Between 2009 and 2015, according to the US Department of Defense, Vietnam installed communications and radar equipment on 15 features and made point-defence improvements on 18.

Between 2010 and 2012, Vietnam built administrative buildings, five multi-level military structures and a lighthouse on West London Reef. Further, between 2011 and 2015, Vietnam built helipads on six outposts.

Between August 2011 and February 2015, Vietnam made significant improvements to the infrastructure on Sandy Cay by expanding the beach by 2.1 hectares (ha), reinforcing the seawalls, building piers, a harbour, and a large complex hosting a helipad, a surveillance facility, and defensive structures (trenches, protective storage, bunkers and emplacements for two 20-millimetre artillery guns).

Between 2014 and 2015, Vietnam constructed a three-story pillbox, two docks, and buildings with solar panels, communications antenna, and satellite dishes on Cornwallis South Reef. In late 2014 and early 2015, Vietnam dredged two deep channels on the south of Cornwallis South Reef to allow access to the lagoon by larger vessels that could not navigate the smaller pre-existing natural channel. Vietnam also built up small artificial islands along the new channels and began building structures. By August 2015 Vietnam had added approximately 1.6 ha of sand to the southeastern and southwestern sides of Cornwallis South and began constructing several buildings. In December 2015, Typhoon Melor washed away 0.7 ha of new land. Vietnam promptly set about repairing the damage on the southwest.

On 7 May 2015, the Center for Strategic and International Studies’ (CSIS) Asian Maritime Transparency Initiative (AMTI) reported that satellite imagery confirmed that Vietnam had added approximately 65,000 square metres [26,304 ha] of land to West Reef. A week later, Vietnam’s then Minister of National Defence, General Phung Quang Thanh, confirmed that Vietnam had reinforced embankments on some of its Spratly features to prevent erosion by wind and water.  General Thanh noted that Vietnam also built small houses that can “accommodate a few people” and that “the scope and characteristic of our work is purely civilian.”

On 14 May 2015, Vietnam’s Ambassador to the Philippines, Truong Trieu Duong, responded to media queries about the AMTI in an email writing: “Activities conducted by Vietnam… are wholly aimed at improving the old physical facilities in order to serve the minimum daily needs of the people living in islands which are under the jurisdiction of Vietnam in the Spratlys… In fact, Vietnam has several times embellished [sic] some of the islands which are under its jurisdiction, but in a very small scale, mostly constructing ridges against shoreline erosion; building a dock and wharf; (and providing) logistics for fishing services. Our construction and embellishment do not change the status quo.”

A year later, on 17 May 2016, CSIS’ AMTI reported that it had examined all 21 islets and reefs occupied by Vietnam in the Spratlys and “found evidence of reclamation at 10 of them. The images… suggest Vietnam has created just over 120 acres [48.6 hectares] of new land in the South China Sea, mostly at Spratly Island, Southwest Cay, Sin Cowe Island, and West Reef. The majority of this work has occurred in the last two years. By comparison, China has created almost 3,000 acres [1214 ha] of new land at the seven features it occupies in the Spratly Islands. Vietnam’s work has not only been much smaller, but far less environmentally destructive, as it has not involved large-scale dredging of the reefs on which Hanoi’s outposts sit. It has also mostly (but not always) involved expanding pre-existing islets rather than creating new land at submerged features.”

First, on 9 August it was reported that “in recent months” Vietnam had deployed Extended Range Artillery (EXTRA) mobile rocket launchers on five of its features in the Spratly Islands. The EXTRA system has a range of 150 km and could be used to target China’s airfields. Vietnamese spokespersons denied Vietnam had placed launchers and rockets in the Spratlys, “but reserved the right to take any such measures.”

Third, on 30 November, satellite imagery also confirmed that Vietnam had commenced dredging sand on Ladd Reef to open a new channel to provide access for fishing boats and supply vessels.

In recent years, China has defended its construction of artificial islands on the grounds that it is catching up and doing what other claimant states have done. Chinese activities, however, have dwarfed and proceeded further down the spectrum to full militarisation than any of the other claimant states.

This review of Vietnamese activities in the Spratlys demonstrates that Vietnam’s occupation of features in the Spratlys predates China’s recent construction activities by nearly four decades. Vietnam militarised its islands, to the extent that naval infantry constitutes militarisation, at the lower end of the spectrum, during the Cold War and long before the 2002 Declaration on the Conduct of Parties in the South China Sea (DOC) was adopted.

The DOC calls on all parties, including China, “to exercise self-restraint in the conduct of activities that would complicate or escalate disputes and affect peace and stability including, among others, refraining from action of inhabiting on the presently uninhabited islands, reefs, shoals, cays, and other features…”

The major exceptions are Vietnam’s extension of the runway on Spratly Island to support maritime patrol aircraft and Vietnam’s reported placement of EXTRA launchers (but not rockets) on five features in the Spratlys. This constitutes a significant step up in militarisation but does not replicate the scale of China’s activities.

The deployment of the EXTRA launchers must be viewed as Vietnam’s response to China’s construction of forward operating posts hosting runways and hangars, capable of taking virtually all military aircraft in China’s inventory, and point defence systems hosting anti-aircraft guns and missiles.

All other Vietnamese construction appears to be civilian orientated, such as reinforcing seawalls, and building piers, wharfs and enlarging navigation channels. Vietnam’s land extension activities total 4 per cent of China’s total “land reclamation.”

Vietnam’s efforts at defence self-help go hand-in-hand with political and diplomatic efforts to seek a peaceful resolution of territorial disputes and keep the South China Sea stable. For example, Vietnam responded to the most recent US Freedom of Navigation Operational Patrol by the USS Decatur in October 2016, by declaring that “Viet Nam respects other countries to exercise their rights in the East Sea as provided for by the UNCLOS, including the rights to freedom of navigation and overflight. Maritime claims and related actions of states must conform with international law, including the UNCLOS.”

Most recently, Nguyen Phu Trong, the Secretary General of the Vietnam Communist Party, visited Beijing from 12 to 15 January where he held discussions, inter alia, on the South China Sea with his counterpart, Xi Jinping. According to the joint communiqué, “Both sides agreed to continue to fully and effectively implement the Declaration on the Conduct of Parties in the East Sea (DOC) [South China Sea], work towards the early formation of a Code of Conduct of Parties in the East Sea (COC) on the basis of consensus consultation, effectively controlling disputes at sea and avoiding actions that would further complicate or expanding disputes, while maintaining peace and stability in the East Sea.”

In sum, Vietnam’s policy towards the South China Sea’s roiled waters is to engage in a robust program of defence self-help at home (Vietnam has just taken delivery of the sixth and final Kilo-class submarine), while engaging both China and the United States (as well as other major powers – Russia, India and Japan) to maintain the balance of power in the South China Sea.

Carlyle A Thayer is Emeritus Professor, The University of New South Wales at the Australian Defence Force Academy, Canberra. This article was first published on the Asia and Pacific Policy Society and can be found here.  Image credit: CC by Wikipedia Commons.