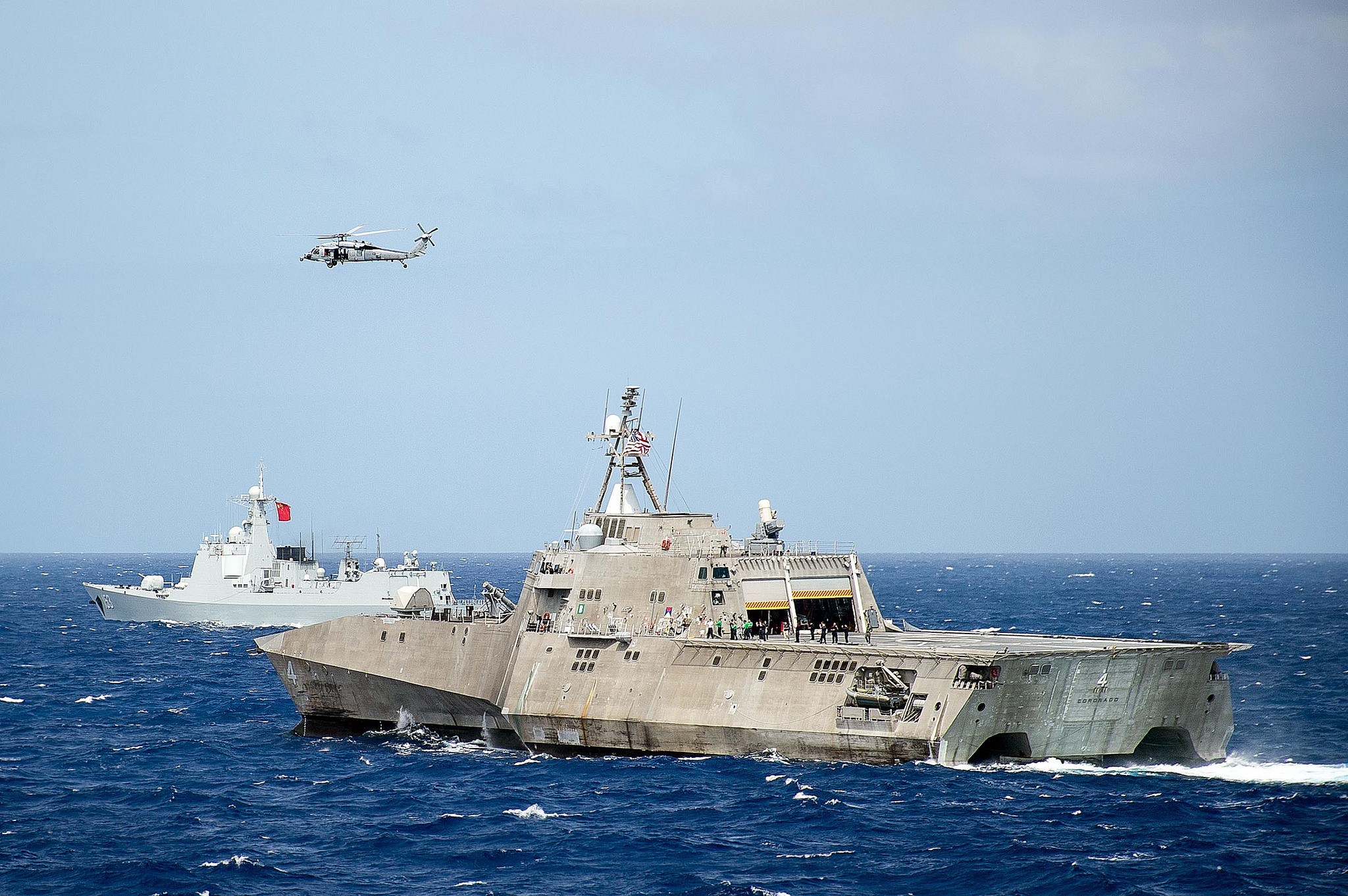 China has gone some ways to obtaining by force a mare clausum (closed sea) in the waters off Southeast Asia without meeting any real resistance to date. The July 2016 verdict of the Permanent Court of Arbitration at the Hague may have crimped Beijing’s plans but it has not weakened its resolve.

In this context “closed sea” refers to narrowing the marine trade route by creating mid-sea impediments that channelise sea-borne traffic, then controlling and commanding these sea lanes to serve China’s larger purpose of asserting its dominance in the region. But why should the “narrowing” of the South China Sea be a security concern? Firstly, more than a third of annual global trade, valued at over US $5 trillion, passes through the South China Sea. But also, as the naval historian Milan N. Vego predicts, “most naval actions in the future will most likely take place in relative proximity to the shores of the world’s continental landmass, in areas known as ‘littoral waters’, and part of a war in the littorals would take place in the waters of the enclosed and semi-enclosed seas, the popularly called ‘narrow seas’ ”.

China has never made any bones about recovering territory whether on land or at sea even when its claims are based on “historical fiction”. Controlling the South China Sea is central to its “three island chain” strategy. The first island chain encompasses almost all the islands within its ‘nine-dash’ claim line. Having a stranglehold over it, Beijing hopes, will help the PLA Navy consolidate its presence in the second island chain stretching from Papua New Guinea to Japan and into the western Pacific. This then acts as a prelude to extending Chinese military reach and influence to the third island chain, Guam and the Hawaiian islands.

More immediately, however, China is concerned with protecting the waterway that carries the bulk of its seaborne trade. With the Subic Bay naval base located only 120 miles west of the Huangyan Islands (aka Scarborough Shoal), which China forcibly occupied leading Manila in 2013 to approach the Hague Court, Beijing apparently fears that the 2012 Enhanced Defense Cooperation Agreement permitting the US armed forces to stage out of five principal bases and facilities in the Philippines, will imperil its trade and, importantly, by preventing its domination of the South China Sea, nullify its grand plans for maritime supremacy in Asia.

Ever proactive and, perhaps, anticipating a negative judgement, China created a series of fortified island outposts and “artificial islands” for military use. Cement was poured on coral reefs and on extended rocky protuberances with little regard for environmental damage, and the ground leveled on existing islands in its possession at a furious pace until Beijing had a number of nearly self-sufficient military platforms.

Equipped with lighthouses, helipads that can also serve as airstrips, and solar arrays to generate electricity, China placed not only high-frequency surveillance radars on these islands to monitor surface and air traffic in the extended area, but also guns and HQ-9 surface-to-air missiles. By June, the PLA revealed that as part of its A2/AD (anti-access/area denial) strategy, it had deployed from the mainland its DF-21D anti-ship ballistic missile systems and H-6K bombers to patrol the contested area. All this happened before the court issued its decree.

The Tribunal rejected outright China’s expansive claims in the South China Sea and its equally ambitious notions of exclusive economic zones, declaring unambiguously that it had no jurisdiction whatsoever on resources found within this maritime sphere.

However, each of the artificial islands or “land reclamations” on the seven features in the Spratly Islands group are nevertheless endowed, the Court ruled, with an exclusion zone bounded by a 12 nautical mile territorial sea. These newly constructed military facilities have thus been accorded legitimacy. Beijing has followed up by erecting reinforced hangars for combat aircraft, such as the JH-7A for maritime strikes, on Fiery Cross, Mischief, and Subi Reefs. It will enable Chinese naval aviation to mount longer, more frequent and dissuasive sorties by fighter-bomber aircraft.

Now consider the grouping of the Chinese bases on “reclaimed” land. Besides the Cuarteron Reef near Malaysia, which hosts a high-powered 300km-range radar to watch over the Malacca Strait opening to the South China Sea, most of the other built-up bases are bunched at the near centre-point of the nine dash claim linecurving short of and around the southern Vietnamese, south-central Kalimantan (Indonesia), Sarawak and Sabah (Malaysia) coasts, Brunei, and the southern Philippine islands.

This virtual mid-South China Sea grouping of the island-facilities to house naval and air assets has divided the South China Sea into two narrower seas on either side of the claim line for maritime traffic to negotiate. This will enable China to better police the two channels from the central verge, as it were.

Establishing an instantly available military force, and removing to an extent logistic constraints for first contact operations has, moreover, afforded Beijing an unrivalled capacity to influence politics in the countries on the littoral and offshore. It allows China to dictate terms to its maritime neighbors on numerous issues, tilt conflict or dispute resolution to its advantage, influence trading nations using the now bifurcated oceanic highway, and with the threat of applying the tourniquet to one or both sets of sea lanes, indirectly command a good part of global trade and, generally, dictate the nature of maritime interaction.

And what of the US in all this? While Washington’s rhetoric concerns an armed US presence to ensure a peacefully rising China and a stable Asia, in practical terms the US seeks to avoid conflict. The USS Ronald Reagan carrier strike group and the flotilla of three missile destroyers (Spruance, Stethem, and Momsen) were pulling freedom of navigation patrols (FONOPs) in the South China Sea to “show resolve” around the time the verdict was issued. The US warships, however, took great care when “stalking” these Chinese land reclamations to not violate the territorial sea surrounding them.

Such caution was in line with the White House’s admonishment of confrontation-minded US military leaders. In March 2016, General Joe Dunford, Chairman of the Joint Chiefs of Staff, described Chinese activity in the South China Sea as “destabilising” and as posing a danger to commercial trade in a speech at the Center for Strategic and International Studies. A few weeks later, the head of the US Pacific Command, Admiral Harry Harris, talked of the need to aggressively counter China’s “great wall of sand”.

Rattled by the fighting words, then National Security Adviser Susan Rice gagged them. The Obama Administration, however, justified silencing Messrs Dunford and Harris in terms of preserving “maximum political maneuvering space” for itself in talks with the Chinese leadership.

Admiral John Richardson, the US Chief of Naval Operations, defined this policy of peaceful outreach to Beijing saying, “Cooperation would be great, competition is fine. Conflict is the thing that we really want to avoid.”

An American policy that strains to eliminate the possibility of tension or friction in relations with China is a troubling development for the majority of Asian states. Since the Cold War era Asian nations have been reassured by the US military presence, seeing it as guarantor of their security. An erosion of confidence in America’s will to use force to protect its friends could have far-reaching consequences.

The problem of a weak military commitment is evident beyond the South China Sea. Interested in buttressing his “Prague legacy” Obama is reportedly considering a nuclear ‘No First Use’ policy that Asian allies are desperately lobbying against. This, together with the Republican Party presidential candidate Donald J. Trump urging Japan and South Korea to acquire nuclear weapons for self-protection because the US can no longer afford to provide security to them, have the makings of a full-blown security crisis.

But it is precisely Washington’s disinclination to forcefully contest strategic spaces that China will exploit both to show up the US as an unreliable ally and intimidate Asian states into becoming more amenable. China lost no time after the 11 July verdict, for instance, in conducting a live-fire naval drill and imposing an air defense identification zone in order to test the US response. Washington did not run the gauntlet.

The US unwillingness to stand up to China may convince Asian states to do something themselves, as Beijing has indicated it will ignore the Hague ruling.

But what can Asian states do if the US sits this crisis out? Merely resolving not to be “bullied” will not help. Continuing with the frequent sailings of warships by the periphery powers – the US, India, Japan, and Australia – even if these are not prosecuted as FONOPs, as well as surveillance flights by P-3s out of the Clark AFB in the Philippines and the northern Australian coast, will not hugely discomfit the Chinese military as it has already become familiar with this kind of activity.

A more potent solution that will “reverse China’s strategic gains” is to counter-narrow the same waters for China, meaning, to potentially restrict the freedom of movement of PLA Navy ships and the merchant marine in a like manner to what China has already done. This can be achieved by arming ASEAN members who show the stomach for a fight with China, such as Vietnam, with strategic impact armaments.

India, for one, has finally appreciated the strategic gains from arming Vietnam with the Brahmos supersonic cruise missile. New Delhi has agreed to export it to Hanoi, which is likely to deploy it onboard its corvettes affording Vietnam a mobile offensive capability. The air-launchedand submarine-fired Brahmos variants that may follow will give Vietnam enormous operational flexibility and will compel China to alter its plans for the use of force, principally because of the unbearable “exchange ratio” that Beijing faces with the Brahmos. Pitting a cruise missile costing US$10 million against a missile destroyer costing, say, US$600 million-US$800 million will inhibit Chinese fleet commanders from casually courting risk and combatant ship captains from undertaking provocative missions.

In this scenario, China will discover that the artificial island bases it has created can stockpile only so much fuel and war materiel, and the relatively long distance from the mainland to the disputed area can become a military liability when it comes to sustaining naval or air action. After all, the distance between the nearest Philippine island and Scarborough Shoal is one-fifth the distance from the Shoal to the Chinese coast.

Further, Vietnam’s success in keeping at bay both the secret Chinese “fourth fleet”, supposedly meant for Indian Ocean forays (which serves India’s security interests), and the powerful South Sea Fleet co-located at the Sanya naval base on Hainan Island will have a domino effect. In fact, anticipating the deterrence potential of the Brahmos, Thailand, the Philippines, Indonesia, and Malaysia have already shown interest in it.

With the disputant states and other countries on the Southeast Asian littoral bristling with one shot-one ship kill weapons, which they will now procure from wherever they can as a cost-effective solution, the South China Sea will be effectively narrowed and rendered equally dangerous for the Chinese navy and merchantmen. It will make for a military equilibrium and durable peace in the region, lengthen the fuse for the US, India, Australia, and Japan, and increase their policy options.

Bharat Karnad is Research Professor for National Security Studies at the Centre for Policy Research, New Delhi. This article was first published on the Asia and Pacific Policy Society and can be found here. Image credit: CC by U.S. Navy/Flickr.