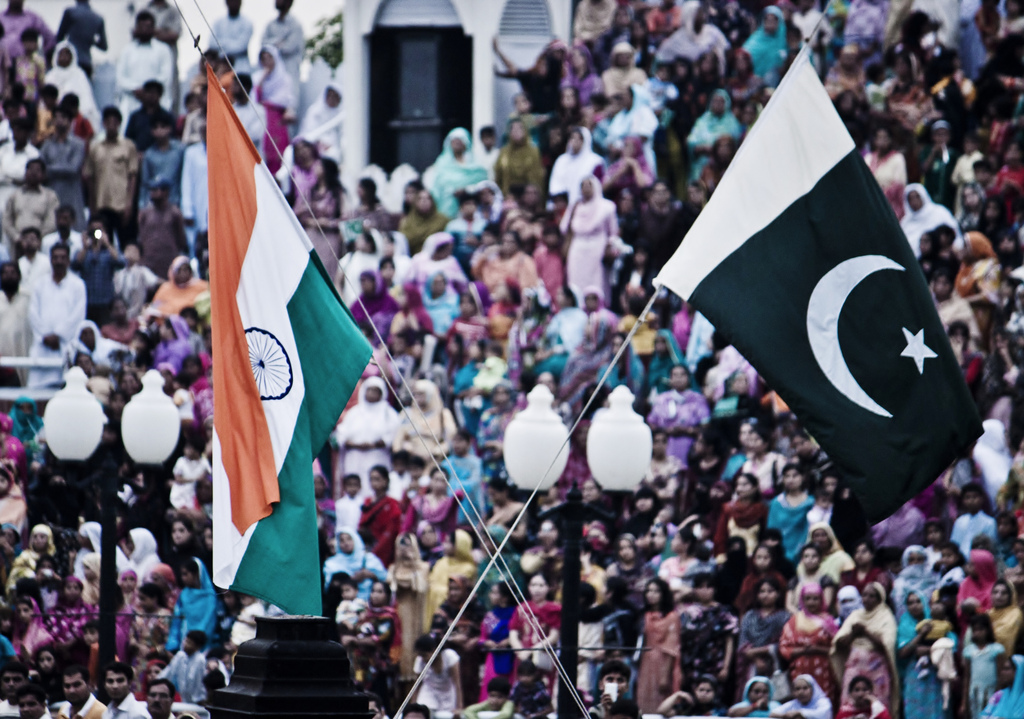 The Doklam standoff between June and August 2017 has drawn international attention to Sino-Indian relations. While the confrontation was resolved peacefully, relations have sunk to their lowest level since the late 1960s. An added concern is that the India-China-Pakistan strategic triangle has once again come to the fore. In the wake of Doklam, both the chiefs of the Indian army and air force have publicly spoken of the country’s preparations for a two-front war with China and Pakistan.

The India-China-Pakistan triangle is one of the most volatile and dangerous strategic formations. The three powers account for nearly half the world’s population. They are respectively the second, first, and sixth largest countries in population terms. Regarding active personnel in the armed forces, they are the third, first, and sixth largest in the world. Between them, they have roughly 500 nuclear weapons, with China owning about half the number. India and Pakistan have fought four wars and managed several crises, while India and China have fought one war and had several smaller confrontations including most recently in Doklam in June-August 2017.

The general view is that China and Pakistan have been constant allies against India. In fact, the triangle has gone through phases, with China tilting one way and another. Thus, from 1949 to 1958, India and China were friends, and both were suspicious of Pakistan because of its US alliance commitments. From 1959 to 1989 was the golden period of China-Pakistan relations, with the two powers in tacit alliance against India. With the end of the Cold War, China moved to a more neutralist stance between India and Pakistan. Since 2015, China has tilted once again more decisively towards Pakistan.

Between 1949 and 1958, China and India were close partly because both were wary of the United States and troubled by the possibility of instability around them in Asia. Both were close to the Soviet Union. China, despite differences with Moscow, was part of the communist alliance against the US-led alliance system. India was non-aligned but admired the Soviets for their economic progress and considered Western imperialism the bigger threat. Not surprisingly, both China and India looked at Pakistan with suspicion over its ties to the US. Both also regarded Pakistan’s Islamic foundational principles as going against their own secular orientation.

With the sharpening of the border quarrel between India and China from 1954 onwards – but especially after the Dalai Lama fled to India in 1959 – Beijing and New Delhi drifted apart and eventually into war in 1962. China and Pakistan meanwhile moved closer together, the relationship cemented by the 1963 agreement resolving their territorial differences. From 1959 to 1989, they were tacit allies – tacit because they did not have a formal agreement to come to each other’s defence. In Delhi’s view, however, China and Pakistan functioned like allies – even if, in the end, China did not intervene in either the 1965 or 1971 India-Pakistan wars.

While the two certainly had a united front against India – Pakistan got diplomatic support and arms supplies from its partner – China’s motives were complex. Beijing wanted to pry Islamabad loose from too close a relationship with Washington. This was partly because of Pakistan’s location contiguous to Xinjiang and Tibet which made it an ideal listening post and a potential base for the Americans. Pakistan was also a valuable middleman to the Muslim world, particularly in the Gulf and the Middle East.

There is evidence too that while China provided Pakistan with diplomatic and military aid (including nuclear and missile assistance), the relationship was not all one way. Islamabad repaid its debts by serving as the go-between in the US-China rapprochement of 1971-72. Materially, it provided China with the centrifuge technology its nuclear scientist, A.Q. Khan had stolen from his erstwhile Dutch employers. It also gave Chinese technicians access to its US military equipment to help them reverse engineer various systems. In addition, from 1979 to 1989, Pakistan worked with the US and China to prosecute the insurgent war against the Soviets in Afghanistan. Finally, China stayed close to Pakistan to ensure that Islamabad had an incentive to curb Uighur separatists operating from its territory or supported by Pakistani militant groups.

After the Cold War, China adopted a more neutralist stance towards India and Pakistan – neutralist because though it remained close to Pakistan it tilted towards India on the Kashmir dispute. India-China relations had improved steadily after the Rajiv Gandhi-Deng Xiaoping meeting of 1988. At the meeting, India agreed to normalize its interactions with China as a way of creating the conditions for a border settlement. This reversed New Delhi’s longstanding insistence that a border settlement was a precondition for normalization.

This Indian change of heart led the two sides to resume border negotiations as well as trade and people to people ties. In 2005, India and China signed an agreement on the basic principles upon which a border settlement should be constructed. Trade grew dramatically from $1.8 billion in 1997 to $72 billion dollars in 2014. Beijing’s posture on Kashmir had begun to change in the 1980s as the Cold War wound down, but during the 1990s it took its most neutral position in the dispute. In 1999, when India and Pakistan fought a war in Kargil, China tilted towards India, urging Pakistan to seek a peaceful settlement of Kashmir.

A key reason for China’s more neutral position in the subcontinent was its desire to limit US influence in India. After its initial condemnation of India’s nuclear tests in 1998, Washington was trying to repair relations with Delhi. To slow the emerging Indo-US entente, Beijing adopted a more even-handed approach in South Asia. In addition, China’s trade ties with India had grown substantially. An economically rising India, growing at roughly 7 percent annually, was an attractive market for Chinese goods, far more so than Pakistan. Finally, Pakistan’s support of radical Islamic groups in Afghanistan and Pakistan were worrying. While Beijing could not abandon Islamabad, engaging Delhi was intended to increase the pressures on Islamabad to rein in Islamic extremists.

China tilts back to Pakistan, 2015 onwards

By April 2015, when Xi went to Pakistan, Beijing had returned to its tilt towards Islamabad. This was almost certainly due to the more assertive China policy of the new Indian prime minister, Narendra Modi, who came to office in May 2014. While the initial weeks of India-China relations after Modi’s arrival in Delhi were cordial, the new prime minister quickly set about constructing an anti-China coalition with the US, Japan, Australia, and Vietnam.

In a burst of activity between August 2014 and December 2014, Modi made trips to each of these countries. In January 2015, President Barack Obama was the guest of honour at India’s Republic Day parade – the first US president to attend the ceremony. During the visit, he signed a vision statement on India-US cooperation in the Asia-Pacific and the Indian Ocean. With all four countries, Modi emphasized military and defence ties and India’s worries over China – in particular, Chinese activities in the disputed seas of Northeast and Southeast Asia. He also adopted an obstreperous attitude to bilateral ties with Beijing arguing that progress towards a border settlement was vital for normalization and not the other way around.

Whether in direct response or not, China unveiled a massive infrastructure investment plan for Pakistan, amounting to commitments of $64 billion. The China Pakistan Economic Corridor (CPEC) was assimilated into Beijing’s even more ambitious Belt and Route Initiative. When Delhi objected that the connectivity between China and Pakistan would traverse contested areas of Pakistan-backed Kashmir, Beijing largely ignored the objection. Relations continued to deteriorate. India refused to join the BRI, even after China offered to rebrand the CPEC. Beijing, in turn, opposed India’s Nuclear Suppliers Group membership as well as UN moves directed against Masood Azhar, the leader of the Jaish e Mohammed, a Pakistani-based militant group held responsible for terror attacks in India. When India in the company of the US sharpened its anti-terror diplomatic campaign against Pakistan, Beijing came to Islamabad’s defence, arguing in October 2017 that Islamabad was leading the fight against terror.

The deterioration of India-China relations since 2014 and the strengthening of China-Pakistan relations have put India in a difficult strategic spot. Under Modi, India-Pakistan relations have taken a dive as well: all dialogue and interactions have been terminated, and Delhi is preoccupied with painting Islamabad as a terrorist state. The dynamics of the India-China-Pakistan triangle are being affected by two other powers – the US and Russia. While the US increasingly sides with India, Russia has thrown in its lot with China and is developing ties with Pakistan. Delhi seems to be hoping that a partnership with Washington will balance the China-Pakistan entente. However, Delhi is acutely aware that under Trump the US could be a fickle partner. Delhi has to find a way to engage Beijing without losing face if it wants to rebalance the triangle.

Dr Kanti Bajpai is Director of the Centre on Asia and Globalisation and Wilmar Professor of Asian Studies at Lee Kuan Yew School of Public Policy. His areas of interest include international security, Indian foreign policy and national security. He is currently working on a book on India-China relations. Image credit: CC by Jack Zalium/Flickr.

Prospects for an invigorated EU-ASEAN partnership
CPEC: An Economic Panacea for Pakistan?