The Struggle for Gender Equality in Xi’s ‘New Era’ 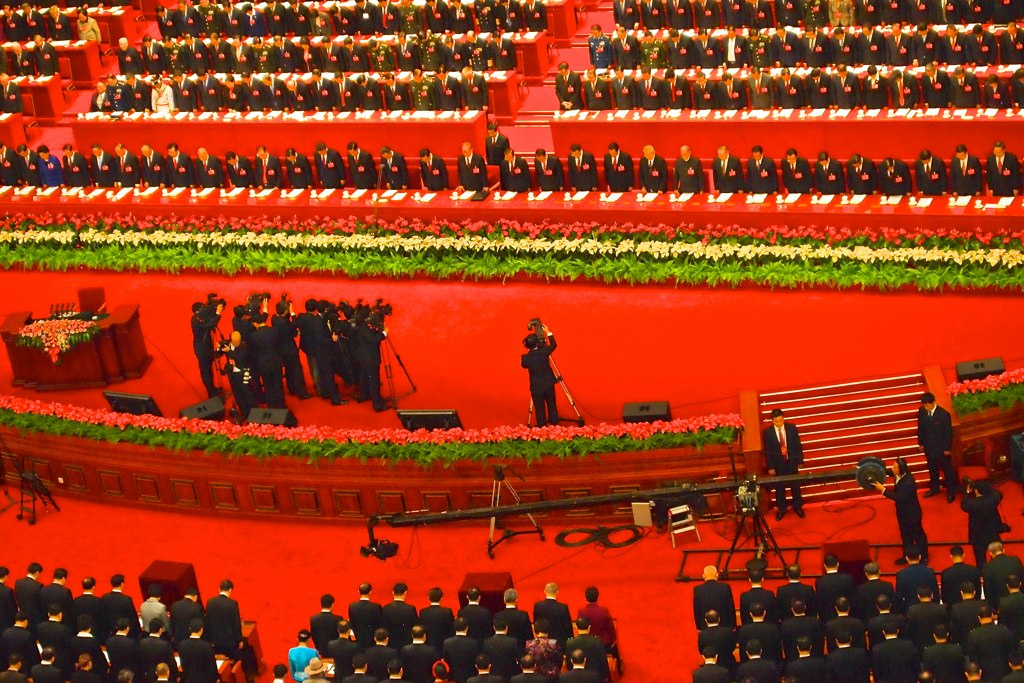 President Xi Jinping kicked off China’s twice-a-decade leadership re-shuffle last week with a marathon speech session in which he announced to a sea of men in black suits being served tea by women that Socialism with Chinese characteristics had entered ‘a new era’.

With much speculation on what changes this ‘new era’ might bring for policy direction and party leadership over the course of Xi’s next five years, at least one thing looks like a safe bet – the Politburo Standing Committee, China’s most powerful political body, will remain a boys’ club.

The Politburo Standing Committee has been an all-male affair since the Communist Party came to power in 1949. While President Xi has become increasingly proficient in the art of publically paying lip service to issues of gender equality, the dominance of Han men in positions of political power alongside the dearth of female representation reflects a serious problem at the heart of Chinese politics more broadly.

While Chairman Mao once famously proclaimed that “women hold up half the sky,” promoting women’s participation in the public realm often had more to do with increasing labour force numbers for the sake of economic development than gender equality per se.

As part of the mass mobilizations during the Mao era, women revolutionaries within the party worked hard to transform the patriarchal culture that pervaded party-state bureaucracy by promoting gender equality policies and women’s political participation. Often facing fierce resistance from male-dominated leadership, the All-China Women’s Federation (ACWF), China’s official mass organisation for women, played a crucial role in carving out various in-roads into politics for women at local and national levels. Though the number of women who made it to the highest levels of party and state leadership were still low, the 1970s is often referred to as China’s “golden age” of women’s political participation.

The introduction of market reforms in 1978 and the gendered effects of economic restructuring that followed undermined many of the gains made for women’s political participation during the socialist era. As the party-state shifted its focus from social equality to the pursuit of economic modernisation, the number of women at all levels of party and government began to stagnate and decline.

Today, women make up less than 30% of the total membership of the Communist Party of China (CPC). While state media boasted of the addition of a few extra female delegates to this year’s Party Congress as an example of China’s “great efforts in recent years to promote gender equality and protect women’s rights and interests,” this still only amounts to 24.1% of the total number of representatives in an organisation with limited political power to begin with. Indeed, as in most countries, the higher up the echelons of power you look, the fewer women you see. Not since 1977 have women made up more than 10% of the Central Committee, while of the expanded politburo, made up of 25 members in total, there are only two women. Of China’s State Council, the highest executive organ of state power, there is only one female minister, while of all China’s 31 provincial governments, not a single one is headed by a woman. It is almost unimaginable to think of a woman becoming general secretary of the CPC and president of the PRC any time soon.

There are plenty of institutionalised factors that continue to hinder women’s participation in politics, most of which are not unique to China. The country’s national retirement age is fifty-five for women, while it is sixty for men. As well as leading to reduced pensions and fewer social security benefits, this mandatory retirement age also means missed career development and fewer advancement opportunities for women, often just as many careers are starting to peak. Relatively low levels of female membership in the CPC and poor female political representation at local and provincial levels further hamper gender parity at higher levels of Chinese politics. More generally, often juggling the double burden of careers and domestic work, as well as navigating other patriarchal biases and practices across social and political culture, women often lack the necessary time and/or social capital to compete with their male counterparts for political positions. The party-state’s persistent campaign over the past few years to push women back into the domestic sphere to take care of their families further hurts female participation in politics.

Women’s participation in public policy-making and governance is crucial for achieving gender equality. So what kinds of initiatives might work towards transforming gender relations in Chinese politics from local to national levels? Might the answer lie in affirmative action policies and gender quotas that would ensure more equal representation and participation of women at all levels of politics across the country?

Indeed, gender quotas have been an effective way in achieving numerical parity between men and women in many countries. China itself has variously experimented with gender quotas, and was even one of the earliest countries to implement them as far back as the 1920s and 1930s. More recently, while the Organic Law on Villagers Committees and the Law on the Protection of Women’s Rights maintains that committees “shall include an appropriate number of women”, this often lacks sufficient impact to influence local practice and reflects the ambiguous nature of China’s gender quota systems(s) as well as a lack of political will.

Moreover, the relationship between gender quotes and female empowerment is not always so clear-cut. Many have argued that women’s participation should not simply be about numerical representation, but also about how far this participation can go in affecting meaningful policy change and improving the lives of all women and girls. While gender quotas undoubtedly matter a great deal, it is also important to be critical about the limits of a liberal approach centring on the inclusion of women into a game that is already structured in favour of patriarchal (among other) interests. Promoting gender equality and the integration of all women in politics must strive to go further than the “just add women and stir” approach towards a feminist project of meaningful political empowerment and engagement across gender, class, ethnicity, and so on.

Considering his record over his last five years in office, few if any would expect to policies of this kind taking place in Xi’s ‘new era’. The arrest and detention of feminist activists on the eve of International Women’s Day in 2015 for distributing anti-sexual harassment stickers on public transport, increased state surveillance of feminist activists and crackdowns on their online work, and even travel restrictions are just a handful of examples of how those who have attempted to tackle issues of gender inequality have fared under Xi. In the run-up to this Party congress, Chinese state media’s decision to publish a piece downplaying the seriousness of the country’s sexual harassment problem is further testimony to the State’s continued marginalisation of women in China today.

Meaningful structural change requires more than a passing mention, as Xi made in his lengthy keynote, to “adhering to basic state policy on gender equality”. Taking measures to improve women’s positioning within China’s local, national and elite politics will require a major cultural shift as well as the political will power to support and facilitate it. Beyond the modest proposal of improving all women’s numerical standing within the party, it would also involve a rethink of the market-based Han masculinist assumptions that underlie politics and society at large. As long as Xi’s primary concern remains the survival and resilience of the CPC through an ever-tightening grip on socio-political order across the country, the likelihood of the party accommodating feminist interests that would frankly shatter it to its patriarchal core looks more unlikely than ever before.

Séagh Kehoe is a PhD candidate at the School of Politics and International Relations, University of Nottingham. They are co-founder and editor of WAGIC.org, and a PhD Associate at the China Policy Institute. They tweet @seaghkehoe and @halfthesky49, and blog at www.seaghkehoe.com. Image Credit: CC by Remko Tanis/Flickr.