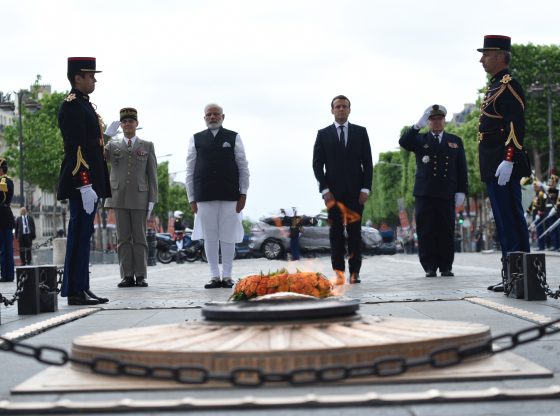 One of the interesting features of Japan’s latest plan to revive the Indo-Pacific quadrilateral dialogue is the move to associate the European powers with it. Speaking to the Nikkei Asian Review last week, the Japanese foreign minister, Taro Kano, said that early next month he would present a formal proposal to convene a high-level dialogue between the officials of Japan, India, Australia and the United States. Exploratory talks on the Japanese initiative are likely to take place between the officials of the four countries on the margin of the East Asia Summit next month in The Philippines.

Kano added that consultations are also on with France and Britain to associate them with the quad. This is not surprising. For Shinzo Abe, who first discussed the idea of a quad a little over a decade ago, the four-nation forum is, in essence, a coalition of “maritime democracies”. Abe argued that the maritime democracies have a stake in securing a rules-based global order, liberal trading system and freedom of navigation.

Both France and Britain have military presence and security arrangements in the Indian Ocean. France has many military facilities in the Indo-Pacific, including those in Reunion, Djibouti and the United Arab Emirates. Britain continues to control Diego Garcia. It also leads the Five Power Defence Arrangement (involving Singapore, Malaysia, Australia and New Zealand) set up in 1971. France has a variety of coordination mechanisms in the Pacific with the United States, Japan, Australia and New Zealand.

As a realist Abe is conscious of the fact that the growing power imbalance in Asia amidst the rapid rise of China can’t be addressed by America’s Asian alliance system alone. Abe has consciously courted special relationships with India, Australia and other regional powers. He also sees the need to keep the quad an open-ended organisation that can also benefit from the partnership with European powers.

That France and Britain are democracies with maritime traditions which shaped the contemporary Indo-Pacific makes them natural candidates for working with the quad. Thanks to the colonial inheritance, they have huge networks of political and military influence in the region. The European powers, especially France, have many overseas territories in the Indo-Pacific.

The British-led Commonwealth has many small island states scattered all across the Indo-Pacific. The term Indo-Pacific is only a new name for the vast sphere of influence — from Aden to Malacca and from South Africa to Hong Kong and Australia — that Great Britain presided over from the early 19th to the mid-20th century. This sphere of influence was, of course, built on the foundation of men and material resources provided by the Subcontinent.

Both France and Britain have military presence and security arrangements in the Indian Ocean. France has many military facilities in the Indo-Pacific, including those in Reunion, Djibouti and the United Arab Emirates. Britain continues to control Diego Garcia. It also leads the Five Power Defence Arrangement (involving Singapore, Malaysia, Australia and New Zealand) set up in 1971. France has a variety of coordination mechanisms in the Pacific with the United States, Japan, Australia and New Zealand.

The Indo-Pacific is also a major market for the European arms industry. While the Middle-East has always been a major destination for European arms sales, China’s military modernisation, and the response from its neighbours, has heated up the Asian arms bazaar. There is a rush to build or modernise the submarine arm of most Asian navies, and the European powers are major contenders.

After the Cold War came to an end, both Paris and London seemed preoccupied with the geopolitics of Europe and its immediate neighbourhood in Eurasia and the Middle East. As Asia and the Indo-Pacific emerged as the world’s most important strategic theatres, France and Britain began to pay greater attention.

After the US announced its pivot to Asia at the beginning of this decade, France and Britain signalled that they will no longer neglect the Indo-Pacific. Both countries stepped up their maritime activity in the Indo-Pacific. Germany, which did not succeed in establishing substantive presence during the colonial era, has also begun to focus on the Indian Ocean.

As one of the world’s top trading nations, Germany, of course, has a special interest in keeping the sea lines of communication in the Indo-Pacific. That is true of Europe as well. More than 70 per cent of its trade passes through the Indo-Pacific. As a collective, the European Union has also begun to take an active interest in the security affairs of the Indian Ocean.

Whether France, Britain and other European states associate themselves with the quad or not, India already has a strong bilateral security engagement with countries like France and Britain. Issues relating to maritime security have been at the top of the growing partnerships with the European nations. India’s maritime dialogue with France has begun to advance in the last couple of years.

Last week, during the visit of French defence minister, Florence Parly, the two sides decided to expand information sharing and explore operational cooperation between the two navies. As Delhi scrambles to cope with China’s rapid naval advances in the Indian Ocean and deploys its ships far from the Indian shores, it needs to bring together its bilateral cooperation with individual European countries into a comprehensive strategic framework.

To be more effective in the vast littoral, India needs to intensify the exchange of maritime intelligence, negotiate agreements to share naval infrastructure facilities in the littoral and put in place logistical support arrangements with its European partners. Japan’s plans to bring France and Britain on board the quad can only reinforce India’s maritime partnerships with Europe.

C. Raja Mohan is the director of Carnegie India. This article was republished with the authors permission and was first published on The Indian Express. Image credit: by Ministry of External Affairs/Flickr.