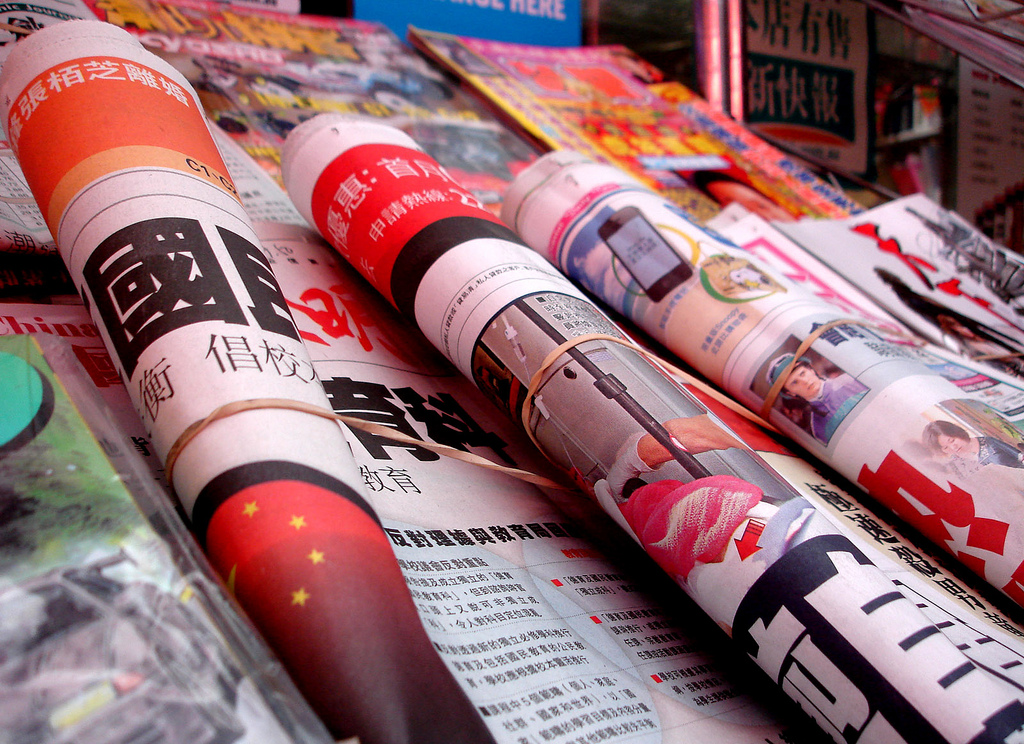 Now that Xi Jinping has been newly inaugurated to his second term as General Secretary of the Chinese Communist Party (CCP) with a strengthened position, his thoughts will inevitably turn to expanding the CCP’s position of power and influence in Chinese public life. One of the main tools in this endeavour is ever-tightening Party/state control over the Chinese media.

Of course, Chinese media censorship is hardly new, but Xi and his supporters have made clear that the CCP’s relative loosening of media control over the course of the reform era must be halted and reversed. From declaring that (in loose translation) “Party must be the media’s middle name” to insisting that all Chinese media must “raise high the banner of Marxism-Leninism,” Xi has strengthened Chinese Party/state censorship in a manner not seen in decades. Unfortunately for Xi and China, however, increased media censorship is likely to backfire in the long run, leading to further weakening of central government control and a long-term increase in the very corruption that Xi is attempting to eliminate.

Chinese media censorship is not an end in and of itself. Instead, Xi and his elite CCP supporters see media control as part of a larger project that aims to centralize and control all aspects of Chinese political and economic life. From tightening control over businesses – both state-owned and private – to cracking down on wayward lawyers and non-profit organizations, the top Chinese leadership has been engaged in an unprecedented re-centralization of political power. As Xi declared during the recently concluded 19th Party Congress, “We must … rid ourselves of any virus that erodes the party’s health”. Xi, it is said, wishes to be “Chairman of everything.”

But there is an inherent contradiction at the heart of this approach. For CCP power to reign supreme inside every organization in China, the Party elite in Beijing must have accurate information about local compliance – or lack thereof – to central Party/state demands. Such information can come from only three sources: the CCP’s own internal corruption monitoring system (known as the Commissions for Discipline Inspection (纪委)), the general population (through the Letters and Visits petition system (信访制度) or in online complaints) and the mass media. Analyzing the first two areas is outside the scope of this post, but there is evidence that the Commissions for Discipline Inspections themselves have problems enforcing “Party discipline”, and the Party/state has effectively narrowed the opportunities for the general public to complain about official misconduct (even online). This leaves the media as perhaps the crucial avenue that allows the central Party/state to effectively fight corruption.

Xi, however, clearly wants more control over the media at the same time he and his supporters need the media’s accurate information to help control misconduct inside the party. But how does a leader increase media control and increase domination over the Party/state itself? Increased control over the media can be achieved in three (not mutually exclusive) ways: 1) increased formal monitoring of media outlets and journalists, perhaps coupled with financial rewards for compliant media workers 2) building a greater ideological commitment to Xi and the CCP among Chinese media workers, so that they act in the best interests of the Party/state, and 3) increasing the climate of fear and uncertainty among journalists themselves to promote self-censorship.

The first solution, increased monitoring of news workers, would be relatively expensive and would rely on increasing the size of the (currently quite small) Central Propaganda Department (CPD) and other media monitoring organs. Alternatively, the CCP can continue to outsource most censorship to the media outlets themselves in a continuation of current practice. However, in a time of declining media revenues – especially among China’s newspapers – this solution will probably not be adopted enthusiastically and will, in any case, rely on consistent pressure from the Party/state censorship bureaucracy. This solution will also likely result in reduced information flows about lower-level official mismanagement. The second solution, attempting to increase the loyalty and ideological commitment of Chinese news workers, is unlikely to work terribly well. Despite ongoing CCP efforts to control the content of journalism education and insist that media outlets be guided by “Marxism-Leninism and Mao Zedong Thought,” there is little evidence that journalists take this approach any more seriously than do most members of the Chinese public. In essence, few ordinary citizens (or even officials) believe in official CCP doctrine, and the level of belief among well-informed journalists might be even lower.

But the third solution – increasing the climate of fear and uncertainty to further promote self-censorship – is indeed likely to be effective at controlling media content. Most censorship in China is already self-censorship, a result encouraged by a deliberately constructed climate of uncertainty among media outlets about where the boundaries of acceptable coverage lie. Because media workers generally do not know if even a mildly sensitive article will pass unnoticed or lead to severe punishments, all but the bravest journalists keep well back from any potential red lines. Xi’s policies seem to have increased this dynamic, and more Chinese journalists – and even foreign correspondents – seem unwilling to even approach sensitive reporting topics. We should expect the CCP to continue to expand this approach of “control through uncertainty” since it is both efficacious and cost-effective.

In combination, these three solutions are likely to be effective in creating a more supine Chinese press. In the short run, this outcome will be seen as a victory for Xi Jinping and his centralizing desires. In the long run, though, an ever-tightening control over the press is likely to encourage the very kinds of corruption that Xi wishes to stamp out. By depriving the central state of one of its most crucial sources of information about local-level mismanagement and corruption, the ongoing media crackdown will likely only make these problems worse in the end. There is evidence that Xi’s ongoing anti-corruption campaign has worked in the short run, but by reducing the power of institutionalized monitoring, Xi is laying the seeds of a resurgent corruption when the pressure is removed. Recent research by media expert Jiangnan Zhu, for example, has found evidence “that while campaign-style enforcement can reinforce the central authority and magnify support for individual leaders, it may also marginalize the role of legal institutions crucial to long-term corruption control.” Because an emboldened media serves as an effective anti-corruption institution – and perhaps even the most effective one of all – increasing efforts to reign in the press is likely to be penny wise and pound foolish. They may increase Xi’s power in the short run, but an ever-larger bill will eventually come due.

Dr Jonathan Hassid is an Assistant Professor of Political Science at Iowa University. His research interests mainly revolve around the politics of the Chinese news media and ways to measure symbolic power around the world. Image credit: CC by Aardvark Ethel/Flickr.

Taiwan, China, and the future of U.S. policy in Asia
The long read | APEC: Underwriting Trade in an Age of Uncertainty