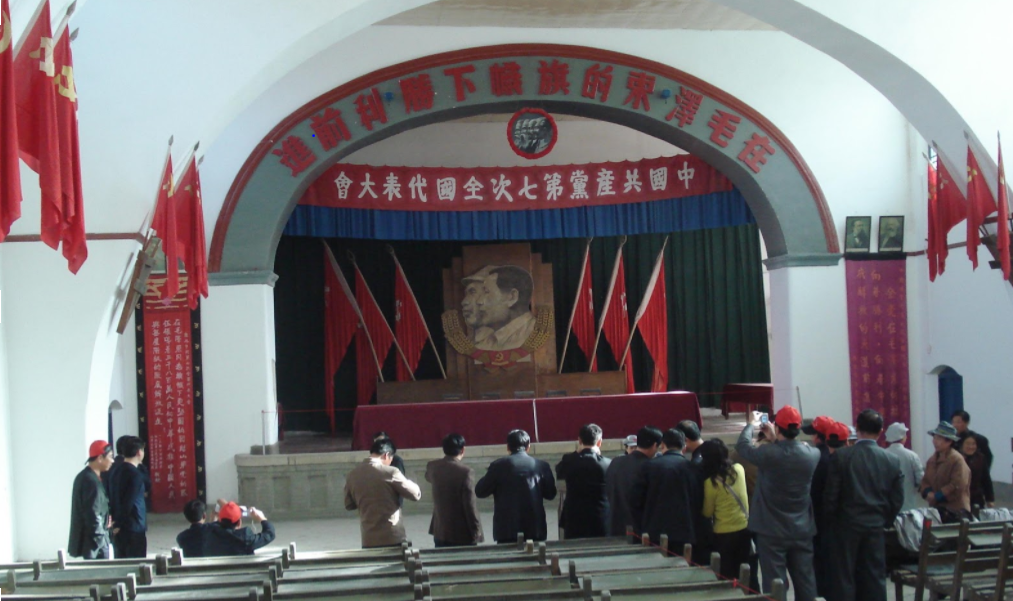 Written by Kirk A. Denton.

In 2004, the offices of the State Council and the Central Committee of the Chinese Communist Party issued an outline affirming ‘red tourism,’ a state-sponsored program to encourage travel to historical sites related to the Chinese communist revolution, as a ‘key front for patriotic education.’

The outline emphasized that patriotic education, which one might also call ‘propaganda,’ needs to adapt to a changing social environment:

In the face of new situations and new responsibilities, the [old] methods of patriotic education must urgently adapt and renew themselves. To actively promote red tourism, to put ideology, morality, and education into visiting and traveling, to take revolutionary history, revolutionary tradition, and revolutionary spirit and transmit it to the masses through travel will benefit the propagation of progressive culture, raise the quality of people’s thought and morality, increase the effectiveness of patriotic education and nourish the people with knowledge, stir their souls, stimulate their spirits, and enlighten their thoughts, thereby allowing them to throw themselves with greater confidence into the work of building socialism with Chinese characteristics.

Red tourism was born out of a recognition that more conventional modes of propaganda – school textbooks and museums, for instance – struggle to reach a younger audience raised on commercial pop culture and digital social media. The problem faced by the party/state in China is how to maintain the relevance of revolutionary history – which values self-sacrifice and loyalty to the cause above all else – in a neoliberal socio-economic environment in which individual drive and entrepreneurship are so critical. It’s a difficult dance: the party/state needs the legacy of the revolution to undergird its ideological legitimacy, but its own policies have moved the country into a market economy its revolutionary forbears would find positively counterrevolutionary. The flip-side problem: how to hail that revolutionary past without unleashing its radical implications, which could be turned against the neoliberal state.

Red tourism sites are places associated with key moments in the communist narrative of the revolution: the founding of the CCP, the formation of the Red Army, the Long March, the War of Resistance Against Japan, and the military struggle against the Nationalists; or with revolutionary leaders such as Mao Zedong, Zhou Enlai, Liu Shaoqi, and Peng Dehuai; or with revolutionary heroes and martyrs such as Zhao Yiman and Dong Cunrui. Red tourism centers on ‘authentic’ sites where the revolution took place, though it also enhances those sites with museums and memorial halls that explicate and narrate their official meaning. Anyuan, where communist leaders had organized mine workers in the late 1920s, was the first officially-designated red tourist site; hundreds of such sites now make up the red tourism network: Shaoshan, Jinggangshan, Ruijin, Yuhuatai, Yan’an, Red Crag, Xibaipo, to name a few. Dotting the national map with revolutionary sites linked into tourist circuits marks an attempt to impose a state revolutionary memory on the very landscape of China. In inscribing the nation with the history of the revolution, historical narrative merges with the territorial space of China. Red tourism has recently taken on global dimension: as part of Xi Jinping’s One Belt, One Road initiative, China and Russia have launched the ‘Sino-Russian Red Tourism Large-Scale Exchange Activities.’ Indeed, since Xi came to power, red tourism has been ramped up as an ideological tool. One new site on the tourist circuit is the village of Liangjiahe, where Xi spent several years as a ‘sent-down youth’ during the Cultural Revolution.

Red tourism, as experienced by the vast majority of Chinese tourists, is a collective, participatory, performative, and ritualized affair. In this sense, though it lacks their sacred and divine character, it shares with earlier religious and revolutionary pilgrimages a desire to connect spiritually with a place of special meaning through enactment of stylized performances and rituals: singing, dancing, reciting the Communist Party pledge, dressing in Red Army uniform, taking photographs, eating ‘revolutionary’ food, etc. Its collective nature makes it a potentially powerful vehicle for the propagation of shared identities and shared historical memories.

Many Chinese tourists to revolutionary sites are part of tour groups organized by work units, schools, and state and private corporations. One particular work-unit-sponsored tour group to Jinggangshan – editors and reporters from a news agency – marched the Carrying Grain Path, on which Zhu De and Mao are said to have selflessly carried grain for their soldiers, dressed in Red Army uniforms and caps in order to better ‘experience the Jinggangshan spirit.’ Red tourism is often incorporated into a work unit’s ideological training for its employees. The Beijing Huashang Management Institute, for instance, makes a trip to Jinggangshan an integral part of the educational experience for its future businessmen and entrepreneurs.

Clearly, though, many red tourists do not receive the messages the state wishes to impart through red tourism. There exist a range of reactions among red tourists, from retired teachers keen to learn about history to a young couple obliviously to anything but each other. In the documentary film New Socialist Climax (2009), a female boxing promoter from Beijing is asked by an off-screen voice what brought her to visit Jinggangshan. Her initial response: ‘Mainly to pay tribute to the revolutionary martyrs and also to cultivate patriotism in my son.’ She explains that she had ‘yearned’ from a young age to visit Jinggangshan, especially because her father had ‘defended our nation in the Korean War.’ Then the woman starts talking about her son, who is seen wandering around the site – the Jinggangshan Revolutionary Martyrs Park – looking incredibly bored. She says that her son has great ambitions (to be prime minister!) and that she brought him with her to ‘gain confidence’ so as to be better able to fulfill those ambitions: ‘Folks say that you should come to Jinggangshan if you want more money or power. Jinggangshan guarantees a promotion. . . . So I told my son, visit Jinggangshan if you want to be a big shot.’ In this interview, the woman’s faith in the revolution is juxtaposed with a folk superstition that visiting sacred revolutionary sites will magically bestow benefits on visitors and help them navigate the difficult terrain of the market economy. In another scene in the film, an older man who is part of a Buddhist group visiting Jinggangshan recites aloud a poem in front of the gate to the martyrs park. The poem is a long lament against corruption, and it is clear that the man has chosen the site for this public performance because of its symbolic and political resonances and to highlight the contrast between the ideals commemorated in the martyrs park and the corrupt reality of the CCP.

But most red tourists neither want to receive some magical career boost nor to confront state power at its ideological core. They travel to revolutionary sites to have fun, relax, eat and drink, see the sites, and maybe learn a thing or two. If they have a relationship with the revolutionary past at all, it is as a ‘tradition,’ a bygone era that has little relation to the present. Red tourism is built on an assumption of a temporal – and spatial, since most red tourists are urban and most red tourist sites rural – distance between the consumer and the product being consumed. The revolution is no longer something to be lived, just something to be consumed. Red tourism contributes to making of the revolution a ‘tradition,’ one that the party/state can use as a historical foundation, but that is safely ensconced in the past where it can less easily be turned against the present.

Kirk A. Denton is professor of modern Chinese literature and culture in the department of East Asian Languages and Literature, The Ohio State University. This essay was adapted from chapter 10 of his book Exhibiting the Past: Historical Memory and the Politics of Museums in Postsocialist China (University of Hawaii Press, 2014). Image Credit: Kirk A. Denton.