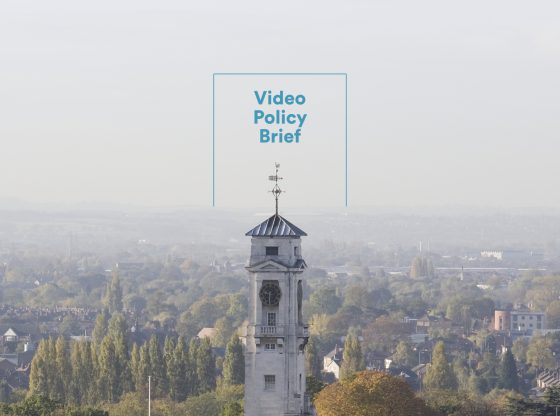 In 1966, Robert F. Kennedy, JFK’s brother, went to South Africa to give a speech on individual liberty and freedom of speech. Kennedy said the following: “There is a Chinese curse which says “May he live in interesting times.” Like it or not we live in interesting times. They are times of danger and uncertainty; but they are also more open to the creative energy of men than any other time in history”.

Fifty years on, in 2017, we are, once again, living in ‘interesting times’. This is particularly evident in the UK-China relationship. While the United Kingdom is entangled in its Brexit conundrum we are witnessing the emergence of China as a rising global power. Against this backdrop of changing power dynamics, the relationship between the United Kingdom and the PR China is arguably going to be become more important than ever.

When we talk about British engagement with China, most people would agree that dialogue and cooperation is preferable over confrontation, for example when it comes to addressing conceptual gaps about democratic governance and human rights. And while of course it is true that dialogue is desirable, we hear very little about how it can be made to work.

A number of questions spring to mind. In such an intercultural dialogue, who is supposed to talk to whom? Should a dialogue be confined to selected British and Chinese elites, for example politicians, traders and investors? Or does it aspire to become a more inclusive dialogue across civilizations and thus involve citizens from all walks of life? And how shall such a dialogue be conducted? When discussing the issue of citizen diplomacy, the psychoanalytical anthropologist Howard Stein noted as early as 1987 that — I quote — “(…) in recent decades, approaches to conflict management and resolution–from clinical dyads to families to corporations and international diplomacy– have become icreasingly concrete, narrow, manipulative and mechanistic.” — unquote. This insight raises the question how existing UK-China dialogue forums are designed and delivered. Are they possibly ‘concrete, narrow, manipulative and mechanistic’, too?

In the following I will argue that if we want genuine dialogue between the UK and China we need to have faith in people. Here I concur with the Brazilian educator Paulo Freire. In Freire’s words – I quote – “(faith) in people is an a priori requirement for dialogue (…) Without this faith in people, dialogue is a farce which inevitably degenerates into paternalistic manipulation. Founding itself upon love, humility, and faith, dialogue becomes a horizontal relationship of which mutual trust between the dialoguers is the logical consequence” – unquote.

I will now turn to one of the state-sponsored venues aimed at fostering UK-China relations. On December 4th until 7th the next iteration of the UK-China High Level People to People Dialogue will take place in the UK. Rather than a celebration of an alleged ‘Golden Era’ in UK-China relations, this event should be seen for what it is: a false advertisement. This is not so much a people-to-people dialogue but strictly a government-to-government affair.

The Co-chair of the UK-China High Level People to People Dialogue is Mr Jeremy Hunt, the UK’s Secretary of State for Health. This is the same person who at the 2015 conference of the Conservative Party suggested that tax credit cuts supposedly would entice Britons to work as hard as the Chinese. Jeremy Hunt’s Chinese counterpart, Mrs Liu Yandong, is the Vice Premier of the People’s Republic of China. One of Mrs Liu’s key qualifications prior to becoming Vice Premier was being the Head the Chinese Communist Party’s United Front Work Department between 2002 and 2007.

What is billed as ‘people-to-people dialogues’ should be seen as ‘VIP monologues’, where British and Chinese dignitaries effectively talk past each other. But to be fair, government officials from both sides do actually address specific issues in the bilateral relationship in the ten strands on education, culture, sport, tourism, health, women, social equity, youth, regional cooperation, as well as science and technology. And while British and Chinese government officials are of course also citizens, as elite members of their respective establishments they are hardly representative of their population at large.

One could argue that there is nothing wrong for the British Foreign and Commonwealth Office seeking a better relationship with a rising power such as China. But this legitimate engagement with what could be termed ‘official China’ has come at the expense of communicating and collaborating with representatives of ‘unofficial China’. And while the Chinese party-state’s intransigence and unwillingness to give Chinese civil society a place at international forums is certainly a problem, it appears to me that the reluctance to experiment with new China engagement approaches renders the British side equally culpable.

While it will be difficult for British hosts to invite Chinese individuals to UK-based people-to-people dialogues who are openly critical of the Chinese party-state, my own research and consultancy work over the past fifteen years has shown that there are Chinese societal actors which represent ‘unofficial China’ and can still be considered ‘politically safe’.

Despite the current crackdown on China’s civil society, numerous independent-minded Chinese academics, journalists, public interest lawyers, and civil society practitioners remain who enjoy good relationships both with party officials and with members of China’s organised society. These highly networked Chinese individuals can and should be invited to join UK-China people-to-people dialogues. They have deep insights into Chinese reform processes, are willing to share their experiences and are generally open to intercultural communication and collaboration.

Some of my skeptical British colleagues may still not be convinced. They could argue that Chinese government officials are unlikely to engage in more freewheeling, egalitarian and participatory dialogue forums. But that is not what I have experienced.

I had the good fortune to manage the EU-China Civil Society Dialogue Programme on behalf of the European Commission. This four year initiative was co-funded by the British Foreign and Commonwealth Office in 2011. In the context of this dialogue programme our project team successfully proto-typed what Mark Pixley and Karen Lim have called the communication and collaboration conference model. This highly innovative conference model maintains the strengths and comfort of a speaker-led format while providing an interactive and participatory process that is designed to enhance relationships among dialogue participants, deepen understanding of the dialogue topics, and also helps to create actionable follow-up projects.

From 2011 until 2014 and in the context of this civil society dialogue programme eight hundred participants engaged in conference-based learning. Dialogue participants discussed issues ranging from climate change, environmental health, labor relations, child welfare, social entrepreneurship, information disclosure, and government procurement of CSO services to disability rights. The eight dialogues brought together Chinese policy makers from the central, provincial, and municipal level, Chinese academics and civil society practitioners from all over China as well as European academics and practitioners from the United Kingdom, Germany, Belgium, France, Italy, Greece, Estonia, Poland, Romania, and Latvia. The successful implementation of the EU-China Civil Society Dialogue Programme has taught me that it is entirely possible for us to simultaneously engage with ‘official’ and ‘unofficial’ China.

In this policy brief I have argued that the non-inclusive UK-China High Level People to People Dialogue should be reformed along more egalitarian and participatory lines. This could be done by making good use of the communication and collaboration conference model. If dialogue organisers are more interested in upholding the rather formulaic government-to-government format they should rename the dialogue, e.g. along the lines of the U.S.-China Social and Cultural Dialogue. A UK-China Social and Cultural Dialogue can indeed be government-led. Renaming the dialogue forum would allow Europeans and Chinese citizens 1) to reclaim the term ‘people-to-people’, 2) to go beyond the narrow trade and investment interests of their respective governments and 3) to jointly reimagine a UK-China relationship which also takes shared humanitarian, cultural and ecological concerns into account.

Andreas Fulda is an Assistant Professor at the University of Nottingham.