Yu Xiuhua: Travelling Through the Mud of Life by Poetry

Home /China, Culture and Society/Yu Xiuhua: Travelling Through the Mud of Life by Poetry 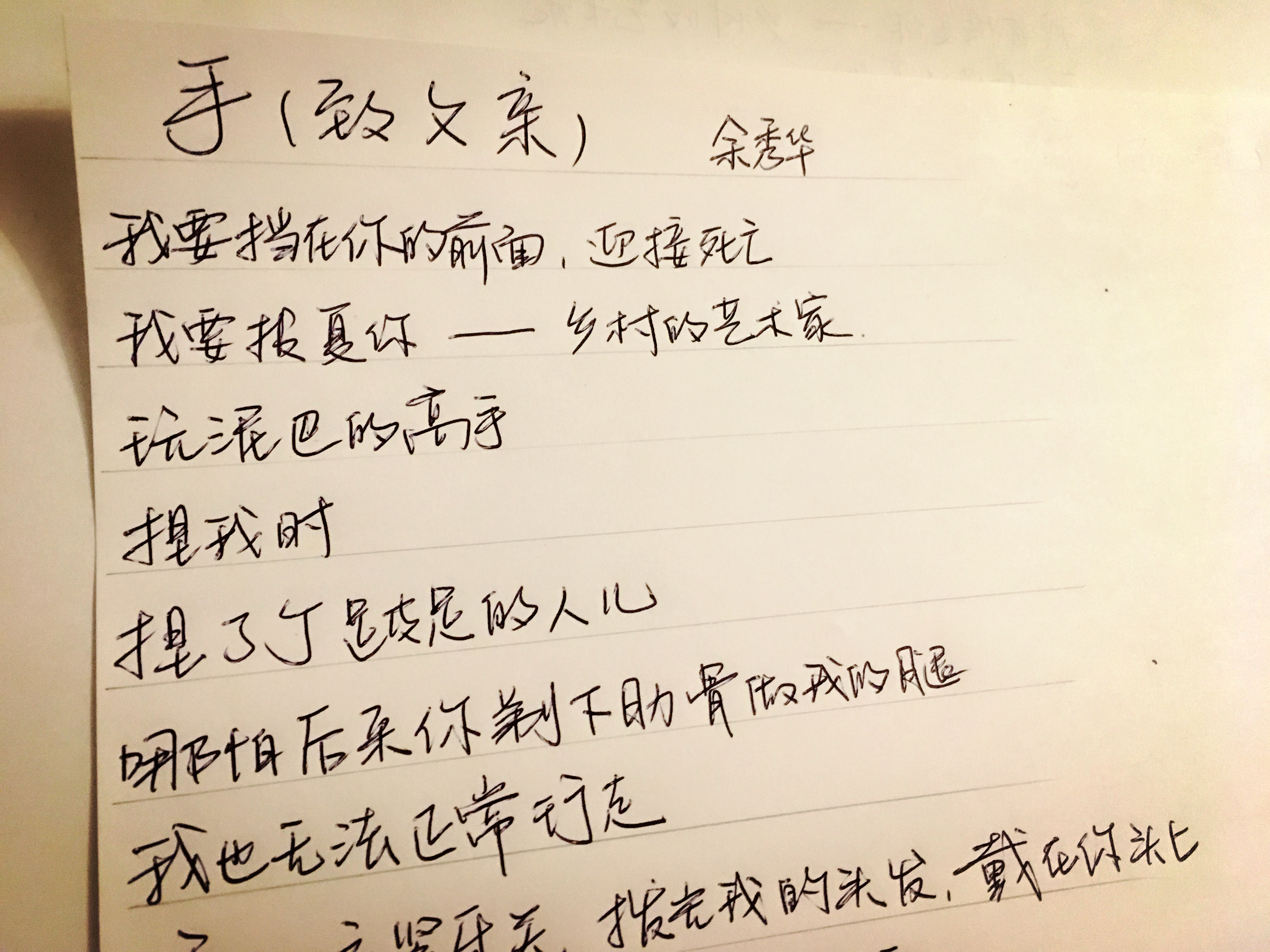 2015 started with a bang for Yu Xiuhua. In a span of months, her name graced front pages of newspapers, prime-time television shows, and the far corners of the Internet. A country woman no longer, she became the most talked about poet in China. Two years later, the “Yu Xiuhua Craze” shows no sign of abating, sustained by the new “poet laureate’s” consistent presence on social media, her untiring appearance at promotional events, and three best-selling collections of poetry, all of which continue to attract readers to her work and pique their interest in the person behind the writing. Already, an award-winning documentary has been made about her, and two of her poems have been set to song by popular musicians. A feature film based on her life story is reportedly in the making.

Yet Yu Xiuhua’s existence before her sudden fame was quite unremarkable, in fact, so prosaic as to be indistinguishable from the lives of China’s rural masses. She was born in 1976, the only child to subsistence farmers in the marginal lands of Hubei Province. In contrast to the country’s flourishing cities, Yu Xiuhua’s village is an unintended time capsule of remote rural China: rustic, isolated, and unchanging, where the only signs of modernity are early-model cell phones and slowly arriving Internet connections. A typical life path for a girl like Yu Xiuhua, if she wanted something better than the life of her parents, would be to migrate to an urban centre after basic schooling and become an assembly-line worker in the plant of a manufacturing powerhouse such as Foxconn, the famed iPhone maker. This life path, however, was not possible for Yu Xiuhua because of the cerebral palsy she suffered due to a difficult birth. With restrained physical mobility and speaking and writing challenges, she struggled through 9th grade and then became an “idler” in the village. At age nineteen, her parents arranged for her a loveless marriage to a man from out of town, a migrant worker who was rarely at home.

Unbeknownst to the people around her, Yu Xiuhua was living the secret life of a poet while labouring in her roles of a daughter, a wife, and a mother. Poetry was an easy choice because “it is a genre of the fewest words among all types of writings,” as Yu Xiuhua herself has said. Her first poem, written in 1998, entitled “Body Print,” starts with this line: “I crawl forward in the mud.”  After that, the river of poems kept flowing. By the first months of 2015, when fame struck, she had accumulated over 2,000 poems. These pieces represent spent time, which means living with a purpose. For Yu Xiuhua it is a living reflection on, but also parallel to, her perfunctory village life; it is an approach, one may say, literally as well as figuratively, to Martin Heidegger’s vision that “man dwells on this earth poetically.”

The space for Yu Xiuhua’s “poetic living” is the Internet, which she first found in an Internet Café in the nearest town and later through a donated used computer located in her cramped bedroom. The Internet connects Yu Xiuhua with strangers from invisible but massive online poetic communities. This makes her writing more rewarding, although still an arduous endeavour; but her retreat further isolates her from her family and the villagers, who now more than ever consider her an enigma and an irritation, even after her writing is no longer a secret. Internet Literature is a good signpost of China’s advanced net economy and has been a phenomenal success if measured in words typed numbers of views, and the bank accounts of a few superstar net writers. Dominated by fiction and often scorned by critics, the genre is a kaleidoscope of kitschy entertainment in the form of stylish utopias, imitative extravaganza, and enticing fantasy. But beyond the commercial excesses of Internet Literature lie its values of access and the democratization of writing, not to mention its embrace of experimentation. So, Yu Xiuhua may consider herself fortunate to be living in the age of the Internet, which transforms her loneliness into a virtual existence and enables her to create a poetic persona of voicing and connecting. The making of this new poetic persona for Yu Xiuhua started with her steady online postings and culminated in her poem “Crossing Over Half of China to Sleep with You” that went viral in the final days of 2014.

Netizens of China are familiar with outrageous titles designed to compete for their ever shorter attention spans, but the catchphrase “sleep with you” in the title of a poem is still surprising and enticing. These are the opening lines:

Actually, sex is almost the same whether on top or at the bottom
It’s just the force of collision between two bodies
the blooming of a flower propelled by this force
the fictitious spring created by this flower
which we mistake as life restarting

In the Chinese text, where “sex” occurs is the expression “shui ni he bei ni shui,” literally, “sleep you and slept by you,” an expression associated with colloquial vulgarity and low social class. The substitution of love by sex then is a defiant act, a stripping of the former’s cultural wrappings and its poetic conventions. We should note that the speaker does not offer a context for comparing the two, but merely articulates the wish of “sleep with you,” while fully aware of the deficiency of this wish. If this poem is a love poem, and indeed has been read as a love poem by millions of people, it is a vision of love tinged with defects, irony and exasperation.

Love is commonly understood as the first charge of poetry, which is how people appreciate the form most naturally and aesthetically. In China, where poetic tradition runs long and deep, quotable lines from the past are often spontaneous exchanges of affection and friendship. The experience of love and its expression, however, face new challenges in contemporary China, which is characterized by rapid economic development, manufactured urbanization, and unsettling social stratification. Relationships are not necessarily easier just because people have more ways to connect, but love is tangibly harder, thus more precarious, because of the new distances due to pretences and illusions of all kinds, such as money and status. It is natural for Yu Xiuhua to speak of love as a poet, but quite unusual the way she speaks of it: rugged language and bombastic howling that bear down on naked desire and wanton longing. The context of love is defined by its very lack. When the person behind the poem becomes exposed and familiar, that is, when readers discover Yu Xiuhua’s life of poverty, disability and emotional starvation, they experience her sincerity and authenticity, which in turn fuels her popularity to the stratosphere. Online reading is not conventional, informed by internal textual restraints promoted by the New Critics; rather, it is a reading of expansive searches and association, in which all traces of the author in the virtual and the real worlds become a text for dissection. Yu Xiuhua is not the first Chinese author to be subjected to such a reading but the first one who has reaped its full benefits.

Love is the constant theme of Yu Xiuhua’s poems but disability is the lens through which Yu Xiuhua is being observed by the world and the one through which she views herself, sometimes sympathetically, but more often critically, approaching a confessional self-obsession that lays bare her fear and hope, darkness and faith, pain and desire. Few of her readers can stand indifferent to these lines: “This is how I often spend my nights: Tearing flowers to pieces / –I doubt my love, every time I did I broke into pieces / I doubt my born imperfections: / the source of my instinct for destruction.” Or remain untouched by these: “No matter how I try, I cannot arrive at his level / I believe in love for him and for others / but not on my own.” In this poem “Hands—To Father,” she angrily takes on her father, maybe God himself:

I will stand before you, welcoming death
I will avenge you, the artist in the village
a master of clay-making
who gave me a pair of crooked feet
while shaping me into human
Even if you would cut off your ribs to
remake my legs
I could never walk like others
…. ….
Please don’t pull out new weeds on my grave
Next life, I will not be your daughter;
It would be better to be a guard dog for the Yu family

These charged words bring us closer to one of Yu Xiuhua’s darkest moments, where we sense a rupturing of pain and bitterness; but still a serene resilience and a yearning for life.

The popularity of Yu Xiuhua rides on her mystique as a person with a disability and as an unconventional poet whose unique life intersects with her poetic persona. She is a whiff of fresh air to contemporary Chinese poetry worn out by intellectual posturing and complicated wordplay that make reading an exhausting game of the mind. Reading Yu Xiuhua is a far less daunting task because the meaning is always located within her disfigured body and injured soul. This version of reality is a sort of depressive realism that communicates truth and disperses illusions. We do see cases of Yu Xiuhua’s surprising word choices and fragmented images, which carry the flavour of the Misty Poetry of the 1980s, but more often she impresses with her language of sentience and artless simplicity; she writes as she lives, constantly working with the tension between this life and its imagined alternatives.

Yu Xiuhua is an appropriate allegory for contemporary Chinese society in the flux of value conflicts and moral crisis. On the surface, the mainstream media such as CCTV and People’s Daily embrace her enthusiastically for their own use. They highlight her personal story of self-reliance and perseverance, which is palatable to the official narrative of the Chinese Dream. However, this “managed reading” belies the complex textuality of Yu Xiuhua’s poetry: The twin marks of disability and sexuality represent an ideological split that shatters cultural expectations and breaks social stereotypes. In an age of materialistic excess, Yu Xiuhua captures sentiments of discontent and celebrates the values of authenticity and of existing as a free spirit.

Dian Li is an associate professor of modern Chinese literature at the University of Arizona, USA and a guest professor at Sichuan University, China. Image by Dian Li.