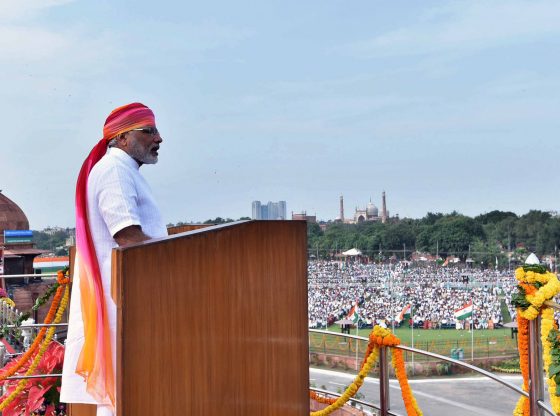 Narendra Modi will probably remember 2017 as a difficult year, despite starting in the best possible way for his Bharatiya Janata Party (BJP). In February and March, the party stormed the elections of Uttar Pradesh, India’s largest state, by winning over three fourths of the seats. For many, that signalled the fate of the 2019 general elections was already decided in favour of a seemingly unstoppable and increasingly popular Prime Minister.

However, the following months took a surprisingly difficult turn for Modi. First, the release of data on economic growth dealt a serious blow to the Prime Minister’s image as the man who could bring ‘achhe din’ (better days) to India. The data, released in September, showed that the Indian economy was decelerating for the sixth quarter in a row, from 9.2 per cent in the first quarter of 2016 to 5.7 per cent in the second quarter of 2017. The moderate increase to 6.3 in the third quarter did not bring much relief to the Prime Minister, as the Indian economy’s performance remains well under its potential.

Modi and his party will be on the defensive and with a lot to lose in a crucial pre-election year. Three important states will go to polls in 2018 (Rajasthan, Madhya Pradesh and Karnataka) and, even more importantly, the entire political system will be in general election mode for most of the year

More worryingly, there is no sign that India’s job crisis is about to get better anytime soon. Twelve million people enter the workforce each year, but the economy is simply unable to absorb this growing labour force. According to the Labour’s Bureau Employment-Unemployment Survey, total employment actually shrunk by 0.4 per cent per annum between 2013-14 and 2015-16. To make things worse, according to the Centre for Monitoring the Indian Economy, 1.5 million jobs were lost between January and April 2017, most probably as a consequence of the decision to demonetise 86 percent of the country’s currency in late 2016. The introduction of the Goods and Service Tax (GST) – by far Modi’s most important economic reform – did not make things any better. While few doubt that, in a medium-term perspective, the reform will contribute to economic integration in India and will boost GDP growth, many agree that both the design of the new tax and its implementation left much to be desired and most probably further slowed down economic growth and job creation.

The release of the data on the impact of demonetisation was another big blow for Modi. The results in Uttar Pradesh had shown that, in the immediate wake of demonetisation, there was widespread support for the policy and that voters were happy to suffer even severe hardship in terms of job losses, cash shortage and the virtual halt of India’s economy in the name of the greater good of fighting corruption. However, just one per cent of the demonetised notes were not returned to the banks, indicating a complete failure in terms of eradicating ‘black money’ – a failure that came at a very high cost.

Even worse for Modi was the publication by The Wire of an in-depth investigation on the businesses of the BJP’s president (and Modi’s right hand man), Amit Shah’s son, which showed that his company’s turnover increased by 16,000 times in the year following the election of Modi. This dented the Prime Minister’s image as a crusader against corruption, something that undoubtedly helps his popular image.

This was reflected in the Gujarat elections results, Modi’s own state and a bastion of the BJP. The saffron party eventually won the elections (for the sixth consecutive time), but with a much-reduced majority. The bad news for the BJP was that, first, the BJP fell short of its declared objective of winning 150 seats (out of 182), securing only 99. Even more worrying is the trend of the party’s popularity. According to a series of pre-poll surveys conducted by the Centre for the Study of Developing Societies (CSDS), the BJP’s vote share declined from 59 percent in August to 42 percent in November. While the actual vote share (49 percent) showed that, in the last two weeks before the elections, when Modi himself campaigned extensively, the BJP regained some ground, it is clear that the party faced a serious challenge in supposedly home turf. The surveys also show that Modi’s popularity in his home state has declined by 20 percentage points between August and November (from 67 to 47 percent).

This does not – by any means – indicate that Modi has become unpopular or that the BJP’s prospects for the 2019 general elections are not still very bright. In fact, as post-poll surveys showed, it was sufficient for Modi to enter the battlefield in the last few weeks before voting for the BJP’s popularity to spring up again. However, it is clear that voters are starting to realise the Prime Minister cannot miraculously transform India into a developed country within an election cycle, even though many (especially young) Indians still see him as their best bet. Nevertheless, it is worth remembering that Modi won the 2014 elections with only 31 perent of the votes: and a relatively small drop in the vote share could mean a catastrophic drop in terms of the BJP’s seat share in India’s first-past-the-post electoral system.

The good news for Modi is that the Gujarat elections showed once again how the BJP has one and only one asset: Modi’s popularity. This means that even if 2017 has been a difficult year for the Prime Minister, the electoral results – the only thing that really matters in politics – will make Modi even stronger within his own party, silencing any possible source of internal opposition to his dominance.

What can we expect for 2018? Economically, growth is expected to bounce back, but it is likely to remain below its potential and well below the rate that is needed to lift millions of people out of poverty. Very worryingly, Gross Fixed Capital Formation – a key measure of investment – dropped to 28.3 percent of GDP, down from 42.5 perent in 2007. Job creation is, and will remain, stagnant. In the meanwhile, the continuing lack of investment in the rural sector – which was badly hit by demonetisation in a context of a seemingly never-ending agrarian crisis – means that the livelihoods of rural dwellers (a majority of the population) will depend once again on the Monsoon. Seemingly, there are no ‘achhe din’ in sight.

This means that Modi and his party will be on the defensive and with a lot to lose in a crucial pre-election year. Three important states will go to polls in 2018 (Rajasthan, Madhya Pradesh and Karnataka) and, even more importantly, the entire political system will be in general election mode for most of the year. This might well mean that the BJP, having failed to bring the ‘achhe din’ that it promised and facing a still limited, but growing, discontent among large sections of the voters, might resort to communal polarisation as the pillar of its electoral strategy. We had a sense of what we might expect in the latest phase of the Gujarat campaign, when the BJP increasingly focused on divisive issues like the construction of a temple dedicated to Ram in Ayodhya – or when Modi himself accused the former Prime Minister, Manmohan Singh, of conspiring with Pakistan to tamper with the elections. It could easily get much uglier than that. The appointment of Yogi Adiyanath, a Hindu extremist who has widely encouraged and justified the use of violence against Muslims, as Uttar Pradesh’s chief minister might well signal the road that the BJP intends to travel in the future. Still, one thing is for certain, India has a challenging year ahead.

Diego Maiorano is a Leverhulme Early Career Research Fellow in the School of Politics & International Relations at the University of Nottingham, UK. He tweets @diegoemme. Image Credit: by Indian Ministry of External Affairs/Flickr.