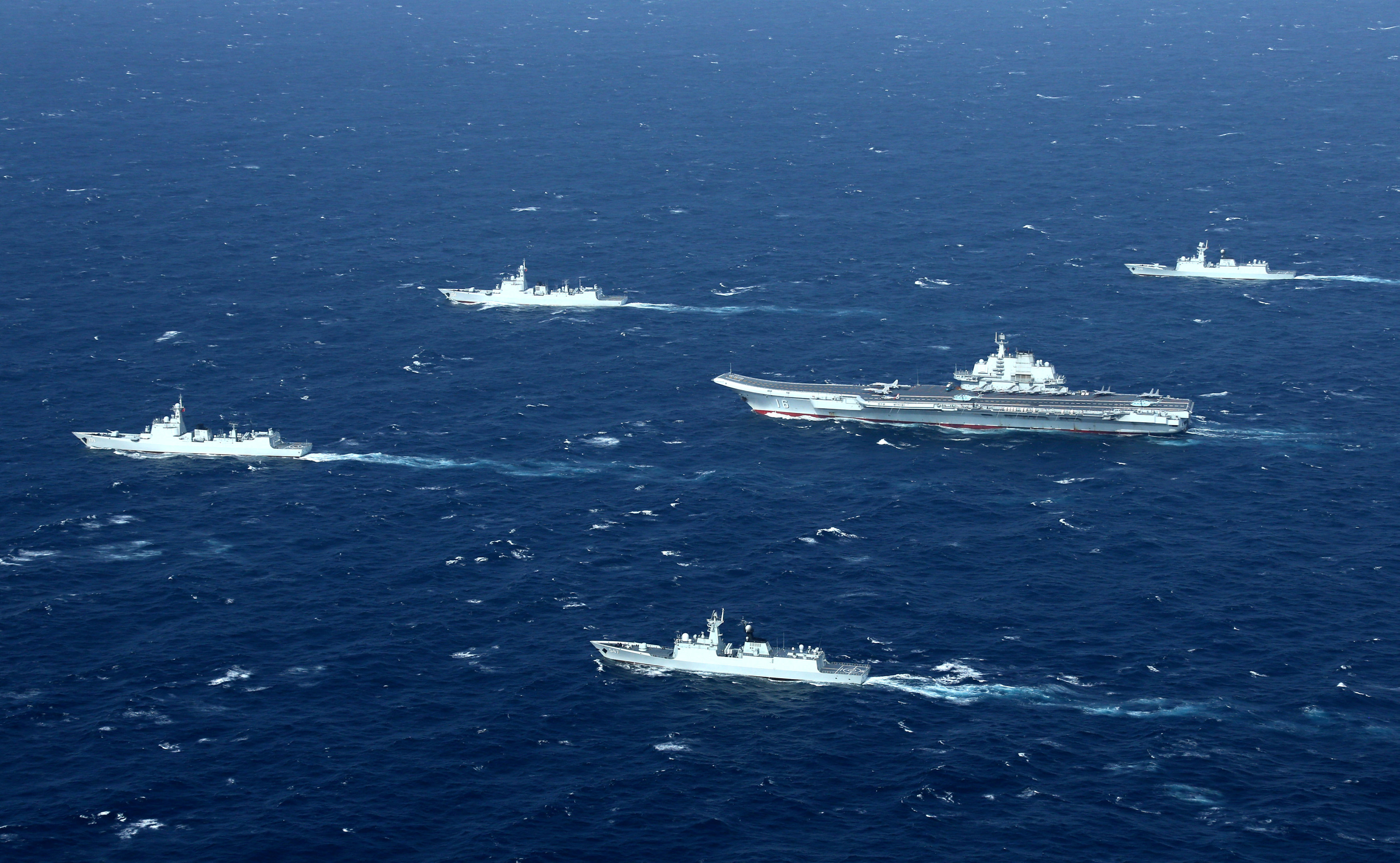 China has been busy in the skies around Taiwan and shows no signs of stopping. Beijing concluded 2017 with a series of high-profile exercises by the People’s Liberation Army Air Force (PLAAF) circumnavigating Taiwan. The year 2018 started with a breach of an agreement from March 2015 to restrict an already controversial M503 flight route for southbound traffic by announcing the opening of the route for northbound traffic. Furthermore, the Civil Aviation Administration of China (CAAC) also announced the opening of three additional east-west routes connecting M503 with China, two of them close to Taiwan’s outlying islands of Kinmen and Matsu.

Both developments have direct implications for Taiwan’s defense posture. M503 is close to Taiwanese air force (ROCAF) training areas, while the W122 and W123 routes pass by Taiwan’s forward-deployed defenses on Matsu and Kinmen. ROCAF training areas are sandwiched between two civilian corridors: M503 and long-established routes along Taiwan’s western coastline. The Taiwanese air force previously vacated one of its training zones after Beijing announced its East China Sea Air Defense Identification Zone (ADIZ) in 2013. Thus, M503 is already affecting the ROCAF’s freedom of action. Moreover, the ability of Taiwanese combat air patrols (CAP) to respond to regular PLAAF patrols buzzing along Taiwan and to monitor moves by PLA Navy vessels through the Taiwan Strait will be restricted.

Stepping-up activity along Taiwan’s ADIZ, forcing Taiwan to scramble fighters in response, is precisely what Beijing’s next step turned out to be. However, the real danger lies in China’s push for a gradual change in the status quo in the skies over the Strait.

The recently published National Defense Report identifies 23 PLA exercises between September 2016 and December 2017. That number may not sound too high, except that it is in addition to the usual response of Taiwan’s CAPs to PLAAF activity. Moreover, if we consider the types of planes that took part in those exercises and the routes they followed, it gives us a clearer picture of what Beijing’s purpose might be. The yellow course on the NDR graphics indicates missions in and out of the Miyako Strait that separates Okinawa and the Miyako Islands, both part of Japan. The red course indicates flights through the Bashi Channel that separates Taiwan and the Philippines. Both of the concerned waterways are strategic access points for the PLAAF and PLA Navy into the Pacific. The pink course indicates PLAAF flights that circumnavigated Taiwan, using the two mentioned waterways as entry/exit points.

The most common type of aircraft that take part in these exercises is the Xian H-6K, a Chinese derivate of Soviet Tupolev Tu-16 bomber entered service in the late 1960s and the closest the PLAAF has to a strategic bomber capability. However, its latest K variant shares only a resemblance to the original version. Its primary mission is not strategic bombing either. In its main combat configuration, the H-6K carries up to six YJ-12 anti-ship missiles or a similar number of CJ-10 land-attack cruise missiles. With this payload, a fleet of H-6K operating east of Taiwan could saturate U.S. Navy fleet missile defenses or target U.S. military bases on Guam.

However, fully loaded bombers are easy prey for intercepting fighter jets. U.S. 5th generation stealth fighters F-22s and F-35s pose a particularly grave danger. This is where the other types of PLAAF combat aircraft that joined the exercises (or combat patrols, as the PLAAF calls them) come into play. The Su-30, one of the most advanced fighter jets in the PLAAF arsenal, would protect bombers against adversary fighters; Shaanxi Y-8, in its electronic counter-measures (ECM) configuration, would provide additional protection for the H-6Ks. All three types were heavily involved in missions around Taiwan, and on several occasions all three were present. On multiple occasions Tu-154 electronic intelligence (ELINT) planes took part, collecting valuable data from Taiwan’s radar installations and other sensors. At least on one occasion, an IL-78MP aerial refueling plane participated, an essential element if China aims to maintain its presence farther from its airfields. Thus, China seeks to involve a broad spectrum of platforms, each with a critical role in extending the PLAAF’s presence east of Taiwan.

It would be tempting to conclude that recent PLAAF activity is a direct response to the Democratic Progressive Party’s (DPP) victory in the 2016 elections. The refusal by the new Taiwanese government to submit to Beijing’s demand to publicly accept the so-called “1992 consensus” appears to confirm that recent activity by the PLAAF is a form of punishment against Taiwan and its people for voting against Beijing’s wishes. However, temptations to punish Taiwan for the audacity of electing its government aside, PLAAF actions are also dictated by operational requirements stemming from the role the Chinese air force would play in a Taiwan contingency. The PLAAF’s H-6K fleet with an escort would be part of a forward-deployed anti-access/area-denial (or anti-intervention) umbrella with the focus on preventing U.S. intervention and attacking targets on Taiwan’s east coast. To that end, Chinese crews need to acquire sufficient experience with long-range flights and over-the-sea navigation, the latter being an especially demanding task even with advanced navigation equipment on board.

With the PLAAF making regular appearances in the skies around Taiwan, the time had come to utilize M503 and revoke the previously agreed-upon conditions. While it would be difficult to find direct evidence that the two developments are directly connected, it is highly unlikely that these steps were not discussed by China’s top leadership as part of a comprehensive approach to Taiwan, in the Small Leading Group on Taiwan Affairs, the Central Military Commission, and the Politburo Standing Committee. Whether we regard PLAAF exercises as part of the response to the DPP’s election victory or give more weight to the PLA’s focus on preparing its personnel for a military solution to the “Taiwan Question,” Taiwan is at the center of both decisions.

The M503 development seems less salient compared to the PLAAF’s muscle-flexing, but the breach of the agreement sets a potentially dangerous course. For the most part, the situation in the air across the Taiwan Strait relies on a set of rules that depend on respect thereof from both China and Taiwan. Moreover, since Taiwan has little interest in not following those rules, the onus is mainly on China. For example, the median line that divides the Strait into two sectors does not have the nature of an international boundary. It was first imposed by the U.S. in the 1950s to avoid escalation from both sides, and was subsequently respected by both sides (not counting accidental violations and individual incidents).

Taiwan is, without doubt, the primary target of China’s actions. However, it is not the only one. Japan is bothered by PLAAF’s presence no less than Taiwan, and Japanese fighter jets regularly scramble to counter PLAAF activity close to Japan’s airspace.

Taiwan’s response has been relatively measured so far. President Tsai Ing-wen emphasized during her year-end address in 2017 that Chinese military activity is a shared threat to all countries in the region. In reaction to the CAAC’s announcement regarding the M503 route, President Tsai again emphasized Beijing’s risky behavior. The message that Beijing’s actions are a shared concern for all is the right kind of signaling on the part of the Taiwanese government.

For its part, Taiwan’s Ministry of National Defense announced that it will no longer publicize PLAAF exercises unless the circumstances are extraordinary. The MND’s main argument is that these exercises are already closely monitored and overemphasizing such activity in the media only reinforces China’s psychological warfare against Taiwan. Indeed, Chinese party-controlled press published a photo of a H-6K bomber with a tip of a mountain in the background, claiming it was the summit of Yushan — Taiwan’s highest peak. The claim was demonstratively false upon closer inspection of Taiwanese landscape, but not everyone on the receiving end of China’s psychological warfare checked the validity of this claim.

However, whether to report PLAAF activity or not could become a lesser problem for MND and the Taiwanese government if and when PLAAF patrols start crossing the median line in the Strait or enter Taiwan’s ADIZ on the eastern seaboard. As long as they do not violate Taiwan’s sovereign airspace (leaving aside Beijing’s general disrespect for Taiwanese sovereignty), they would not be wrong, at least not from a legal perspective. An ADIZ is not sovereign territory. Like it or not, China does have a right to freedom of navigation, even if Beijing casually denies the benefits to everyone else. Legality of such action notwithstanding, the burden of reaction would be on Taiwan. A strong response risks unintended escalation; a weak response could mean that China’s continuous salami-slicing strategy will be successful. Taiwan could respond by sending its ELINT planes to China’s doorstep, but would China hesitate to shoot them down or otherwise harass Taiwanese patrol aircraft, potentially leading to a repeat of the Hainan Incident of 2001? There is no easy way to respond to such developments. And yet, PLAAF patrols disrespecting the median line and entering Taiwan’s ADIZ could soon become a reality, as Beijing will feel no moral constraints in breaching yet another agreement or tacit rule.

Perhaps the answer lies in close cooperation with Japan, which shares the same concerns over Chinese activities. Maybe it is indeed high time for U.S. Navy port calls in Taiwan, even if those only have a symbolic nature. After all, the mission that the PLAAF is training for and the anti-ship missiles carried by the H-6Ks serve to deny a U.S. Navy presence in the waters around Taiwan as much as they are meant to intimidate the Taiwanese people and their government. What is clear is that expanding the M503 route will not be Beijing’s last card.

Michal Thim is a Taiwan defense specialist with the Prague-based think-tank Association for International Affairs and a founder of the Taiwan in Perspective blog. He tweets @michalthim . This article was first published on Taiwan Sentinel and can be found here. Image credit: CC by Wikipedia Commons.