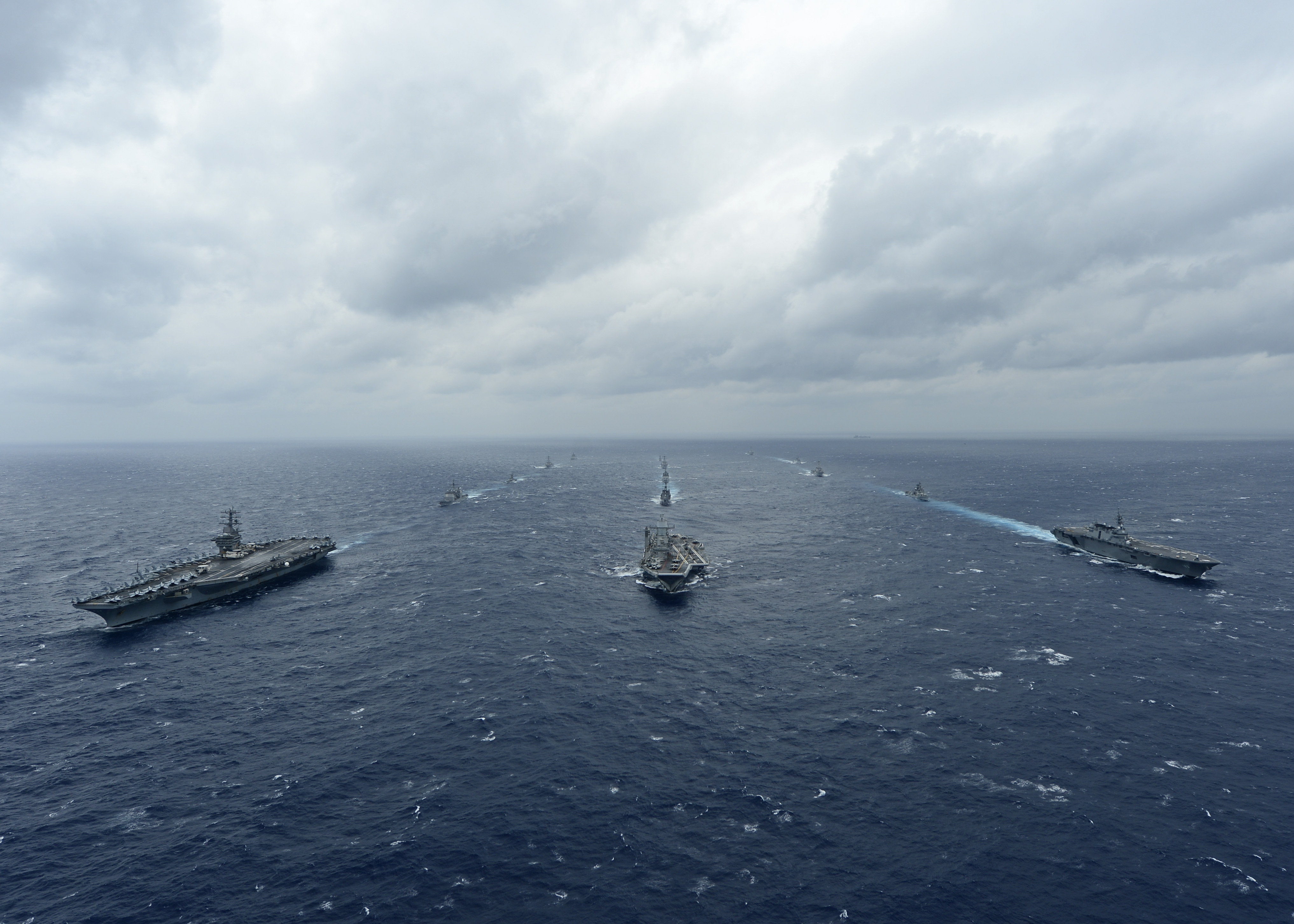 The Doklam standoff between China and India may have been defused, but it seems to be far from being fully resolved. The two Asian giants are still maintaining forces at the disputed region, and the prospects of the Doklam tinderbox being ignited and cascading into a wider Sino-Indian confrontation cannot be ruled out.

During the height of the tensions last summer, Professor James Holmes of the United States Naval War College outlined the maritime contours of such a conflict – unthinkable as it may be – in a Foreign Policy article titled “Who Will Win the Great China-India Naval War of 2020?”. While Holmes examines the strategic considerations of such a confrontation, it is also worth examining how it could develop at the operational level. Besides submarines operating independently, Beijing could well deploy an aircraft carrier battle group (CBG) – its most visible and potent manifestation of naval might – to the conflict, but this force is likely to operate with a high degree of circumspection because of the tremendous odds it faces.

Firstly, it would have to grapple with the “small-deck carrier conundrum”. Simply put, this dilemma revolves around what proportion of a carrier’s aircraft complement should be devoted to defence and to attack. Allocate more fighters to strike missions, and the task force’s susceptibility to threats increases; conversely, set aside more aircraft for force protection, and the carrier’s ability to project power declines.

In my article on the Indian carrier’s doctrinal roles against Pakistan in the latest issue of the Naval War College Review (NWCR), I contend that Indian flat-tops would face this problem because of their small aircraft complements. The People’s Liberation Army Navy (PLAN), too, would have to face this quandary during a war with India because it currently only operates small-deck carriers that embark limited tactical airpower.

China has the Liaoning in service, and the indigenously built Type 001A could be operational as early as this year. The Chinese are unlikely to deploy more than one CBG against India due to competing strategic interests in the western Pacific. It is worth noting that the Liaoning can carry around 20 combat aircraft and the Type 001A is expected to embark only a slightly larger air wing (in contrast, the American supercarrier routinely embarks well over 40 strike fighters). As I argue in my NWCR piece, during a high-intensity conflict involving major powers, a small-deck carrier would be hard put to defend itself, much less project force.

What is more, the Chinese carrier group would essentially be on its own. With no friendly air bases in the neighborhood (currently and for the foreseeable future) to support it, the carrier force could only defend itself against the enemy with its relatively meager air wing. In addition, aircraft based in mainland China will be curtailed in their support of the PLAN carrier force as they have to overfly countries such as Myanmar or Bangladesh in order to reach the Indian Ocean.

Compounding matters, this Chinese expeditionary force would be subjected to the “tyranny of distance”, as Holmes has correctly pointed out. And while there has been talk of China using its vaulted anti-ship ballistic missiles to negate India’s military superiority in its own backyard, most experts remain agnostic over the effectiveness of the weapon.

Any PLAN carrier deployment against India would therefore be highly defensive and cautious. China is likely to deploy a CBG well outside India’s considerable anti-access/area-denial umbrella, as the damaging – let alone sinking – of a Chinese flat-top could have disproportionate political and strategic repercussions. That being said, the carrier force would perhaps only partake in the protection of China’s key sea lines of communications in the Indian Ocean. Ships with the most critical cargo headed for mainland China could be convoyed with the CBG providing distant cover a la the escort carrier during the Second World War.

The PLAN carrier force could also launch hit-and-run attacks against India’s less well-protected outposts, such as those under the Andaman and Nicobar Command. These strikes would, however, be mere pinpricks given the limited payload of aircraft launched from either the Liaoning or the Type 001A, with their short takeoff and vertical landing-configured flight decks.

However, as I argue in my NWCR piece, a carrier force operating in the cavalry or hit-and-run role could exude a strategic effect out of proportion to its operational utility. A PLAN carrier force in the Indian Ocean would invoke in South Block memories of the USS Enterprise CBG deployment in the Bay of Bengal during the 1971 Indo-Pakistani conflict, or going even further back in history, the 1942 Doolittle Raid.

A PLAN CBG could thus be deemed a threat to vital Indian interests regardless of the material damage it could actually inflict. After all, India’s most recent maritime strategic document holds dear the “defence of India’s territorial integrity, citizens and offshore assets from seaborne threats”, and a Chinese flat-top roaming in the Indian Ocean would undoubtedly alarm Indian defence planners. As a matter of fact, it is likely that there will be public pressure on Delhi to “do something” should the Andamans/Nicobars come under attack.

The Indians would then try to find and attack the PLAN CBG, especially with their own carrier forces, but this would be a tall order indeed given the vast expanses of the Indian Ocean and with the Chinese fleet playing hide-and-seek. And unless the PLAN CBG commander is in the mold of William Halsey, a gung ho American admiral during World War Two, and approaches India’s littorals, the odds of his force being detected, let alone attacked, appear slim.

With the prospects of a large-scale contestation of opposing forces low, isolated clashes at sea might be the order of the day. PLAN submarines lying off major Indian ports could have some luck picking off merchantmen. These boats, together with the surface combatants of the CBG such as the Type 55 destroyer, may also lob – hit-and-run, guerilla style – long-range land-attack cruise missiles like the CJ-10 at India. In addition, Chinese subs could sow minefields near Indian ports and/or deploy special operation forces against Delhi’s maritime interests.

All in all, the 2020 Great Sino-Indian Naval War might turn out to be highly anti-climactic. Given the odds facing any PLAN CBG deployed to the Indian Ocean during such a conflict, it is not inconceivable that the Chinese CBG commander takes a page from the book of his country’s founding father as well as irregular warfare theorist extraordinaire, Mao Zedong, who advised retreating in the face of superior opposition.

The Chinese CBG leadership is thus likely to behave less like the Fighting Admiral “Bull” Halsey and more like Admiral Frank Fletcher, who has been soundly criticised for his caution as a carrier force commander during World War Two. Naval enthusiasts who may salivate over the prospects of a 21st-century Battle of Midway materialising during a Sino-Indian naval war will be disappointed however.  As long as the Chinese do not give battle, which they are likely to do as they are playing the “away” game and with scant resources, such a contestation will belong to the realm of military fantasy.

Ben Ho Wan Beng is a Senior Analyst with the Military Studies Programme at Singapore’s S. Rajaratnam School of International Studies, and he received his master’s degree in strategic studies from the same institution. Ideas in this piece were also expressed in the journal article The Aircraft Carrier in Indian Naval Doctrine. He can be reached at iswbho@ntu.edu.sg. Image credit: CC by U.S. Pacific Fleet/Flickr.

Is Pakistan’s economy pulled down by its politics?
India’s Northeast: A fulcrum in Delhi’s Act East policy