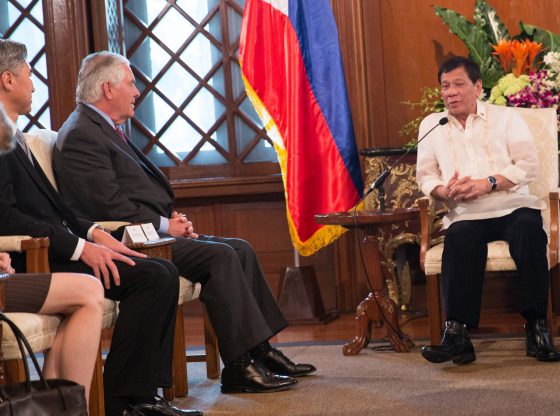 The relationship between the Philippines and United States is paradoxically both tense and tender. Having been an American colony for over forty years, the administration of Harry S. Truman granted the islands independence on 4 July 1946. Amidst the ashes of World War II, the first president of the independent Philippines, Manuel A. Roxas, heralded the end of American empire with a profound sense of gratitude for the accomplishments of the American colonial regime. Reflecting on the US legacy as a nation-builder, Roxas harkened an exceptional sense of benevolence as a benchmark for other colonial powers to emulate. As he himself noted, ‘the American flag flies more triumphantly today than ever before in history.’

Since then, the Philippines has maintained a durable and compact fraternity with its former coloniser. After independence, the United States had no more reliable ally than the Philippine state, which consistently volunteered its support both materially and rhetorically for ongoing American interventions into Asia. During the Cold War, Philippine Presidents from Ramon Magsaysay to Ferdinand Marcos offered the islands as a springboard for military ventures into Korea and Vietnam. Aside from a blip in the late 1980s, when the Filipino people ousted Marcos in the 1986 ‘People Power’ revolution and temporally annulled American access to military bases, this alliance has remained overwhelmingly positive, even as pressures from new global struggles like the War on Terror have threatened to open the fissures of dissent. It was only in November 2017 that firebrand Philippine President Rodrigo “Digong” Duterte literally sang the praises of the United States and its new president, Donald Trump, despite repeated overtures towards lessening the archipelago’s traditional reliance on American economic and military aid.

The question as to why this is the case remains puzzling. After all, the almost oxymoronic relationship between the Philippines and the United States can be seen as somewhat analogous to other Asian dependencies who experienced decolonisation during the same crest of independence movements that crescendoed after World War II. Britain, for example, maintained a robust informal influence over former colonies like India and Malaya (now Malaysia), even as such states were quick to distance themselves from the influence of former metropoles. Moreover, much like the Philippines, processes of decolonisation manifested not only in protracted periods of negotiation, but also in instances of horrific violence. The onset of the Huk rebellion after World War II spoke to this contested image of Philippine independence, much in the same way as the Malayan Emergency or the division of Vietnam articulated the differing visions of statehood that emanated from other Asian dependencies during this period. In this respect, the reasoning behind the Philippines’ consistent place in America’s informal empire appears confused. It will take a history that traces this phenomenon back to the source to understand why the islands remain so firmly within the American orbit.

As President Trump made his triumphant landing in Manila for the Association of Southeast Asian Nations (ASEAN) conference in November 2017, he was greeted by an unruly throng of protesters, who took issue with the President’s visit and the imperial dynamic it represents.

The reasoning for the Philippines’ paradoxical relationship with the United States stems from the inherently dichotomised nationalism that exists in the islands. This bi-nationalism, reflective of the systemic, socio-cultural divisions at play in Filipino society, created two competing yet coalescing narratives of the Philippine state. On one hand were the so-called “illustrado” class. Translated from Spanish as the “enlightened ones,” the emergence of a distinctly Filipino elite traces its ancestry back to the Spanish occupation of the islands. Educated abroad, often in Spain or other European metropoles, the children of wealthy, landowning Spanish mestizos came to form a distinct intellectual stratum in Filipino society characterised by monopolies on landowning, wealth, and political power. These actors were the mouthpiece for Western imperialism, and worked to consolidate and enhance the positions of power afforded to them. On the other side were those Filipinos insulated from the mechanisms of power. Popular groups like the Huks understood their relationship with Western imperialism as one of subjugation and extraction. These movements coalesced around a bottom-up vision of Philippine society untainted by elite associations with Western powers.

Of course, this is a phenomenon not necessarily unique to the Philippines. One need only look at other Asian states such as Burma (now Myanmar) or Vietnam to see how local constructs of class, caste, and social hierarchy permeated the imperial structures around them. Yet, the salient difference between such states and the Philippines is that this narrative has never truly been challenged in the archipelago. The dynastic elite that dominate the political life of the islands remains unchanged to this day, reminiscent of the structures of authority cultivated under Western imperialism. Where nations like Vietnam have experienced profound revolutionary change, the internal hierarchies of Filipino society have remained remarkably static, even during periods of political turmoil like the People Power revolution. Moreover, for those regions like the Korean peninsula or South Asia, superpower interest has ebbed and flowed between the periphery and core of strategic interests. The Philippines has never experienced this disparity, given its consistent centrality to American engagement with Asia. As such, the narrative of Philippine nationhood remains predicated on Americanised visions of good governance, and cultural representations of the islands remain embedded within a bi-national framework. One need only read the descriptions of the archipelago put forward for observers – a ‘land apart’ from Southeast Asia, a place where East meets West – to see the sense of dichotomy that underscores the islands’ identity as a sovereign state.

In this sense, the story of America’s decolonisation of the Philippines offers salient lessons for understanding the contemporary relationship between the two nations, where an atmosphere of conviviality can often be punctured by reminders of America’s imperial legacy. Indeed, as President Trump made his triumphant landing in Manila for the Association of Southeast Asian Nations (ASEAN) conference in November 2017, he was greeted by an unruly throng of protesters, who took issue with the President’s visit and the imperial dynamic it represents. This sense of dichotomy between the Philippines and United States is something that will undoubtedly continue to be tested in the future, despite both Duterte and Trump looking to break the traditional strictures of their office and present themselves as fundamentally apart from the administrations that preceded them. Still, one thing is for certain, the Philippine-American relationship remains as fractious as ever.

Elliot Newbold is a PhD candidate in the Department of American & Canadian Studies at the University of Nottingham, UK, and a two-time recipient of the Institute of Asia & Pacific Studies (IAPS) Tomlinson Scholarship. He also works as an editor at the IAPS Dialogue blog, where he often contributes articles. He tweets @enewbold1992. Image credit: U.S. Department of State/Flickr.