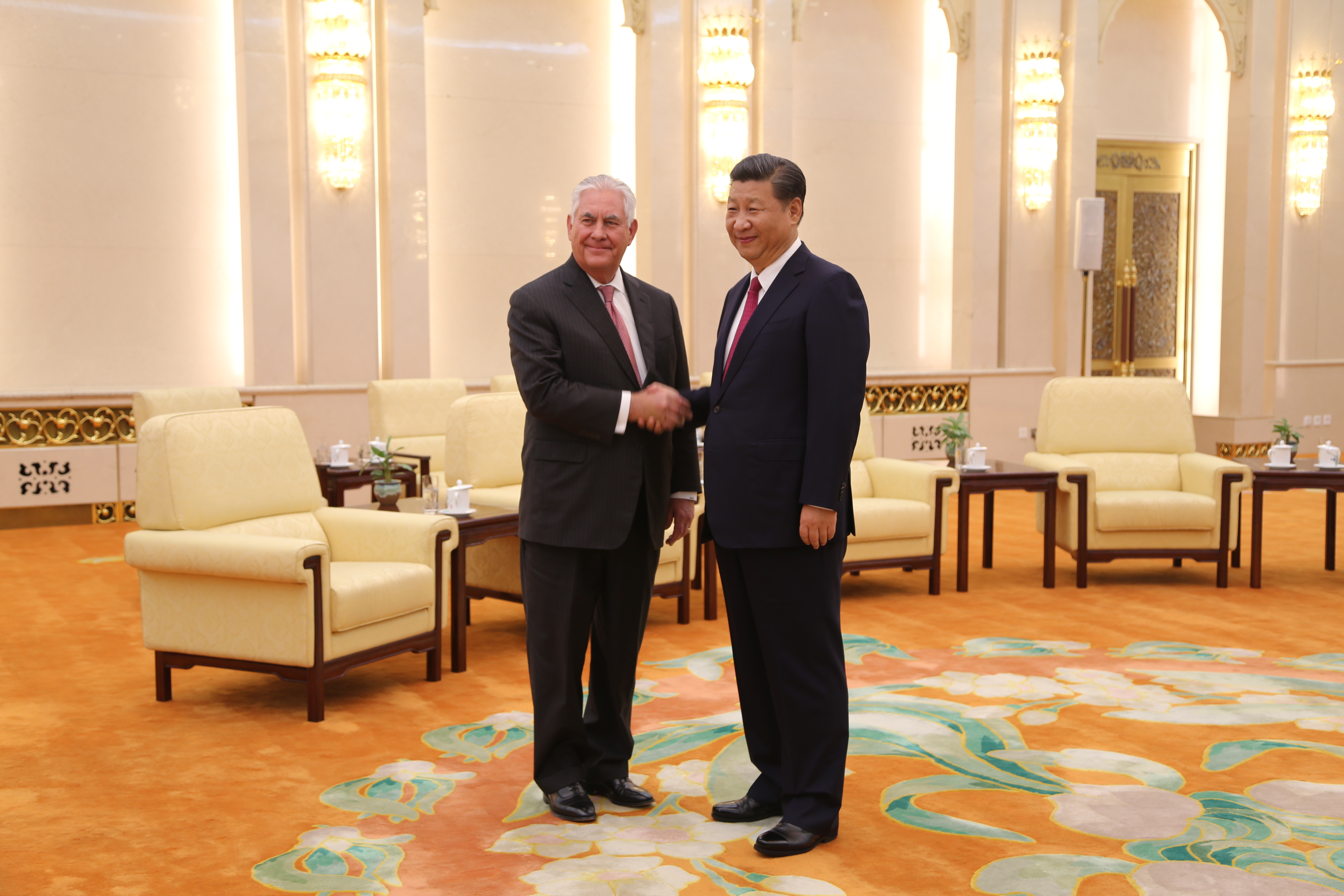 The China-watching punditry has been aflutter since the not entirely unexpected announcement on Sunday that China was dropping the term limits for president, a move that would conceivably open the door for President Xi Jinping — arguably the most powerful Chinese leader since Mao Zedong — to stay in office indefinitely.

This development, which has already prompted parallels with Russia’s persistent autocrat Vladimir Putin, has led some to argue that that Emperor Xi, as some now dub him, would use the extra time accorded him by the constitutional change to further consolidate the power necessary to tackle endemic corruption and push economic reform. Others of a more pessimistic inclination see this as a power grab that will lead to greater repression inside China, which under Xi has already reached levels unprecedented in decades, and a higher likelihood that China will flex its muscles to grab territory in the East and South China Sea, as well as the top real-estate prize — Taiwan.

All of this, of course, is conjecture. For all we know, President Xi could still decide to not walk through that door come 2022 and to allow for a successor (presumably hand-picked) to take the helm, with Xi, a power behind the throne as Putin was to Dmitry Medvedev, remaining as Chinese Communist Party (CCP) chairman. What the constitutional change has done is to make it possible for the president to remain in office beyond two five-year terms.

Now admittedly the signs are not quite positive. In recent years President Xi has accumulated tremendous power by seizing control of all the key state and party institutions, a concentration of power that hadn’t been seen in decades and which the last time it lay in the hands of a single individual resulted in a series of catastrophes and millions of victims. President Xi has used various tactics, the anti-corruption campaign chief among them, to rid himself of his opponents within the factionalised CCP, and in doing so he has undone the rule-by-consensus instated by Deng Xiaoping in the wake of the Mao nightmare. He has also encouraged, or at the very least countenanced, a cult of personality that also hadn’t been seen since Mao, transforming him into a quasi-religious figure with global reach.

Whether due to simple thirst or a paranoid mindset, President Xi wants power, and following Sunday’s announcement his has now become nearly absolute. As Lord Acton once famously said, “Power tends to corrupt, and absolute power corrupts absolutely.” At some point in a dictator’s life, power ceases to be the transmission belt for the achievement of great things and becomes an end in itself. It is when the durability of this power becomes threatened — by rivals, civil unrest and so on — that the tyrant becomes the most dangerous.

Again, we can only speculate and such scenarios need not become reality. As some of the more positive observers have argued, a Xi permanently installed in the presidency ensures continuity. Better the devil that we know, they say, than the uncertainty of whatever might come afterwards.

Be that as it may, from a systemic perspective Sunday’s development is arguably a negative development in China’s history, a return to ancient traditions of the Mandate of Heaven that, for all its mythical attraction, also contributed to tremendous instability. The key problem is that the constitutional change dispenses with a mechanism which, although certainly not democratic, at least imposed limits on what a leader — any leader — could accomplish. While ambitious leaders like Xi ostensibly regard such temporal limitations (two five-year terms) as an impediment, this rule nevertheless ensured a modicum of stability by providing the institutional means to channels for discontent. If a leader, his chosen successors, or a faction within the CCP hadn’t performed well, they could be “punished,” in a way that is perfectly understandable in democracies what with the regular holding of elections, in the next power transition. The fact that power transition were institutionalised and regular meant that opponents of a candidate could use their influence within the consensus-building system to ensure a favourable outcome (to them). In other words, regular power transitions — or the period leading up to that point — provided the occasions for various forces and factions within the CCP to hash it out, to vie for influence, and to back their candidates.

With the removal of this process, the means by which discontent and ambitions can be expressed would seem to have disappeared. We already know that President Xi, notwithstanding the odes and adulation, more feared than he is loved and that he has made several enemies since his ascension to power. While prior to the constitutional change his enemies could have decided to lie low and wait it out until 2022, when Xi’s second term was to end, they now face the possibility that he could remain in power indefinitely. The same, by the way, holds for the more extreme factions within the People’s Liberation Army (PLA), who have been impatient with the current leadership and may want the Chinese military to do more. Whereas in the past the PLA could have used its sizeable influence to propel a candidate they regarded as more amenable to the armed forces’ ambitions, that channel also may have been closed with the constitutional change.

And finally, there is the Chinese public itself, which as always has had no say in the matter. As with CCP factions and the PLA, ordinary Chinese could also, prior to the constitutional change, look to the next power transition with hope that whoever emerged as the next leader would have the wisdom and ability to improve their lot — from powerful capitalists to labourers in the remotest and poorest parts of the country. Although democratic channels, the ability to directly elect their own leaders, was not an option given to them, the system nevertheless provided some hope of improvement every five or ten years through the regular changing of the guard. That option may no longer exist, and this has sparked much criticism among ordinary Chinese since Sunday. What with contradictions in the Chinese economic miracle piling up on a mountain of debt, it is uncertain how much longer President Xi will continue to enjoy the kind of economic growth that has largely contributed to the CCP’s status as the indispensable variable in contemporary China. If the economy takes a turn for the worse (so far it has defied all predictions, but whether it can do so indefinitely is debatable), the Chinese public’s willingness to go along with the CCP’s program, or at least with the program proposed by the president, could rapidly dwindle. With no prospects of a leadership replacement, that loss of support could spell trouble for the leader, who, given President Xi’s proclivities, would likely respond with the fist of repression.

Constitutional amendments that give greater powers and more time to a leader may make sense when a leader is doing the right things and contributes to the betterment of the nation. The true sagacity of a constitution, however, lies with the provisions it makes, and the checks and balances it imposes, for the future, with enough foresight to know that things will not go well indefinitely. That, arguably, is the blind spot in the constitutional changes announced on Sunday, made in a time of hubris when China’s ascendance — now mythically twined with President Xi’s occupying the throne — seems unstoppable.

By closing those channels and possibly extending a leader’s rule indefinitely, the constitutional change increases the odds that discontent and impatience — within the CCP, the PLA and the general public — will find other means of expressing themselves. Absent other mechanisms, outliers who can no longer countenance the status quo will be compelled to choose more drastic means of countering the leader. And more often than not in a dictatorship this means a coup d’état, a crisis that would plunge China — and possibly the region — into great instability, with a high likelihood that the military would assume power.

Of course a wise leader, even one empowered by a constitution that does not impose temporal limits on his rule, would choose to abdicate before instability had a chance to descend into such a crisis. Unfortunately, based on his track record to date, there is little reason to believe that President Xi has such wisdom.

Michael Cole is a Taipei-based senior fellow with the China Policy Institute and the Taiwan Studies Programme at the University of Nottingham, UK, an associate researcher with the French Centre for Research on Contemporary China, and chief editor of Taiwan Sentinel. Image Credit: CC by U.S. State Department/Flickr.

Should India amend its nuclear doctrine?
China, Cuba, and the United States: Intersections and divergences