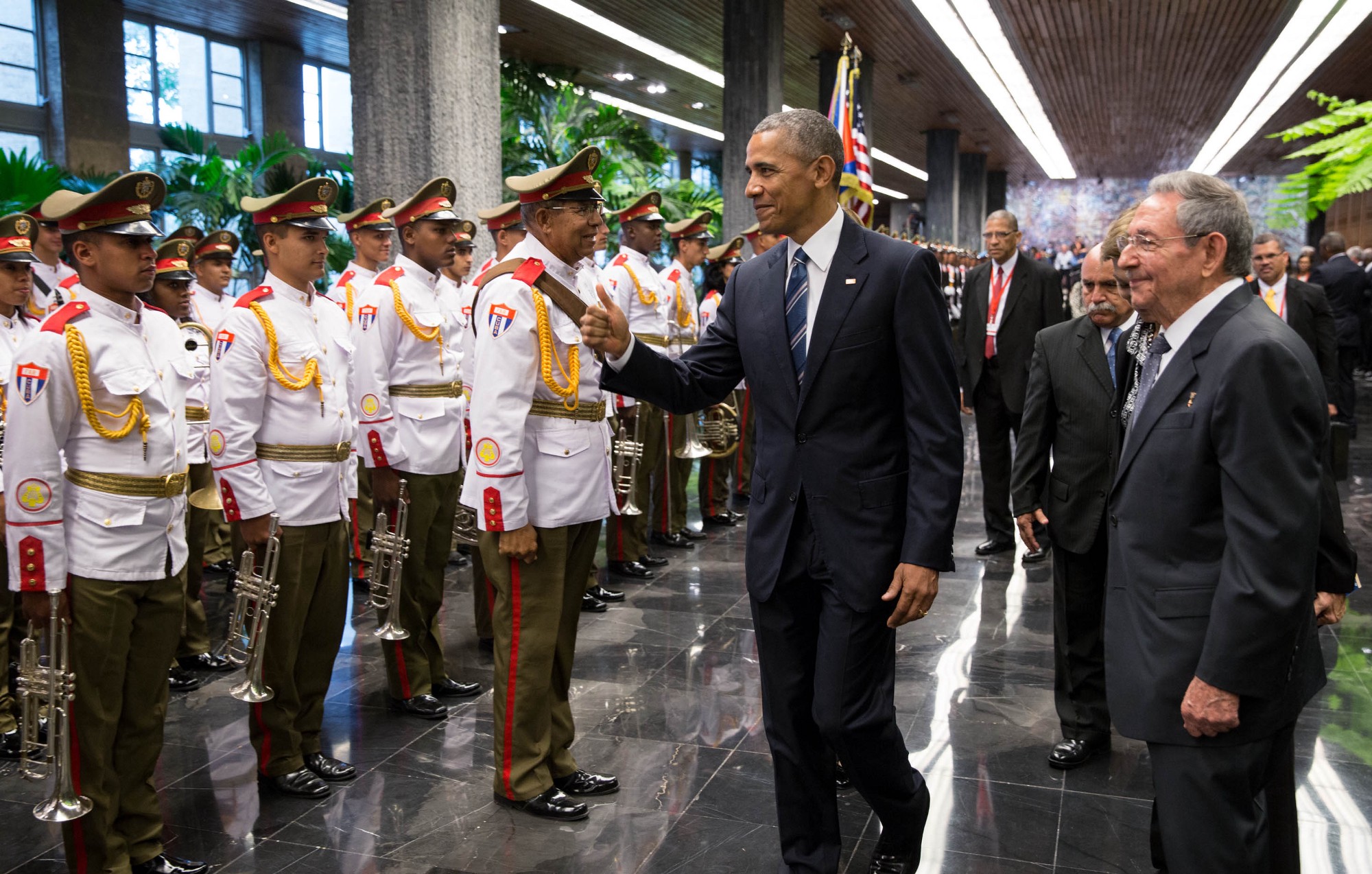 Cuba established diplomatic relations with the People’s Republic of China in 1960 – the only country in the Western Hemisphere to do so, as the others succumbed to U.S. pressure against recognition. But by 1966 one could have described the relationship, at best, as hostile. President Fidel Castro told a small group of scholars at a 2002 meeting that he had opted to move closer to the Soviet Union rather than China for a simple reason. “The Soviets had oil,” he asserted bluntly. In fact, the choice was inevitable, because China neither wanted a close relationship nor trusted Cuba. From 1975 to 1988, the two countries even clashed in southern Africa, as Cuba supported the Angolan government with thousands of troops and China – along with South Africa and the United States – backed UNITA, the main armed insurgent force against the government.

However, relations began to improve in the early 1990s as Cuba’s loss of support from the defunct Soviet Union created a “special period” of suffering on the island. Oil imports dropped by 85 percent and China helped to fill the transportation void on the island by sending 500,000 bicycles to Cuba. In 1997, China set up a bicycle factory that became a model of training and the transfer of technical skills to Cubans in subsequent production facilities.

At the start of the new century, Cuba’s need to attract capital and diversify its partners complemented China’s increased focus on Latin America as a locus of investment. By 2011 China had become Cuba’s second-largest trading partner and the island was China’s largest partner in the Caribbean. The two countries pursued state-led cooperation in diverse sectors, including biomedicine, tourism, industrial manufacturing, nickel, and oil mining and refining. On two visits to Havana (2004 and 2008), China’s President Hu Jintao signed trade and investment agreements, including the formation of a joint venture to exploit Cuba’s nickel reserves, the fifth-largest in the world. In addition, President Hu extended the deadline for repayment of Cuba’s loans, and provided a donation for hurricane relief and a credit line of US$70 million for health infrastructure. In 2012, when Cuba’s President Raúl Castro made his first trip to China as head of state, he signed agreements for new zero-interest loans, the import of television equipment, and Chinese Export-Import Bank funds to upgrade medical facilities in Cuba.

The pace of cooperation between Havana and Beijing actually accelerated after Presidents Castro and Barack Obama announced in December 2014 that their two countries would be normalizing diplomatic relations. When asked about the impact of improved U.S.-Cuba ties on Chinese-Cuban relations, China’s Foreign Ministry called it “a good thing,” adding that “China and Cuba have long enjoyed friendly and mutually beneficial cooperation. We will deepen our relations with Cuba, and this does not target nor affect any third party.” Notably, in 2016, China replaced Venezuela as Cuba’s top trading partner. According to the Cuban National Office of Statistics, total trade between the two countries reached US$2.6 billion, more than 60 percent above the annual average of the previous decade.

Declining oil exports, in part, account for Venezuela’s drop to second place among countries with which Cuba trades. Still, Cuba’s absolute level of trade with China increased in the last decade. New Chinese sales have included Yutong buses and YTO tractors, and the development of a US$500 million golf resort. In 2017 alone, the two countries initiated several bilateral projects. Chinese funds enabled Cuba to start building its first utility-scale renewable energy project, a biomass plant. Air China, which has operated in Cuba since 2015, opened a commercial office to promote tourism and travel. China and Cuba also launched a project to produce silk for the biotechnology, biomedical, cosmetics and textile sectors. Chinese communications firms stand out among those most eager to build-up Cuba’s underdeveloped infrastructure. For example, Huawei has established its presence on the island by building facilities to increase internet penetration through Wi-Fi hot spots and home services.

Cuban and Chinese officials have been meeting annually since 1988 in a forum named the Cuba-China Intergovernmental Commission for Economic and Commercial Relations. During the 29th session of the Commission, in June 2017, Cuba’s Minister of Foreign Trade and Investment Rodrigo Malmierca announced that Cuba had begun to base international financial transactions on the yuan. After the damages caused by hurricane Irma in the autumn of 2017, Malmierca and China’s ambassador to Cuba Chen Xi signed five new accords to support the recovery process. The agreements included a donation of US$1 million by the Chinese government and a new credit line to remodel and modernize Cuba’s electronic industry.

The linkages between Cuba and China extend beyond economic relations. In June 2017, Li Yufu, First Secretary of the All-China Federation of Trade Unions (ACFTU), held meetings in Havana with his Cuban counterpart at the Federation of Cuban Workers. Subsequently, the president of Cuba’s National Assembly, Esteban Lazo, led a delegation of Cuban parliamentarians to several Chinese provinces. In January 2018, the Chief Director of the Chinese Communist Party’s International Relations Department met with President Castro in Havana. In serving as the personal envoy for President Xi Jinping, Song Tao’s trip was intended to convey the importance of Cuba’s ties to China, by communicating in a direct way the significance of measures that the 2017 Chinese Communist Party Congress adopted.

Chinese culture – reflected in the celebration Chinese Spring Festivals, the creation of several Confucius Institutes, and martial arts exhibitions – also has become an integral part of Cubans’ daily life. The 2018 Havana Book Fair was dedicated to China as the guest country. During a meeting with the Chinese delegation, Cuba’s First Vice President and likely next President, Miguel Diaz-Canel, lauded the state of Cuba’s relationship with China and emphasized the importance Cuba assigns to extending commercial, scientific and cultural exchanges with China.

The United States would seem to be the natural trading partner for Cuba, and President Obama began to break down the barriers standing in the way of this possibility in 2015 and 2016. He made travel to Cuba easier for U.S. citizens, removed Cuba from the State Department’s list of state sponsors of terrorism thereby reducing some obstacles Cuba faced in making international financial transactions, and permitted the FDA to begin a review for the possible sale of a Cuban lung cancer drug. Cuba and the United States signed 22 cooperative agreements on issues ranging from the interdiction of drug traffickers to preparedness for natural disasters.

However, the U.S. Congress did not change any of the embargo laws that restrict trade and prevent a normal relationship from emerging, which made nearly all of the Obama administration changes susceptible to withdrawal by the next president. Indeed, President Donald Trump restored some restrictions on travel and outlawed commerce with any entity controlled by the Cuban military, which includes most export companies. President Trump’s hostile rhetoric also reinforced the position of those in Cuba who already had been wary of opening the door too readily to U.S. commerce – fearing the corruption of revolutionary values and the loss of Cuban identity and even Cuban sovereignty. Cubans do not have the same fears about engagement with China.

Cuba’s long history of hostility with the United States does not provide fertile soil for a burgeoning relationship, despite the potential offered by proximity and the Obama administration’s reforms. Whenever Cuba and the United States do begin the effort to rebuild trust, it will be a slow process. This means that as China deepens its ties to Cuba in the absence of U.S. engagement, the possibility that the United States could replace China’s role in Cuba becomes increasingly diminished.

Teresa García Castro is completing her Master degree in International Relations at American University (Washington, DC), and is a Research Associate for the Cuba Program at the Washington Office on Latin America.

Philip Brenner is Professor of International Relations at American University and the co-author of Cuba Libre: A 500-Year Quest for Independence (Rowman and Littlefield, 2018). Image credit: CC by White House/Wikimedia Commons