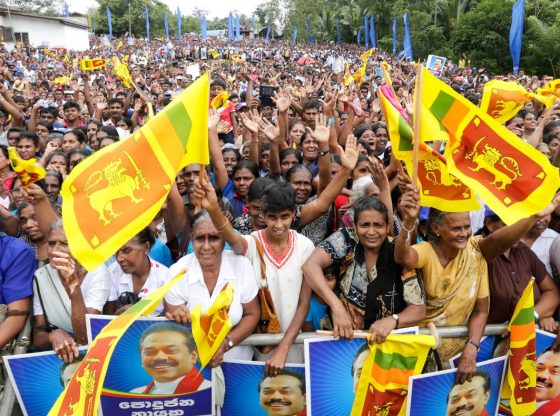 However, local elections were delayed for a longer period due to various reasons. According to the election commissioner of Sri Lanka Mahinda Deshapriya, 8326 local councillors have been elected from this election for 24 municipal councils, 41 urban councils and 275 Pradeshiya Sabhas (Local councils) which represent the third tier of the legislative body of Sri Lanka. Moreover, this year local elections were marked by guaranteeing 25% representation of women in each council, and also significantly, it is the first time Sri Lanka followed a mixed electoral model whereby 60 % of the members are elected by the first-past-the-post system and the rest through Closed List Proportional Representation.

In examining the election results, it is salient that Mahinda Rajapaksa upholds his tremendous popularity in the south of the island among the Sinhalese masses in the rural areas

Throughout the election campaign the two main political parties in Sri Lanka (The United National Party and Sri Lanka Freedom Party) were driven by the usual political slogans and the tactic of criticising one another. This was worsened when Maithripala Sirisenathe, the Sri Lankan president began to criticise his own Prime Minister Ranil Wickremaisnghe and his government for the Central Bank bond scam and for not investigating the alleged corruption charges of various figures in former president Mahinda Rajapaksa’s regime.

Somewhat ironically, none of the charges have been proven by law thus far which has given a sense of resentment to the masses in the rural heartland of Sri Lanka where the former president is regarded as an icon. More importantly the government’s lethargic or rather stagnant concern over the economic development in Sri Lanka has palpably caused a detrimental impact via the unexpected comeback of Mahinda Rajapaksa’s newly formed party against all odds.

The famous ‘’Nugegoda Rally’’ which was organised by Dinesh Gunawardena just weeks after former president Rajapaksa’s defeat as the presidential candidate brought a mass of people in support of the former president. This was the beginning of a comeback which garnered popular support. At the same time, the joint opposition in parliament led by Dinesh Gunawardena, galvanised the organisational factors to set the ground for the victory of the “People’s Front” in a heavy margin.

In examining the election results it is a salient factor that still, former president Mahinda Rajapaksa upholds his tremendous popularity in the Southern part of the island mainly among the Sinhalese masses in the rural areas. Rajapaksa’s newly established party “People’s Front “emerged victorious with  an overall average of 44.65% and secured the power of 249 local governing bodies out of 340. Current Prime Minister Ranil Wickramasinghe’s United National Party obtained an  average of 32.63% after upholding the power of 42 local governing bodies. Interestingly the party led by the current Sri Lankan president Maithripala Sirisena, experienced a crushing defeat.

Above all, the former president Mahinda Rajapaksa is not the leader or even a member of this newly established political party, Sri Lanka People’s Front. However, his open support of it in contesting the local elections of 2018 and his charismatic public façade appear to be the most obvious reasons behind the groundbreaking success of the party .

The results of the local elections held in Sri Lanka have demonstrated how rapidly political trajectory of the island can be changed. Another reason for this is that the coalition government in Sri Lanka which mainly consisted of United National Party and Sri Lanka Freedom Party, has not been able to address the fundamental social economic issues of the island though it has been three years since they came into power. Stagnation of Economy and the high inflation rate of Sri Lanka appear to have agitated the public opinion against the coalition government.

Besides those given factors, the Prime Minister’s reputation was marred by the infamous Central Bank bond scandal in which the he was accused of being a member of the guilty party and safeguarding the former Central Bank Governor of Sri Lanka, Arjun Mahendran, the man behind the single largest bank robbery in Sri Lanka.

Moreover, perhaps it would be fair to assume that the Sri Lankan government’s decision to take action against the provoking behaviour of a Sri Lankan Brigadier attached to the Sri Lankan High Commission in London in front of a protest organised by the Sri Lankan Tamil diaspora in Britain has caused a strong resentment amongst the Sinhalese majority towards the Government.

Whilst the external support received by the government in Sri Lanka from India and the West may play a pivotal role in securing the grip of power in the parliament, the outcome of the local elections in Sri Lanka has created a political storm

However, the victory of former President Mahinda Rajapaksa’s party cannot be entirely regarded as an overwhelming change in Sri Lankan politics though it has created some uncertainties in the island’s political sphere.

Strong Indian and Western support for the present government have been a known factor since the day President Maitripla Sirisena decided to run for presidential election in 2015 as the common candidate of the opposition against the powerful Rajapaksa. Even after the defeat of the Presidential Election in 2015 Mahinda Rajapaksa claimed that his defeat was planned by RAW agents in Colombo though New Delhi had denied such charges. As a matter of fact, it is certain that New Delhi shows a keen interest in defending the current government of Sri Lanka in a strategy to prevent Chinese presence in the island from growing stronger. The re-emergence of Rajapaksa’s power appears to be a setback to uphold Indian interest in Sri Lanka.

In this context, New Delhi as well as the U.S. will undoubtedly play their role in appeasing the coalition government in Sri Lanka. In fact, this was evident when Indian High Commissioner in Colombo Taranjit Singh met both President Sirisena and Prime Minister Wickramasinghe separately and left for New Delhi on the same day to meet Indian Foreign Secretary Vijay Gokhale. Furthermore, the United States ambassador Atul Keshap, met with President Sirisena when the election results were declared and paid lengthy attention on the current political situation.

It seems unlikely that the sudden rise of Rajapaksa will topple the existing government amidst its abrupt victory in the island’s politics. Mainly the Tamil, Muslim and even Christian minorities in Sri Lanka have moved away from the former president due to his more pro Sinhalese Buddhist Nationalistic image and this is made apparent by looking at the electorate which voted for the Sri Lanka People’s Front as they are largely dominated by Sinhalese Buddhist votes.

Nevertheless, whilst the external support received by the government in Sri Lanka from India and the West may play a pivotal role in the coming months in terms of securing the grip of power in the parliament, the outcome of the local elections in Sri Lanka has created a political storm in the island and it is still too early to predict how fervently it can disrupt the key political actors in Sri Lanka.

Eshan Jayawardena is a guest lecturer at the Open University of Sri Lanka. Punsara Amarasinghe is a Doctoral Candidate in International Law at National Research University, Higher School of Economics. This article was first published on the LSE’s South Asia blog and has been reposted with the permission of the editors. Image credit: CC by Mahinda Rajapaksa/Flickr.

Vietnam and India: A vital relationship in Southeast Asia
Why has Pakistan sent troops to Saudi Arabia?