Japan and India are challenging China in Africa

Home /India, Japan/Japan and India are challenging China in Africa 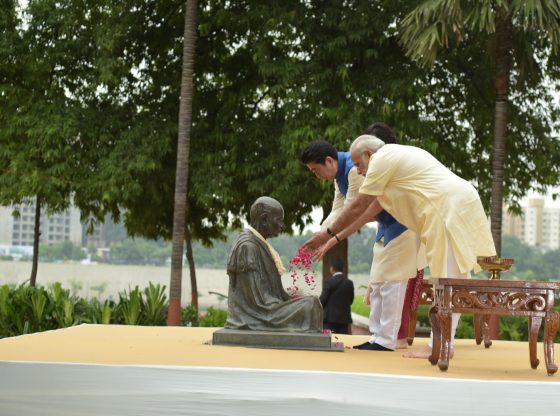 Japan and India’s strong bilateral networks are being channelled into Africa, where both countries are actively involved economically, politically and strategically. But the two are facing increasing challenges from their rival neighbour China, whose fat purse and growing influence in Africa are difficult to match individually.

The 52nd annual African Development Bank meeting held in May 2017 in the Indian state of Gujarat — Prime Minister Narendra Modi’s home state — was a landmark event, as it was the first time India had hosted the conference since it joined the Bank in 1983. An important development proposed was the establishment of an Asia–Africa Growth Corridor in which India and Japan would partner in African development. A vision document unveiled at the meeting was prepared by Japanese and Indian think tanks in consultation with African think tanks.

This document had been commissioned after the Modi–Abe summit meeting in Tokyo in November 2016, where the two leaders stressed the need to improve connectivity between Asia and Africa, regarded as vital to achieving prosperity in the wider Indo–Pacific region. The 30 page vision document identifies four specific areas in which India and Japan can cooperate in Africa: enhancing capacity and skills, quality infrastructure and institutional capacity, development and cooperation projects, and people-to-people partnership.

Japan and India’s joint regional projects are being strategically implemented in the background of China’s increasing footprint in the African continent, made through its massive aid, trade and investment.

Both India and Japan are sizeable investors in Africa and their economic aid has increased significantly in recent years. Both are also committed to doing more in Africa. Rather than simply contributing individually, they see better prospects for African development through a partnership.

In modern history, India’s links with Africa go back to the early 20th century, when India was an active supporter of African independence and anti-colonial movements. India has a vast diaspora in Africa that originated in the British colonial period. These Indians maintain close contact with their home country through visitations, remittances, trade and investment. India has utilised these resources to its advantage in building networks with the African continent. In more recent times, India has engaged Africa through the India–Africa Forum, which was established in 2008.

Japan’s links with Africa are more recent and focus on aid and investment. Japan was a pioneering Asian nation in establishing a Japan–Africa forum in 1993 through the Tokyo International Conference on African Development. While Japan’s technical superiority, experience in aid delivery and quality infrastructure projects remain unmatched, Japanese ambassador to India Kenji Hiramatsu has stated that Japanese companies are making moves ‘to utilise the personnel networks developed by India to make inroads into Africa’.

Japan and India’s joint regional projects are being strategically implemented in the background of China’s increasing footprint in the African continent, made through its massive aid, trade and investment. This is not to mention the grand strategic design that is the Belt and Road Initiative, with large infrastructure projects through land and maritime routes covering Africa, Asia and Eurasia — an endeavour which both India and Japan view with suspicion.

Japan has not joined the China-led Asian Infrastructure Investment Bank, just as India did not send official representatives to the Belt and Road Forum in Beijing in May 2017, an event regarded as ‘the biggest celebration of China’s rise as a great power since the Beijing Olympics in 2008’. Japan and India’s absence in these leading initiatives and events, which have attracted otherwise global attention and participation, confirm their deep misgivings about China.

India and Japan have strong bilateral economic relations with China, but both also have unresolved territorial issues and strategic tensions with the regional giant. They mistrust China’s political, economic and military projects in Asia and around the world. In this prevailing environment of tension and mistrust, Japan and India have embarked on a new competition with China — and they have chosen Africa as their playground which may have unintended consequences in the shifting power structure currently underway in the Indo-Pacific region.

Purnendra Jain is Professor and Head of Asian Studies at the University of Adelaide. This article was first published on the East Asia Forum and can be found here. Image credit: Indian Ministry of External Affairs/Flickr/

Why has Pakistan sent troops to Saudi Arabia?
How will India contend with China’s growing power?