From Sputnik to Space X: politics and space revisited 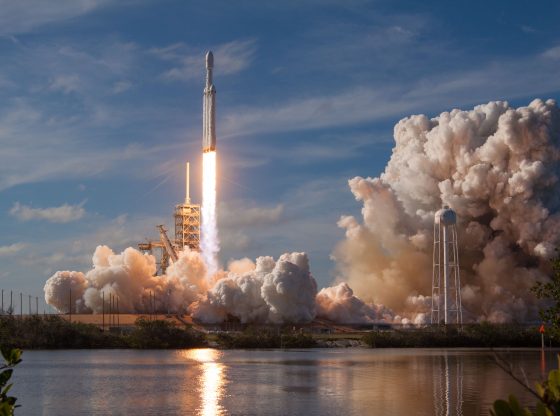 On February 6, the Falcon Heavy, dubbed as “the world’s most powerful rocket” successfully completed its maiden flight, demonstrating that it can carry a payload of 64 metric tonnes. The equivalent of ten large elephants, it ushered in a new era for space exploration – Delta IV, the rocket with the largest existing capability could carry less than 50 percent than Falcon Heavy and cost around 300 percent more.

Standing at imposing 230 feet with a diameter of 12 feet, the Falcon Heavy represents a spectacular engineering feat. Space exploration has perennially grappled with two critical factors: high expenditure and low payload. Elon Musk, the maverick billionaire scientist who gave the wings to the Falcon Heavy seemed to have overcome these at one stroke.

India and China compete for the lucrative and growing market for satellite launches and their strategic competition in the realm of power-politics is being mirrored in their space endeavours.

The significance of outer space (henceforth space) as a domain has magnified in various aspects; from civilian to military, scientific and commercial, as a spectrum of devices and services ranging from mobiles to missiles, navigation to banking, are irreversibly dependent upon it. Likewise, galactic developments are seldom divorced from global dynamics; hence the need to examine space exploration in tandem with the world order. This article explores the intersection between global politics and space exploration and compares and contrasts the developments of the twentieth century with those of the twenty-first.

The Space Age dawned with the launch of Sputnik, the world’s first artificial satellite by the Soviet Union on October 4, 1957; although the V2 rocket developed and deployed by Nazi Germany in 1944 holds the distinction as the first artificial object to travel to space. With the Cold War underway, the perceived loss of face from its primary competitor spurred the United States towards space research. NASA, established in 1958, developed its Apollo program which accomplished the feat of landing the first man on the moon: astronaut Neil Armstrong in 1969. Outer Space, both as a global common and an arena of great power competition and power-projection, epitomizes the ultimate frontier where the concurrent reconfigurations of world order and technology challenge conventional ideas and institutions. The bipolar world order, despite episodes of intense rivalry, offered possibilities of managed stability and limited cooperation, and existing rules regulating space such as the Outer Space Treaty (1967) and subsequent ancillary agreements prioritizing cooperation over conflict illustrate this.

Nevertheless, these arrangements are rendered progressively archaic by the transforming power dynamics of this century. Technological advances and national ambitions continue to increase the number of countries with orbital launch capacity: eleven at the moment and growing. Integral to the scenario is the power transition which heralds a departure from the past since rising powers like China and India espousing multi-polarity and boasting exemplary space programs are inclined to either confront or compete in the cosmos as the locus of global power steadily shifts from the West to the East.

The only country apart from Russia and USA to possess manned spaceflights is China. In 2007 it conducted an anti-satellite test – using a missile to target one of its defunct satellites. This prompted the US to conduct a similar test in 2008. Great power politics in space has therefore resumed. Hailed as a pioneer of societal applications of space technology, the Indian space program is characterized by unique economical and innovative features. Hosting the world’s largest fleet of civilian remote sensing satellites, the Indian Space Research Organization has garnered attention in recent times by its successful maiden inter-planetary Mars Orbiter Mission (2013), achieved at a fraction of the cost of similar ventures and by launching a record 104 satellites from a single rocket (2017). Last year India launched the South Asia satellite providing free services for South Asian countries as a gesture of goodwill and regional diplomacy. India and China compete for the lucrative and growing market for satellite launches and their strategic competition in the realm of power-politics is being mirrored in their space endeavours.

International Relations in this century has witnessed the proliferation of non-state actors and space is not free from this trend as SpaceX – the producers of Falcon Heavy – testifies to. The interplay between the emerging powers and the parallel emergence of non-state actors like SpaceX contributes to the complexity of regulating space. The increase in the number of actors decreases the prospects of effective cooperation. Although space is universally upheld as an arena for peaceful purposes, powerful actors typically jostle for comparative advantages.

Commercial entities had hitherto offered satellite-enabled services such as remote sensing and imaging at competitive terms or contributed to space research and development, but they remained largely circumscribed by national space agencies; SpaceX has upset the apple cart with Falcon Heavy establishing itself as a preeminent actor in space. If the twentieth century witnessed a space race between two superpowers, then human activities in space in the twenty-first century will be acute and arduous, driven by two principal factors; the proliferation of actors in space both within and beyond the state, and the increasing reliance of modern society on space technology respectively.

Although commercial entities have typically supplemented national space efforts until  now, the precise role of national space agencies vis-à-vis non-state actors cannot be predetermined. It can however be safely predicted that the nexus between state and non-state actors will defy simplistic and linear formulations. Further the globalized economy being pivotal on increasing interconnectivity, propelled by commercial interconnections and amplified speed of travel facilitated through high bandwidths of the internet and precise navigation systems (e.g. the GPS); these and a spectrum of allied services are anchored in space through satellites. In essence, space has emerged as a crucial element of infrastructure and a catalyst for economic development which affects agriculture, meteorology, communication, resource management, disaster mitigation among others.  As a growing gamut of human activities is increasingly interconnected with developments in space, access to, and the terms of the utility of space-based-applications are crucial. The success of SpaceX has widened the range of possibilities. Falcon Heavy may be a big step for space exploration, but an uncertain leap for the world?

Turkey-Taiwan relations: Opportunities and limitations
The development of football in China under Xi Jinping