The Indo-Pacific: An emerging vision of Asia’s future 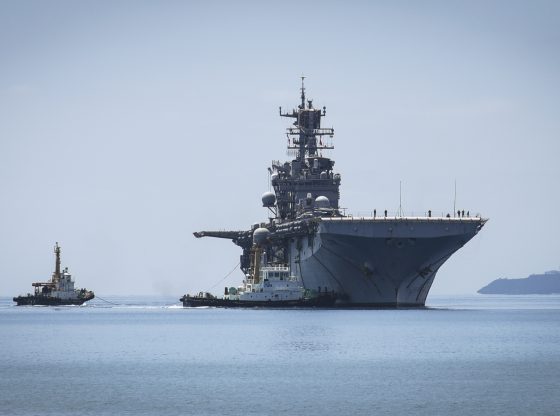 Amidst the massive churn currently taking place in the administration of Donald J Trump, Alex Wong, Deputy Assistant Secretary of State for East Asian and Pacific Affairs, gave an on the record briefing with regard to the U.S. strategy for the Indo-Pacific, on April 3, 2018, (a day before a trilateral dialogue took place between senior officials from India, Japan and US).

During this briefing, Wong outlined the contours of the United States’s strategy, and spoke not just about the Trump administration’s geo-strategic vision, but also regarding Washington’s wider economic vision.

A backgrounder to the Indo-Pacific

Under successive administrations, the U.S. has referred to the region as the ‘Asia-Pacific’ (which China prefers incidentally). It is thus notable that the current Trump Administration has shifted the discourse and opted instead for the term ‘Indo-Pacific’.

During his visit to East Asia and South East Asia, in November 2017, the US President  used the term more than once (much to the discomfort of Beijing) and gave a brief overview of what he meant by a ‘Free and Fair Indo-Pacific’. While speaking to a business delegation at Asia-Pacific Economic Cooperation, Trump spoke about ‘rule of law’ and playing by the rules. Former Secretary of State Rex Tillerson had referred to the Indo-Pacific and the Quad Alliance (consisting of US, India, Japan, and Australia) in an address at the Center for Strategic and International Studies (a Washington think tank)  in October 2017, a week before his India visit.

In order to give a further thrust to the Quad, representatives of all four countries met on the eve of East Asia Summit in Manila. A statement of the Indian Foreign Ministry said:

The discussions focused on cooperation based on their converging vision and values for promotion of peace, stability and prosperity in an increasingly inter-connected region that they share with each other and with other partners.

Before the members of the Trump Administration began to use this term, former Australian PM Julie Gillard, during her visit to India in 2012, used this term, and the Joint Statement issued by both sides stated:

India and Australia share a common interest in the Indian Ocean and in the maintenance of stability and security through the Indian-Pacific region.

A 2013 White Paper on Defence released by the Australian Department of Defence also used this expression, as opposed to the earlier ‘Asia-Pacific expression’.

China has been dismissive of the ‘Indo-Pacific’ strategy, as well as the Quad alliance, saying both lack direction.

US statement on the Indo-Pacific, why India should be happy

If one were to look at the briefing by Alex Wong, there are clearly some points, which should make New Delhi happy.

First, he said that the term ‘Indo-Pacific’ captures the current realities better than ‘Asia-Pacific’. While commenting on the Indo-Pacific, Wong ‘acknowledge[d] that South Asia and in particular, India, play a key role in in East Asia and South-East Asia.’

Second, Wong, while praising the Modi administration, also spoke about a larger role for India in the Indo-Pacific. Emphasizing on it’s democratic credentials, Wong made the point that:

While categorically stating that the emphasis of ‘Indo-Pacific’ was on ‘free and open’, Wong also made the point that this strategy was not aimed at China, and that ASEAN and India put together are much larger than China.

Precise contents of the strategy

Commenting on what exactly the US meant by a ‘free’ Indo-Pacific, Wong said:

By free we mean, first of all, the international plane. We want the nations of the Indo-Pacific to be free from coercion, that they can pursue in a sovereign manner the paths they choose in the region, .. Secondly, we mean at the national level, we want the societies of the various Indo-Pacific countries to become progressively more free – free in terms of good governance, in terms of fundamental rights, in terms of transparency and anti-corruption.

Expanding on what the US means by ‘open’, Wong said:

Secondly, we mean more open logistics – infrastructure. There’s an infrastructure gap throughout the Indo-Pacific. What is needed throughout the region to encourage greater regional integration, encourage greater economic growth? We want to assist the region in doing infrastructure in the right way, infrastructure that truly does drive integration and raises the GDPs of the constituent economies, not weigh them down, …We also mean more open trade. Free, fair, and reciprocal trade is something the United States has supported for decades and that the Trump administration supports.

India and other members within the Quad will welcome the articulation of this vision. The fact that the Indo-Pacific narrative has gained momentum is evident from the recent trilateral meeting between US-Japan and India, where representatives of all three countries agreed on giving a further fillip to greater cooperation.

A focus on economics and connectivity

The Indo-Pacific narrative has also begun to focus on the economic as well as the geo-strategic. During Malcolm Turnbull’s meeting with Trump, there was a discussion on connectivity between Quad nations. While no specifics were discussed during the course of this meeting, The Trilateral Infrastructure Working Group (India, Japan, and US), which met in Washington DC in February 2018, also sought to come up with a coherent alternative to the ‘One Belt One Road’ project.

During the 9th trilateral meeting of senior Indian, Japanese, and US officials, not only was there an agreement with regard to a free and open Indo-Pacific, but also to review the key outcomes of the February 2018 meeting, and also sought to find ways through which connectivity can be enhanced.

A statement released after the meeting between officials of all three countries stated:

[We have] explored practical steps to enhance cooperation in the areas of connectivity and infrastructure development; counter-proliferation; counter-terrorism; maritime security, maritime domain awareness and HA-DR (humanitarian assistance and disaster relief).

Whilst the US talks about an ‘Open’ Indo-Pacific, Trump’s insular economic policies embodied by the US exiting from the Trans Pacific Partnership (TPP), have placed key US allies like Japan and Australia on the back-foot diplomatically. Indeed many would argue that China has benefited the most from Trump’s decision to exit from TPP.

Tariffs imposed by the US have not just  impacted China, but allies like Japan. Similarly, his approach on H1-B visa issues is a major obstacle to better ties with India. Indian companies have reduced their filing by nearly 50 percent. Apart from this, the Trump administration’s policies have also led to a dip in the number of Indian students enrolling in graduate programs of computer science and engineering.

While there has been mention of the economic component and an emphasis on greater connectivity, the US has been slow so far to keep pace and needs to accelerate projects like the Indo-Pacific Economic Corridor, an idea proposed by previous Secretary of State John Kerry, but has not witnessed much progress on the ground. Given Trump’s transactional approach on security issues, even towards allies like Japan and South Korea, it remains to be seen how far he goes with regard to assisting big ticket infrastructural projects in the Indo-Pacific.

If Indo-Pacific connectivity projects are to be effective, it is important for some big ticket projects to take off on the ground.

India and Japan have taken the lead

During Shinzo Abe’s visit to India in December 2015, India gave its unequivocal commitment to work closely with Japan in its ambitious vision ‘Partnership for Quality Infrastructure (PQI). Both sides resolved to explore synergies between New Delhi’s Act East Policy and Japan’s PQI. The US and Australia need to now join India and Japan so that this partnership becomes more effective.

If one were to look beyond symbolism and acronyms, then there is space for Vietnam, which already has close strategic ties with countries in the Quad, to work not just individually but collectively on connectivity projects.

While India has already spoken about extending the India-Myanmar-Thailand highway into Vietnam (Government of India is in talks with ASEAN), and Japan too is working on important infrastructural initiatives, the US and Australia need to step up their efforts to get Vietnam on board as an important stakeholder in terms of connectivity. Trump had articulated this vision during his November 2017 visit, but the results need to show on the ground; perhaps the best bet would be to push forward the Indo-Pacific Economic Corridor vision, positioning Vietnam as an important player.

It remains to be seen how his new team, including John Bolton, approaches this issue. In the past, there have been major differences between Bolton and New Delhi. The incoming National Security Adviser has been skeptical of India. In addition to this, if Bolton too is excessively isolationist like Trump, it is not good news for the Indo-Pacific strategy.

The US President needs to give greater importance to the State Department in order to take forward such a complex vision. While using an expression is one thing, to achieve something tangible in areas like connectivity, there is the need for an effective and efficient bureaucracy. There has been a drastic reduction in State Department’s budget under Tillerson, and this certainly is not good news.

The emergence of the Indo-Pacific as a geo-strategic concept is a welcome development. However, it needs further diplomatic movement and there needs to be greater clarity on economic issues, and above all else, predictability on the part of the United States.

Countries like Japan and Australia will play an important role in bolstering economic linkages and connectivity. New Delhi on its part should work closely with Japan and Australia, while also seeking to strengthen linkages with Vietnam. The US view about granting India a key role is good news for New Delhi, but if there are no significant achievements in terms of greater economic connectivity, these are mere platitudes and nothing else.

Tridivesh Singh Maini is a New Dehli based policy analyst associated with The Jindal School of International Affairs. He tweet @tridiveshsingh. This article was first published on the blog Notes on Liberty and can be found here. Image credit: CC by Naval Surface Warriors/Flickr.

Is China fast becoming a major force in A.I.?
A diplomatic challenge for New Southbound Policy