The legacy of colonialism in Bangladesh’s police 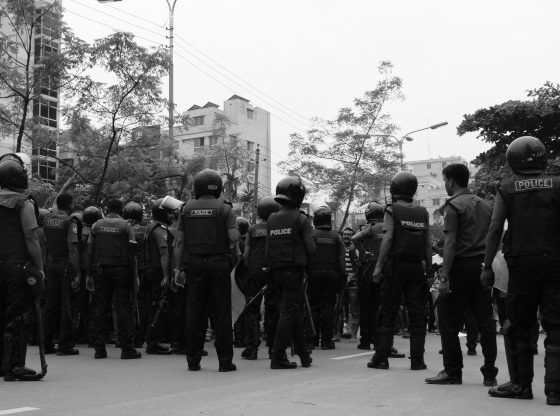 Bangladesh Police is the country’s primary law enforcement agency and is still guided by the basic principles of a colonial establishment, 70 years after the end of British colonial rule. Laws that were enacted at the height of the British Empire remain in effect today and control the police force. Colonial customs and traditions make it difficult for the police to look to the future – to become more ‘people-friendly’.

After the dissolution of the East India Company by the Government of India Act 1858, India became a part of the bigger global calculation of the British government. As such, governing and maintaining India became an important objective which led to the Imperial Police Service, India Law Commission, and Indian Civil Service. The primary reason behind these new mechanisms was to rule India as a colonial power.

In 1856, just before the dissolution of the East India Company, the Company Court of Directors noted that the established policing system failed to prevent crime. For this cause, the Court-commissioned Sir Charles Napier decided to model the Indian police force after the Irish Colonial Paramilitary Police. Thus the Police Act of 1861 came into being. The obvious power structure in this Act is that of a ruler and subjects, where subjugation remains the priority. Modern Bangladesh still uses Police Act 1861, Bangladesh Penal Code 1860, Code of Criminal Procedure 1898 and Evidence Act 1872 as laws of the land.

The long history of the Bangladesh Police force carries with it long-standing customs and traditions that became a part of the distinct culture of this force. Many of these traditions are based on colonial laws, such as the Police Act 1861 that governs the force and dictates their actions.

Established in 1912 in a rural village of Sardah in Rajshahi district, the Police Academy was and still is the premier training location of the Police force. The academy is steeped in colonial tradition: none so more prominent than that of the Officers’ Mess – the Barakuthi. An impressive Greco-Roman building built in the Bungalow style, it became closely associated with the senior leadership. The building houses lavish facilities in a very rural landscape complete with a billiard table and a grand dining salon. An important point to be noted is that none of this was for the ‘natives’. The first Indian was allowed in the Imperial (Indian) Police Service in 1921. The first Indian/native that dined at the grand table on the Officers’ Mess in Sardah was much later, no doubt.

Still today one can be taken to the distant highlands of Scotland with the Bangladesh Police Marching Bands playing on their bagpipes ‘Phule Phule Dhole Dhole’, a rendition by Rabindranath Tagore of the Scottish tune ‘The Banks O’ Doon’ written by Robert Burns in 1791. The uniform still consists of Scottish tartan, the famous coloured pattern, worn over their shoulders. Add the kilt and the band might as well be from the Regiments of Scotland marching around as they would have been during the British Raj.

Horse-riding by the ceremonial guard

Horses take an important place in Sardah training grounds as well as during ceremonial events of the State where Police lancers stage a wonderful display. The symbolism has not changed since the days of the 2nd Lancers, known as the Gardner’s Horse named after the Scotsman William Gardner who raised ‘a body of horse to carry out police and revenue duties’ in 1809. While horse-mounted Police no longer carry out regular duties in the country, their importance in ceremonies demonstrate how the symbols of the colonial past linger.

The marching training for the constables

Even until today, the Constables of the Police, comprising the majority of the force, are not trained in more than marching. Almost for the entirety of their training period of six months or more, the recruits march around the parade ground. One must wonder if this practice was not for the colonial times, when the image of the Police was a White man on the horse and the native constables following him on foot.

While these traditions or culture are merely symbolic and often impractical, some other colonial legacies present more difficulties. Rules and practices based on the Police Act create institutional barriers to moving forward from the colonial idea of controlling the people. Creation of classes within the police force is such a rule. There are three classes within the Police force – the lower Constables, the middle Inspectors, and the higher Superintendents. These classes within the members of the force dictate their actions and limitations. They also create an unchangeable hierarchical class structure within the force.

The Constables, who number the largest of the force, are not trained in the law and do not have the power to make arrests or do anything much other than complying with orders given by their supervisors – the Inspectors. The Inspectors, on the other hand, are the ones that do majority of the actual work to maintain the law and order and to provide Policing service to the population. The senior Superintendents of Police were designed to watch over their lower ranks within the force in order to monitor and guide them, but were not to participate in day-to-day policing work. This structure does not allow the Police to reform their ranks in order to best serve the needs of a modern Bangladesh.

In the colonial period it was important for the Police force to be embedded within civilian society in order to gather intelligence and suppress political uprising. Officers in the Police, especially the Superintendents, often held ex-officio positions on various boards, committees, governing bodies of civic and public organizations. This not only enabled them to know the activities of the organizations and their members but also to actively influence those organizations with the agenda of the government. This practice is still visible today, and Police officials are seen holding high ranking positions by virtue of their office in various organizations, especially cultural and sports associations. As such these public bodies are not truly free to do as they will.

Bangladesh Police today is comprised of many bright, intelligent and patriotic individuals who understand that even though they don’t lack in commitment, they face institutional mechanisms that deter them from providing a people-friendly service. Some of them have played leading roles in reform initiatives over the years but unfortunately most initiatives become stagnant after the recommendation phase. As time goes, the Police continues to be criticized for being an oppressive force, cracking down on the people but this cannot be overcome until the basic principles and law governing the Police force are updated to the modern time.

Asheque Haque is a security expert from Bangladesh. He is a graduate in South Asia and Global Security from King’s College London, and is an independent consultant on CVE. Image credit: CC from Wikimedia Commons/Redwoan Ahmed.

Taiwan–U.S. relations face a watershed year
Fake news? China’s base in Vanuatu and what it says about Australia