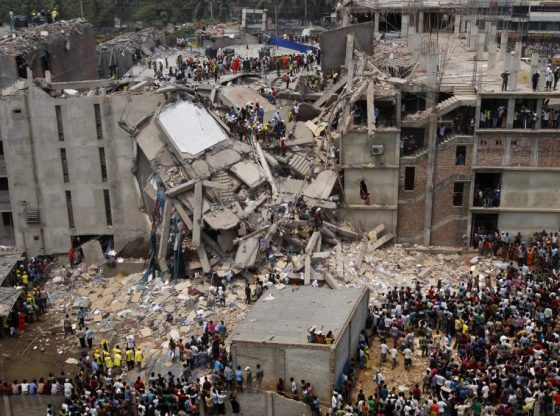 The shiny headquarters of the Bangladesh Garments Manufacturers and Exporters Association (BGMEA) – an organisation overseeing an industry that accounts for 82% of the nation’s exports and is projected to make £35.5 billion by 2021 – stands tall in the capital, despite neither conclusive proof of ownership nor approved building plan.

Fifteen miles  away and five years ago to the day, an eight-storey building lacking approval, constructed on land illegal obtained by then Awami League member of parliament, Towhid Jung Murad, for the party’s pet thug, Sohel Rana, collapsed under the weight of textile factories housed in it, despite it not being built for such a purpose. 1,135 of the workers who entered a building that had visible cracks throughout, for a measly Tk. 100.00 (£0.80) for a day’s work on 24 April 2013, were crushed to death. The survivors have spent the past half a decade in ever-diminishing hope of justice and the compensation they were promised.

This was not the first man-made tragedy visited upon workers. The domestic story of the textile industry in the second largest manufacturers of clothing in the world is one of the continued repression of workers.

Inspections were redoubled in the aftermath of the tragedy, but as the months passed, they became lax. Workers are coached, sub-contracting factories – such as the ones in Rana Plaza – are exempt, auditors transition to factory owners. Rana and the others indicted await full trials. However, seven labour activists arrested in January 2018 on questionable charges were sentenced to prison terms on 1 April 2018, unimpeded by the judiciary’s glacial pace. They had been apprehended by the Industrial Police – a branch of the force created especially to protect economic interests, i.e. suppress workers and serve the entrepreneurs.

Conceived when peaceful labour protests for a wage increase in 2010 became an inconvenience to the elite class, its work has included forcibly dispersing survivors who congregated at the site of Rana Plaza to pay respect to their lost colleagues on anniversaries of the disaster, and violently quashing the peaceful workers’ strike demanding a higher minimum wage in December 2016. Intimidation tactics include raiding labour organisations’ offices, meting out physical abuse to workers who cross the line, and the threat of enforced disappearance. The bar is set high for the Industrial Police. When the decomposing body of labour activist Aminul Islam was found on 6 April 2012, it bore torture marks that fit the modus operandi of the Rapid Action Battalion (RAB) – a British-trained paramilitary force comprised of the police and military, often operating outside the law.

The climate of fear under which labour activists operated was intensified by this murder. They have since curtailed their activities and censored themselves, but wage rises in Bangladesh have never been achieved without worker agitation forcing the mandated review every three years. While it bore fruit in 2010 and 2013 – the latter due to the Rana Plaza disaster putting the industry under heavy scrutiny – the Industrial Police’s successful drive prevented a similar outcome in 2016. Politicians and factory owners, often one and the same, keep labelling dissidents anti-state conspirators instigated by nefarious third parties. The minimum wage remains Tk. 5,300.00 (£44.73) per month – the lowest in the world – and the vast majority of workers continue to work without contracts and job security.

Myths about wages abound, propagated by owners who pose as expert commentators and women’s rights activists, the media, and economists at home and abroad. The first states that the benefits of growth in the industry and the GDP will lead to better pay. By the BGMEA’s own admission, the industry has grown exponentially in the past three decades, and GDP has grown steadily in the same period, yet workers’ pay has failed to keep pace, outstripped by inflation, augmenting wealth accumulation at the top. Pace this evidence, the disproven theory of trickle-down economics, born of unbridled capitalist greed, will evidently work in Bangladesh. Second, that workers get food, accommodation and medical benefits. The allowances for these are accounted within the Tk. 5,300.00, which is why workers are only able to live in slums, eat less than their daily nutritional requirements, and go without medical care.

Another – a favourite – is that workers take home more than the minimum wage. While this is true, owing to overtime pay, even if they exceed the legally allowed ten hours of work a day, they cannot make more than approximately Tk. 15,000.00 (£126.58) in the most expensive city of a country where the living wage is over Tk. 25,000.00 (£211.00). Incidentally, the former was the amount the workers had asked the minimum wage to be raised to in 2016. Moreover, the only guaranteed pay is the minimum wage, with overtime beyond the statutory two hours at the employers’ discretion, and accounting malfeasance commonplace. It is said that the resilient workers want to work more so that they may make more, but this overlooks the fact that no-one being paid a fair wage wants to work beyond the limits of exhaustion for fun.

All of this amounts to entrapment in indentured servitude being presented as employers’ benevolence and women empowerment. The lack of alternative and better jobs is solely due to the lack of evolution from entrepreneurs running an oligopoly, not a lack of will on part of the workers to improve their lot in life.

The defences forwarded by factory owners are growth and development despite small margins decreasing annually, and unfair trade practices arising from buyers and brands having a clear advantage. In a business where the strong bully the weak, they are oblivious to the exploitation of those at their mercy: the workers. Those who add the most value are valued the least.

A legalised cartel manufacturing a product that is a necessity worldwide oppresses the workers, not only with impunity, but with the endorsement of foreign clients suffering from selective blindness and amnesia, and complicity of the entire power structure of the country – anti-worker labour laws, political parties, law enforcement forces, the judiciary, the media and the capitalist class. Bangladesh must not be boycotted, but its disenfranchised workers must be helped, their humanity enforced.

Ikhtisad Ahmed is a human rights lawyer turned writer from Bangladesh and a University of Nottingham alumnus. He tweets @ikhtisad. His website is http://www.ikhtisadahmed.com. This is part one of a two-part series. Image credit: CC by  Jaber Al Nahian/Flickr.