How the grassroots initiatives will shape Taiwan’s environmental future 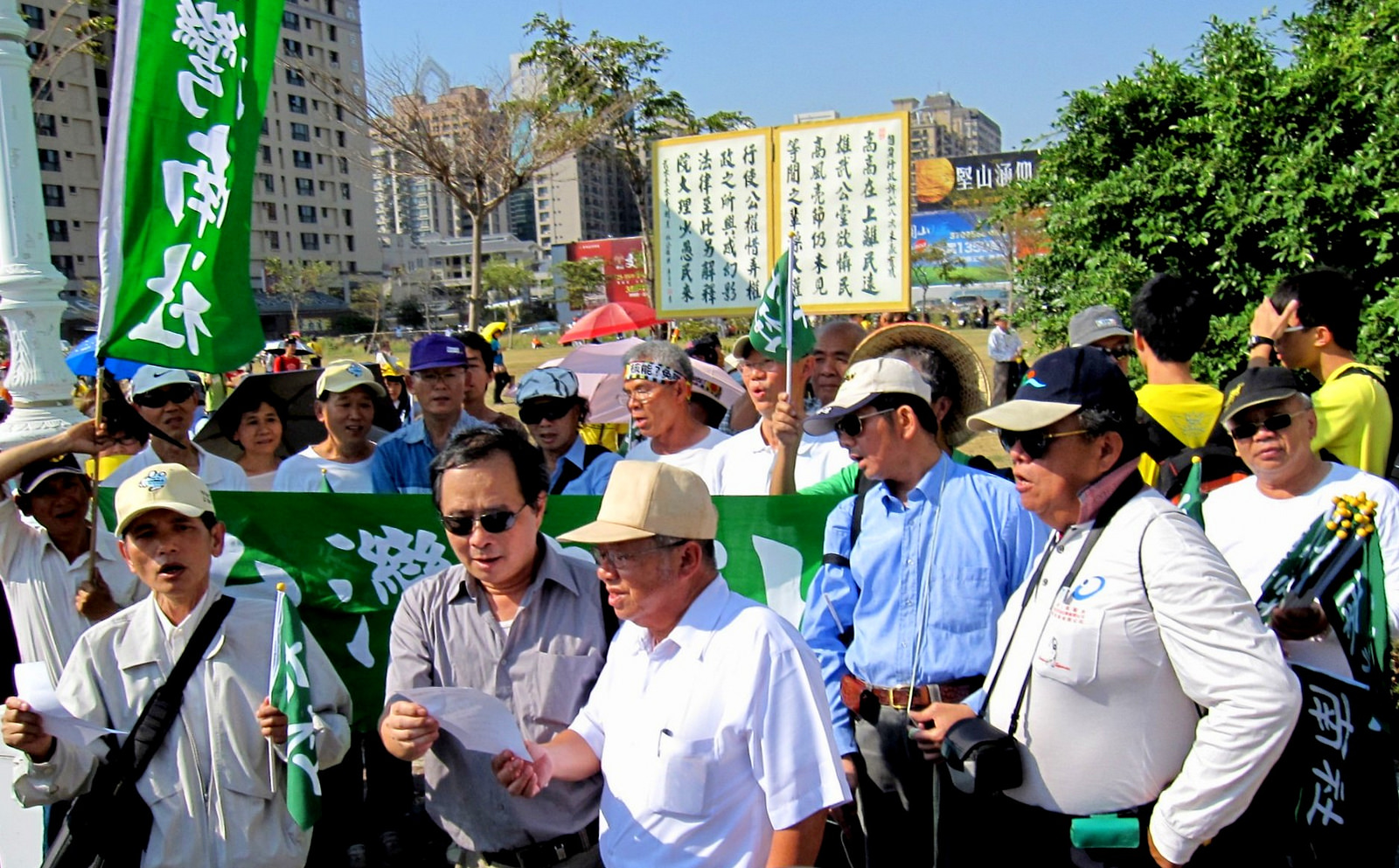 Since taking office in May 2016, Tsai Ing-wen has launched an ambitious campaign to restructure Taiwan’s energy portfolio for the dual environmental goals of a nuclear-free homeland and less reliance on dirty fossil fuel (coal). By the time the final nuclear reactor is scheduled for decommissioning in 2025, electricity will be 30 per cent from coal, 50 per cent from natural gas, and 20 per cent from renewables (including conventional hydropower). In 2016, these three sources respectively constituted 45.4 per cent, 32.4 per cent, and 4.8 percent of generated electricity, while nuclear power made up 12 per cent. As such, the Democratic Progressive Party envisioned a 1.5 times growth of natural gas power and a quadruple in renewables within one decade.

How does Tsai’s energy blueprint look like after nearly two years in office? On many fronts, the expansion of green energy encountered opposition out of environmental concerns. Large-scale solar energy plants (using photovoltaic panels) are criticised for intruding on farmland and indigenous territory, as well as damaging bird conservation. While the installation of on-shore wind turbines (684 as of now) has practically exhausted available locations due to their harmful effect to local residents, off-shore windmills are meeting resistance from fishermen and environmentalists who worry about the ecological consequences of underwater construction. The burning of natural gas comes with less carbon and sulfuric emission, but Taiwan needs to expand its import capacity by building new marine terminals. However, the planned third liquefied natural gas terminal in Taoyuan faces opposition because of the damage it would cause in terms of the algal reef.

Meanwhile, a greener energy prospect also faced a backlash from the old guard. Even though the construction of the fourth nuclear power plant (FNPP) was halted in 2014 because of massive popular opposition as well as the fact that both Tsai Ing-wen and Eric Chu of Kuomintang, two major presidential candidates in 2016, opposed it, Taiwan’s pro-nuclear camp remained reluctant to concede their defeat. Ma Ying-jeou, the Kuomintang president who was forced to stop the FNPP, recently claimed that Taiwan should maintain 20 per cent of its electricity generated by nuclear power. If his ideas were to be implemented, all the six existing reactors would have to be operating beyond their 40-year license and the FNPP would be brought back to life. To make it worse, consecutive failures of a transmission tower collapse and an emergency shutdown of an natural gas power plant in summer of 2017 brought about power outages, which severely damaged Tsai’s government credibility in energy management. Even with nuclear power in its full capacity, two incidents would still take place because it involved a systemic vulnerability with the power grid, rather than electricity generation. Nevertheless, they have appeared to strengthen the pro-nuclear camp argument that the DPP’s ideology was the root cause of the failure. The growth of popular concerns over air pollution unwittingly lent strength to the nuclear proponents. KMT politicians in central Taiwan launched a campaign to oppose thermal power plants. They maintained that the DPP has forced citizens to “trade their lung health for nuclear-free homeland”. The KMT consequently launched a referendum campaign to reduce the reliance on thermal power gradually for the local election scheduled in November 2018.

While the top-down energy transition appears uncertain, the pursuit for a more sustainable and clean energy future has inspired a number of grassroots initiatives. A number of anti-nuclear or environmental activists as well as young entrepreneurs have joined the campaign for renewable energy. Sunnyfounder (陽光伏特家) is a social enterprise startup founded in 2015, which has installed one megawatt capacity in the rooftops all over Taiwan. By making use of the fit-in-tariff for green energy, the company locates suitable private house for installation and recruit  investment per solar panel. Sunnyfounder also encourages one-off cash donation to charity institutions to become a long-term investment on solar energy that can generate sustained cash inflow for the beneficiary. Regardless whether it is investment or donation, the use of state-of-the-art Fintech provides real-time and transparent information to shareholders and stakeholders — a key in Sunnyfounder’s business model.

Before Sunnyfounder managed to stand on its feet financially, Homemakers Union (主婦聯盟), a veteran women-led environmental organisation in Taiwan, lent timely support. Homemakers Union decided to purchase 30 panels to celebrate its 30th anniversary in 2016. In the next year, a spin-off Green Energy Co-op (綠主張綠電合作社) was set up to promote solar panel installation. The co-op leaders self-consciously adopt a non-commercial approach that rejects the profit priority and insists on the internal democracy among co-op members. Since 1995, Homemakers Union has launched a successful consumer co-op campaign that now includes more than seventy thousand households. With its past experiences, Green Energy Coop is expected to encourage more female participation in the energy transition.

Taromak (達魯瑪克), a Rukai village in Taitung County, has become the candidate for Taiwan’s first energy self-sufficient community. The indigenous community hosted a small run-of-the-river hydroelectricity (0.9 megawatt) built in 1942, and it was the Taiwan Power Company’s proposal to dismantle this outmoded facility that led to a successful preservation movement and the ensuring efforts to promote renewables. For several years, environmentalists worked with tribal elders to demonstrate the benefits of solar panels in their annual millet festival in July. Outside donation including solar panels and money were solicited to provide electricity to the community activity center and two churches. A Taromak Power Company was registered in 2017, and is currently recruiting investors both within and beyond the community.

While the government-initiated energy transition focused on steady supply and prioritised large-scale investment, grassroots initiatives appeared more creative in utilising novel organisational and technological tools. Rather than eliciting NIMBY-style protests, the bottom-up approach was more socially embedded in the sense that residents were encouraged to become stakeholders with expected benefits. These decentralised attempts found it easier to motivate altruistic participation and helped to make energy development compatible with other social goals by empowering women and ethnic minorities. Chan Bing-Heng (陳秉亨), a key participant in the Taromak campaign, enthusiastically points out that its success can serve as a demonstration in eastern Taiwan, where renewables have made limited progress because of the lack of supply chain in spite of advantages such as sparser population and more available land. According to Chan, if a group of indigenous businesspersons and electricians emerge in this experiment, they can help to replicate the Taromak model throughout that region.

It remains to be seen whether these bottom-up efforts can take root in the years to come, particularly when the official blueprint has experienced difficulties on many fronts. It amounts to a fascinating experiment to see if Taiwan’s energy transition from below can manage to achieve sustainability whilst achieving other social goals at the same time.

Ming-sho Ho is Professor in the department of sociology, National Taiwan University, and a Non-Resident Senior Fellow at the China Policy Institute. He published Working Class Formation in Taiwan in 2014 and is currently working on a monograph on Taiwan’s Sunflower Movement and Hong Kong’s Umbrella Movement. Image credit: CC by Travis Wise/flickr.

Do Xi Jinping and Pope Francis have a lot in common?
China’s shifting rhetoric towards Taiwan explained