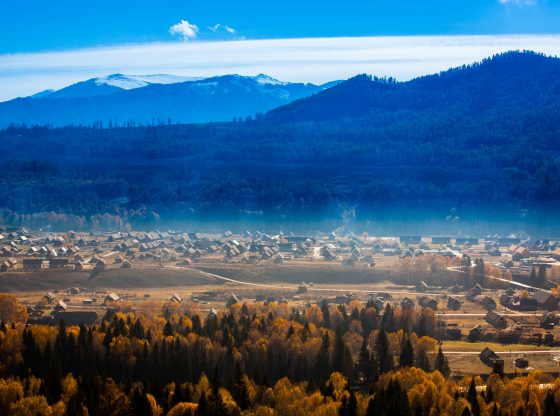 Xinjiang is China’s largest province, situated to the northwest, about 4000 km from Beijing. It could be considered as one of the most isolated regions in the world. Its location is in one of the most strategic areas in terms of China’s security and defence, as it shares its borders with eight countries: Mongolia, Kazakhstan, Russia, Kyrgyzstan, Tajikistan, Afghanistan, India and Pakistan.

Xinjiang is also located on the route of the Belt and Road Initiative or the ‘New Silk Road’.  Previously, it was known as Xiyu and became a Chinese territory during the Manchu dynasty in the mid-eighteenth century and was administered by the military. In 1884, it was declared a Chinese province and was the last area to be permanently occupied by China. Its original name Xiyu (western territory) was changed to Xinjiang which means ‘new borders’ in Chinese.

Ethnicity in Xinjiang can be divided into two main categories: the Turkic people who are natives of Xinjiang and non-Turkic people such as the Han Chinese, Russians, Manchurians and Indians. The Turkic people are made up of the Uyghurs, Kazakhs, Kirghizs, Uzbeks and Tajiks, with the Uyghurs being the largest. The Uyghurs in Xinjiang are Muslims and they share common heritage, language and religion with other Turkics living in Central Asia.

The Chinese government continues to suppress Islam and accused the religion for promoting nationalism and separatism.This has resulted in the alienation of Uyghurs, driving religious expression further underground and instead encouraged the development of a more radicalised form of religious identity.

During Deng Xiaoping’s administration in the 1980s, China demonstrated interest in human rights by ratifying international human rights treaties and emphasising human rights or renquan at home. Human rights conditions in most parts of China began to improve, including in Xinjiang, when compared to the era of the Cultural Revolution during Mao Zedong’s administration. It is essential to note that since the early 1980s, the Chinese Communist Party (CCP) amended some of its harsh policies in Xinjiang in order to gain the support and cooperation of the Uyghurs.  However, there has been a growing number of violent incidents reported in Xinjiang since the early 1990s, including riots and clashes between the Uyghurs and the Han population involving the security forces, attacks on government buildings and bombings. These incidents have formed Beijing’s perception that the Uyghurs pose an ethno-nationalist threat to the state. In addition, Islam has been viewed synonymously with Uyghur ethnic identity. Therefore, the subjugation of Islam is to ensure the subjugation of Uyghur identity.

The Chinese government responded to these incidents of violence by blaming the unrest on what it considers to be the ‘Three Evils’, which are ‘religious extremists,’ ‘terrorists’ and ‘separatists’ and launched a campaign against these evils in 1996. Since then, the Chinese government has increased the number of arbitrary arrests and imposed more restrictions on the cultural and religious rights of the Uyghurs.

There have been growing ethnic tensions between the Uyghurs and the Hans. It has been fuelled by contemporary issues such as discrimination, mass migration of the Hans to the province and unemployment. Although the province has developed steadily since the mid-1980s the prosperity of the province was mainly focused on the areas populated by the Hans in the north of Xinjiang, such as Urumqi and Turfan, compared to the south such as Kasghar and Hotan, which are majority Uyghur. The locals have been bypassed economically.

It is noteworthy to mention that the Uyghurs have encountered an erosion of their social, cultural and economic rights. Political and security conditions in Xinjiang have tightened in the aftermath of the July 2009 Riots. The numbers of people detained by government have increased and many have ‘disappeared’ without a trace. For the Uyghurs, their struggle is to preserve their religious and cultural identity. In addition, they are hoping to encounter fair treatment so that they too can experience the economic prosperity of their own homeland. The majority of Uyghurs are demanding greater economic and social rights rather than wanting a separate political entity.

In the aftermath of the 2009 ethnic unrest, the Chinese government was criticised by the international community for the stagnated progress in political and social rights, with some even considering that the Chinese government has reverted its human rights policy in Xinjiang. Many Uyghur leaders who wanted more freedom for the Uyghurs and spoke against the government have been detained.

The Chinese government has acknowledged the international criticisms against its human rights policies, although it refuses to admit these allegations. In response, it has published several white papers on the conditions in Xinjiang such as the White Paper on Human Rights in China, White Paper on History, Development of Xinjiang and White Paper on Freedom of Religious Belief in China, which is aimed at informing and educating the cadres, masses as well as providing a justification to the international community on China’s human rights.

Although the Chinese government claims that it allows freedom of religion, in reality genuine religious freedom, which includes the right to manifest, in public or private, one’s religion or belief in worship, observance, practice and teaching is currently not permitted for the Uyghurs living in Xinjiang. The Chinese government continues to suppress Islam and accused the religion for promoting nationalism and separatism.

This has resulted in the alienation of Uyghurs, driving religious expression further underground and instead encouraged the development of a more radicalised form of religious identity. The government’s attempt to suppress Islam in Xinjiang does not only violate human rights but it has increased hatred between the Hans and the Uyghurs. Even moderate voices from the Uyghur community that could mediate tensions are likely to dwindle as a result of the harsh policies of the government.

The Chinese government should set about to improve the province’s education system, especially for the Uyghurs, in order to ensure that have better opportunities to participate in the province’s economic development. In addition, the Chinese government should offer more incentives to the middle class and well educated Uyghurs to remain in Xinjiang. They should be recruited into the province’s bureaucracy and promoted to high administrative posts instead of reserving such posts for the Han migrants.

Roy Anthony Rogers is a Head of the Department of Strategic and International Studies (JPAS), University of Malaya. His area of research includes government and politics of the Central Asian republics and human rights conditions in Xinjiang. Image Credit: CC by PXHere.