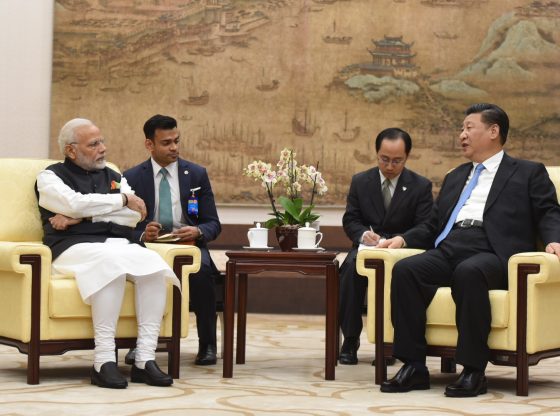 The informal summit between Prime Minister Narendra Modi and his host President Xi Jinping in the central Chinese city of Wuhan (April 27-28) was distinctive, in the context of the uneasy and often prickly bilateral relationship between India and China since October 1962.

Wuhan unfolded in a leisurely and tranquil manner against the backdrop of the Doklam crisis of September last, when it appeared that the two Asian giants were on the verge of military hostilities in the Himalayas. However, politico-diplomatic prudence and military restraint on both sides ensured that this unfortunate exigency did not occur and an opaque modus-vivendi was arrived at. The Xi-Modi determination to restore visible normalcy in their personal interactions and steer the relationship back to a less discordant template was evident in the gist of the takeaways from this informal summit.

The word ‘strategic’ was clearly preferred by both the leaders, who issued “strategic guidance” to their militaries to adopt ‘strategic restraint’ so that the spirit of the Peace and Tranquility Agreement of 1993 was recalled and reiterated. Furthermore, both sides agreed to strengthen ‘strategic communication’ on matters of common interest, which inter alia included the intractable territorial and border issue; terrorism (where the nuances were varied and expectedly so, given the Pakistan factor); trade-economy-investment; and more expansive issues like world stability and the role of the two Asian giants, who in the Chinese formulation are: “important countries with ‘strategic’ autonomy”.

Apart from the more familiar articulation about the desirability of the two nations evolving a cooperative bilateral framework, wherein deeply held differences could be embedded in a larger lattice of shared interests, the more significant departure was to reach an agreement in principle on a joint economic project in Afghanistan. Given that India chose to stay outside the much Xi Jinping’s publicised Belt and Road Initiative (BRI), when it was unveiled with considerable fanfare in May 2017, this initiative signals that Delhi can engage with Beijing in a joint venture and the sub-text of this has important implications for how India and China can deal with the Pakistan factor in the regional context. However, this is still a work in progress and if Afghanistan can be stabilised in a modest, but meaningful and sustainable manner in the near future by Sino-Indian cooperation, many other paths for rebuilding and reconciliation can be envisaged.

Geography, history and the individual strategic cultures of China and India and the manner in which contemporary international relations operates, are structural elements that inhibit the two Asian giants from evolving a truly cooperative and suspicion-free relationship

The mood at Wuhan was one of avuncular bonhomie, with the two leaders walking through picturesque gardens and along a lake front, visiting the local museum and reflecting, almost nostalgically about their civilisational pedigree and the golden period in global history when the two Asian neighbours contributed to more than half of global wealth and prosperity. The recall of the early years of the Sino-Indian relationship and the Hindi-Chini bhai-bhai mood (India-China are brothers) was palpable, but this could not mask the reality that post Doklam, there is a deep mistrust and suspicion in both capitals — about the ‘duplicitous other’.

This trust deficit led to an anomalous trajectory of bilateral engagement, which moved from an unrealistic expectation soon after the two nations became independent (1947 and 1949 respectively), that post-colonial Asian solidarity would soon dawn with India and China in the vanguard. The brief war of October 1962 was a reality check and in the Indian view, a combination of Chairman Mao’s perfidy and Nehru’s naivety, led to a humiliating military defeat that forced non-aligned Delhi to turn to Washington for help.

The anomalous characteristic of the bilateral was the reality that from 1962, till the Rajiv Gandhi visit of 1988, Asia’s two largest nations, who shared a 4,000 kilometre of un-demarcated border, had ostracised each other. Political courage and sagacity enabled the two leaders at the time (Rajiv Gandhi and Deng Xiaoping) to re-establish political and diplomatic contact and the last 30 years are testimony to the resilience of the often uneasy and troubled bilateral relationship.

Geography, history and the individual strategic culture of China and India on one hand and the manner in which international relations have unfolded, are structural elements that inhibit the two Asian giants from evolving a truly cooperative and suspicion-free relationship. The cross of history and the leavening of lofty national aspiration with misplaced anxiety have constrained leaders in Beijing and Delhi from making radical policy shifts and hence an uneasy status quo prevails.

The world’s two largest armies (with a combined personnel strength of over 3 million troops) patrol the 4,000 km un-demarcated stretch over inhospitable and largely uninhabited terrain with no agreed maps — but the certitude of national narratives and embroidered history. Consequently, Xi and Modi have inherited a testy territorial dispute that is largely dormant but flares up as it did in Doklam (2017) and Chumar in the Ladakh region (2014). The latter incursion by the PLA took place in September 2014 when PM Modi was receiving President Xi in Ahmedabad and remains one of those intriguing events in bi-lateral ties.

Did President Xi know about and endorse the Chumar incursion by the Chinese military to convey a not so subtle signal to Modi — who had just assumed office as Prime Minister? Or was it a case of the hardliners in Beijing acting autonomously to send a signal to their own President by creating a fait accompli situation? Thus one could infer that the most significant take-away from Wuhan is the ‘strategic guidance’ issued by the political apex to the military commanders on both sides to maintain strategic restraint in undemarcated and disputed territory. The Indian army is not an autonomous actor, but can one make the same assertion about the PLA?

It merits notice that in 2014, as per Indian estimates, transgressions and incursions by the PLA peaked at 555. In the following years, the tally is: 387 in 2015, 273 in 2016, and a total of 426 in 2017 respectively. The current year has already notched up 80 plus PLA incursions and the Chinese side would no doubt have their own such list. The success of Wuhan will lie in how this graph moves and the degree to which the Xi-Modi ‘strategic guidance’ is internalised by their principal domestic interlocutors.

C Uday Bhaskar is a retired Commodore in the Indian Navy and currently serves at the Director, Society for Policy Studies (SPS), New Delhi. He tweets at @theUdayB. This article was first published on DNA India and has been republished with the permission of the author. Image credit: by Indian Ministry of External Affairs/Flickr.