Macron trip a chance for Australia and France to increase ties

Home /Australia, France/Macron trip a chance for Australia and France to increase ties 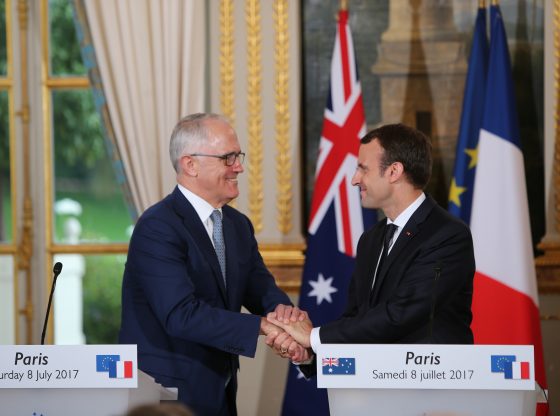 Free marketeer and hard-headed international security realist, French President Emmanuel Macron is making his first visit to Australia this week. It comes hot on the heels of his trip to the US to meet with Trump where the Iran deal was the centrepiece of talks. As Britain’s Theresa May and Germany’s Angela Merkel are now in weaker positions than they were, Macron is emerging as the face of European diplomacy.

France has significant national interests in the Indo-Pacific and its involvement in the region is growing. Some 8,000 French defence personnel are permanently located throughout the Indo-Pacific: 4,500 in the Indian Ocean, 2,800 in the Pacific Ocean and 700 sailors on deployment.

With French company Naval Group designing the 12 conventionally-powered Shortfin Barracuda submarines for the Royal Australian Navy, Australia is entering a period of much closer strategic cooperation with France. This is set out in a recent Australian Strategic Policy Institute study, More than submarines: New dimensions in the Australia–France strategic partnership.

While France might not be the first name to come to mind as a regional partner for Australia, there are already a lot of activities going on between the two countries, and plenty of future opportunities.

China’s interest in establishing a naval base in Vanuatuhighlights the importance of Australia and France making more coordinated efforts to protect shared strategic interests in the region. Neither Paris nor Canberra would welcome a Chinese military presence, so both Australia and France will be keen to make sure the Pacific island states turn first to them to address security worries.

France has largely focused its capabilities on the western part of the Indian Ocean. But getting a significant power like France on board to strengthen maritime security arrangements in the Indian Ocean region can only be to Australia’s advantage.

In the Pacific, Australia encourages French engagement, such as the recent support it showed for the admission of the French-controlled territories of New Caledonia and French Polynesia to the main regional group, the Pacific Islands Forum.

France contributes to the Pacific islands through aid, disaster relief, and search and rescue operations. It supports the island countries with maritime surveillance of their Exclusive Economic Zones (EEZs), as well as patrolling the high seas.

Australia could extend those efforts by working with France to conduct joint patrols of the high seas area adjacent to its offshore zone and New Caledonia’s EEZ.

Australia could also encourage France to become a party to the Pacific Niue Treaty Subsidiary Agreement (NTSA) that allows for the cross-vesting of enforcement powers between countries, as well as hot pursuits into another country’s EEZ. France is not a party to the NTSA, although it is highlighted in the Agreement that parties are to seek to cooperate with non-parties, including surveillance partners such as France.

Another important issue for France in our region is the future of New Caledonia (Macron heads there after leaving Australia). Its independence referendum is on 4 November. If the proposed ballot fails to achieve independence this year, then two more ballots must be held in 2020 and 2022.

The French won’t want to lose influence in New Caledonia, regardless of the outcome. As France positions itself as an Indo-Pacific player, New Caledonia is strategically important to Paris. Much of the country’s civil service, education infrastructure, and judiciary, is run by people either from mainland France or with deep ties to France. All this means it’s very unlikely there will be some sort of sudden vacuum.

But there’s room for developing closer Australian relations with New Caledonia, in areas such trans-border crime prevention and joint analysis of attempts at foreign political interference.

The Coral Sea is another area where Australia could engage France. Discussions about establishing a Coral Sea Council for oceans management should be started with France (New Caledonia), Vanuatu, Papua New Guinea and the Solomon Islands.

Australia could also look south. In the Southern Ocean, fisheries enforcement patrols are undertaken by French authorities in the maritime areas adjacent to the French Southern and Antarctic Territories (Kerguelen and Crozet Islands) and Australia’s Heard Island and McDonald Islands. Australia’s fisheries and border force officers embarked on French vessels are able to enforce Australian law in Australia’s jurisdiction.

Australia and France work well together in Antarctica. The two countries should be working to pool resources with a view to dominating eastern Antarctic science and logistics. Australia is getting a new ice breaker in 2020 and this will help the country support resupply to the French base at Dumont d’Urville.

In the Indian Ocean, France has been focused on exercising sovereignty over its territories in the south-west, as well as wanting to deploy a force in the greater Indian Ocean with a military presence in the Persian Gulf and the Gulf of Aden.

As part of that, France is building a strategic partnership with India focused on the maritime domain.

France has largely focused its capabilities on the western part of the Indian Ocean. But getting a significant power like France on board to strengthen maritime security arrangements in the Indian Ocean region can only be to Australia’s advantage.

In other words, President Macron’s visit is a real chance to highlight that Australia and France have overlapping interests on issues to Australia’s east, south and west—something that isn’t true of many other partners.

When former French Ambassador to Australia, Christophe Lecourtier recently quoted French renaissance philosopher Montaigne, “It is a beautiful harmony when saying and doing go together’’, he was confident that this is what Australia and France will be doing together in the 21st century. Let’s hope he is right.

Anthony Bergin is a senior research fellow at the ANU National Security College, and senior analyst at the Australian Strategic Policy Institute (ASPI). This article was first published on the Asia and Pacific Policy Society blog and can be found here. Image credit: by Présidence de la République France/Flickr.

France and Australia: a new strategic partnership in the Asia-Pacific?
The U.S. military presence in the Middle East and Central Asia