Politicians, bureaucrats, and governance in ‘New’ and ‘Old’ Pakistan 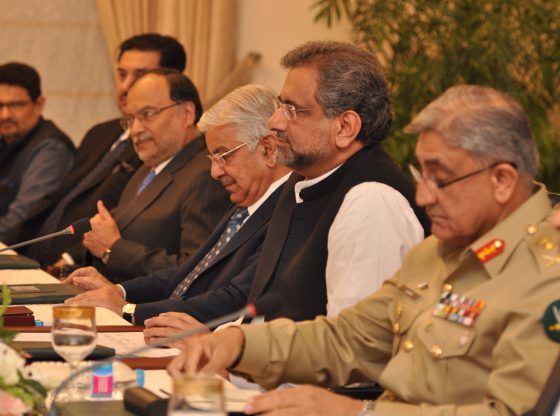 In judging the performance of parties in power, the focus tends to be on the politicians’ alone; for example, lack of progress on development projects is blamed on a ‘lack of political will’. Very rarely does the focus alight on the bureaucracy, and how politicians interact with them over the course of a term in government. This piece provides a very brief overview of politician-bureaucrat interactions over the last few years. In particular, it highlights the PMLN’s use of strategic ties to the bureaucracy to entrench themselves in the fabric of the state, in Punjab (the party’s heartland and the centre of power in Pakistan) and at the centre. I do not discuss Balochistan here – the province is an outlier in terms of security, political integration, and governance.

Pakistan’s bureaucracy has been the subject of manipulations by both civilian and military forces. Military rulers have attempted to mould the bureaucracy to their own needs, usually by laterally inducting military officers into the civil services. Attempts to reform the bureaucracy by democratic rulers have either been short-lived (such as Zulfikar Bhutto’s civil service reforms) or limited to the publication of commission reports that were never implemented.

It is important to note here that the bureaucracy is not completely helpless in either of these scenarios. Where their interests diverged from the military’s, the bureaucracy sought patrons amongst politicians—and vice versa—in the interest of career stability and choice postings. In the Musharraf era, the bureaucracy became resentful of military interference in the civil services and were angered by being made subservient to elected, non-partisan mayors under Musharraf’s new local government system. And so, when the PPP and PMLN returned from exile, the bureaucracy sought their patronage.

The PMLN’s ethos of ‘getting things done’ ensured that the party comfortably won the 2013 election. The strategy of appointing favoured bureaucrats to key posts was extended to the centre … Effectively, the Sharif brothers had set up a feeder system for efficient and loyal bureaucrats from Punjab to Islamabad.

The Mandarin Politician and his Loyal Bureaucrats

Between 2008 and 2018, the PMLN has taken advantage of relative peace in Punjab to set itself apart from the previous PMLQ government (2002-2007) and from the PPP government at the centre (2008-2013) by prioritising service delivery—exemplified by high visibility infrastructure projects such as the Lahore MetroBus—to its voters. The PMLN’s success was enabled by their strategic appointment of loyal bureaucrats to key posts within the administrative hierarchy.

Tried and tested officers—known in the local press as ‘blue-eyed bureaucrats’—were deployed to ensure that projects were completed on time, policies were actually implemented, and the writ of the Chief Minister’s office was established in government departments and districts. As one example, Ahad Cheema, who had previously worked closely with the Chief Minister’s Secretariat as the Lahore District Coordination Officer, was appointed as Director General of the Lahore Development Authority and given the responsibility of ensuring the completion of the Lahore MetroBus in time for the 2013 election.

The PMLN’s ethos of ‘getting things done’ ensured that the party comfortably won the 2013 election. The strategy of appointing favoured bureaucrats to key posts was extended to the centre—for instance, Fawad Hasan Fawad, who had worked closely with Shahbaz Sharif in Punjab, was given senior postings in the Prime Minister’s office. Effectively, the Sharif brothers had set up a feeder system for efficient and loyal bureaucrats from Punjab to Islamabad.

In Khyber Pakhtunkhwa, the PTI government has focused on transforming the province into ‘naya Pakistan’ (new Pakistan). Certainly, the party has introduced police reform that has widely been commended and there has been a move toward merit-based recruitment in the education and health sectors. However, the PTI’s attempts at governing the province were marred by conflict between the government and the bureaucracy. Chief Minister Khattak had confrontations with a series of senior bureaucrats appointed to the province over administrative issues such as the transfers of bureaucrats. The creation of a Khyber Pakhtunkhwa Ehtesab (accountability) Commission which proceeded to arrest senior bureaucrats led to ‘resentment and fear’. There were also reports that the province’s bureaucracy was bypassing the Chief Minister and his decisions and reporting to Imran Khan instead. By January 2018 though, the government and the bureaucracy seemed to have reached an agreement – the government approved a ‘special allowance’ for Khyber Pakhtunkhwa’s bureaucrats as a means of addressing their grievances.

In Sindh, the provincial government’s performance remains lacking. In 2016, the PPP responded to reports of poor government performance by replacing the Chief Minister Qaim Ali Shah with the younger, more energetic Murad Ali Shah. Within weeks of taking up his post, the new CM began to upend the laid-back attitude of the Sindh bureaucracy, ensuring punctuality and threatening to dismiss officers who failed to let go of their ‘lethargic attitude’. However, the bureaucracy in Sindh remains deeply compromised, at all levels. Ghost employees and nepotism remain persistent problems that require much more sustained effort and time to resolve.

It is impossible to say anything definitive about election results at this point. However, what can be guaranteed is that the bureaucracy, empowered by the PMLN’s years in power, particularly in Punjab, will fight to remain influential regardless of how the chips fall on election night. Recent attempts to bring the senior bureaucracy to account—such as the National Accountability Bureau (NAB)’s prosecution of the Director General of the Lahore Development Authority, Ahad Cheema, for alleged corruption in a housing development scheme—have had the bureaucracy up in arms. Cheema’s arrest by NAB led to the bureaucracy contemplating unprecedented strike action, and finally settling on a few hours’ pen-down strike.

At the moment, the election schedule has still not been announced, and the consequences of delimitation, and interventions by the caretaker government, the Supreme Court, and the ‘Establishment’ can water down any benefits a party may have gained from their ties with the bureaucracy. Therefore, the bureaucracy will be watching closely to decide who to ally itself with to maximise career stability and minimise chances of accountability investigations for bureaucrats. If that ally happens to be the PTI, so be it.

Sameen Ali has a PhD in Politics & International Studies from SOAS University of London. She teaches Political Science at the Lahore University of Management Sciences, Pakistan. She tweets @sameen_mohsin. Image Credit: CC by PMLN/ Wikimedia Commons.