US withdrawal from JCPOA: The impact on South Asia 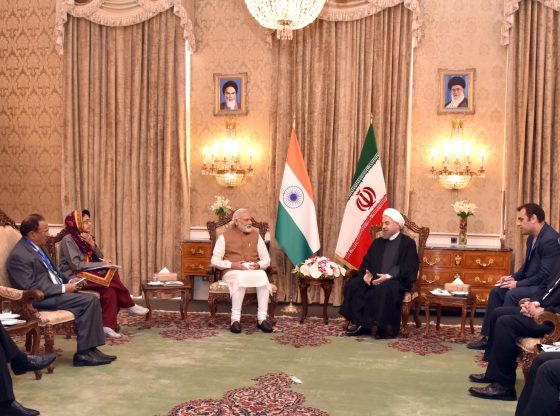 New Delhi reacted calmly to President Donald Trump’s decision to pull out from the Iran Nuclear agreement signed in 2015. The Ministry of External Affairs issued a statement, saying:

‘India has always maintained that Iranian nuclear issue should be resolved peacefully through dialogue and diplomacy by respecting Iran’s right to peaceful uses of nuclear energy and international community’s strong interest in exclusively peaceful nature of Iran’s nuclear program,’

The Iranian Envoy to India, Massoud Rezvanian Rahaghi (who is actually Deputy Chief of Mission, but is officiating as Ambassador), in a conversation with Indian Express stated that since European countries are backing the deal along with Russia and China, the deal would still continue. Therefore ties between New Delhi and Tehran would not be excessively affected.

The US withdrawal from JCPOA has not really helped New Delhi, but it also provides an opportunity to reshape the narrative in South Asia.

In the US, there is a strong lobby which argues that countries like India should be exempted from the Countering America’s Adversaries Through Sanctions Act (CAATSA). During a Congressional hearing held by the Senate Armed Services Committee, Defence Secretary James Mattis spoke for the need of providing India a national security waiver, gainst imposition of sanctions for the purchase of S-400 air defence missile system from Russia.

A number of Congressman and Senators, echoed Mattis’ views pointing to the burgeoning Indo-US defence ties, and the detrimental impact of a strait jacketed approach. It is likely that the US and India will find a way to deal with the Iran issue, so there may be cause of concern, but no real need to panic in the short run.

There is absolutely no doubt that India, along with a number of other countries, heaved a sigh of relief after the JCPOA (Joint Comprehensive Plan of Action)/Nuclear Agreement was signed between the P5+1 countries and Iran in 2015. India had to drastically reduce its oil imports from Iran, when the US had imposed sanctions in 2011-2012.

Less than a year after the signing of the JCPOA,  Indian PM Narendra Modi visited Iran  and signed an agreement with Iranian President Rouhani that India would provide assistance to the tune of 500 million USD for the development of the Chabahar Port (the first phase of which was developed in 2017).

Pakistan has refused to give access to Afghanistan, via land (for transportation of goods) and blocked India’s participation in the Afghanistan, Pakistan, Transit Trade Agreement, (APTTA).  According to the APTTA, Afghan goods can enter India via Wagah (Pakistan), but Indian goods can not travel via Pakistan territory to Afghanistan. In this context, the Chabahar project is extremely important.  During Modi’s 2016 visit, India, Afghanistan and Iran signed an agreement to develop a trade and transit corridor, which would help India gain access to Central Asia.

In 2017 alone, wheat shipments numbering 15,000 tons have been transported to Afghanistan  through Chabahar. The significance of the Chabahar Project in the ever strengthening India-Iran relationship is borne out by the fact, that during President Rouhani’s visit to New Delhi in February 2018, a lease contract was signed for the ShahidBeheshti port of Chabahar between the Port and Maritime Organization (PMO), Iran and India Ports Global Limited (IPGL). Ina addition, a joint statement, issued by Rouhani and Modi, also referred to the need to make Chabahar a part of the ambitious International North- South Transport Corridor (INSTC) which will connect India to Russia and Europe.

After the removal of sanctions in 2015 under JCPOA, Iran emerged as the third largest supplier of oil (after Iraq and Saudi Arabia). Between April 2017 and January 2018, Iran supplied over 18 Million tonnes of crude oil. During Rouhani’s visit it was also decided to address issues which are impeding closer business ties between both countries.

Neither Chabahar Port nor any other projects face any immediate threat even with the withdrawal of the US, since a number of key countries fervently support this agreement  and the CAATSA agreement. Commenting on the Chabahar Port project, Rahaghi stated:

‘We regularly hear that engagement in development of this port is of strategic importance for India. This, irrespective of President Trump’s decision and the approach of the US towards such cooperation, means that India’s engagement in the development of Chabahar should not be affected by any political cause or excuse. To us, strategic interests need strategic decisions and actions in a timely manner’.

It remains to be seen if India and Pakistan can explore the possibility of resolving the issue of land transit trade to Afghanistan. In recent months, both sides have made overtures towards each other.

Indian High Commissioner to Pakistan, Ajay Bisaria, has been reaching out to the business community in Pakistan, batting for closer economic ties. Indian business lobbies (especially those with interests in Afghanistan) have been seeking land access,. The business community of North India and the state of Punjab in particular would  especially benefit from such a move.

Interestingly, a opinion piece, ‘Pakistan’s military reaches out to India’, published in RUSI (Royal United Services Institute) which speaks about a change in Pakistan military’s (especially the army chief Qamar Ahmed Bajwa) mindset towards India, makes specific reference to this issue. In October 2017, Pakistan’s army chief had expressed his openness to engage with India on the issue, but this offer was turned down by India saying that Pakistan was not serious.  Beijing, which is seeking to reset its ties with New Delhi, can play a positive role in resolving this issue. New Delhi can also determine whether there is a genuine change of mindset in the Pakistan army, or whether the army chief is offering mere platitudes.

In conclusion, Beijing, New Delhi and Islamabad need to be more open and pragmatic. The US withdrawal from JCPOA has not really helped New Delhi, but it also provides an opportunity to reshape the narrative in South Asia. China and India have found common ground on a number of issues in recent months, it remains to be seen whether the recent US decision provides them another opportunity to explore common ground.