An Analysis of PTI’s Corruption Record 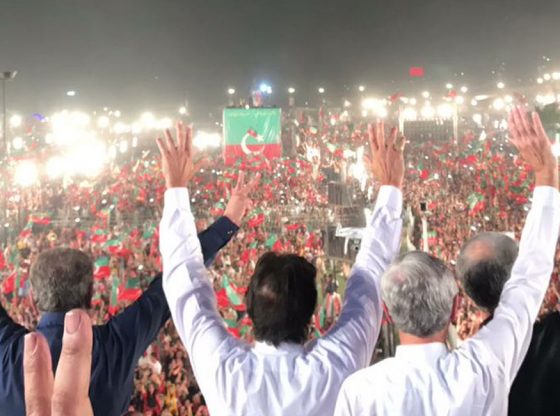 Pakistan Tehreek-e-Insaf (PTI) leader Imran Khan on April 29, 2018 promised to bring radical changes to the country after the forthcoming general elections, while addressing a sizeable crowd at Greater Iqbal Park (Minar-e-Pakistan) Lahore at an election campaign kick-off rally. However, the majority of the crowd came from other parts of the country, mostly from the Khyber Pakhtunkhwa (KPK), followed by Islamabad and Karachi. Lahorites were sparse at the public meeting venue.

Historically Lahore has always been the venue of choice to kick-off election campaigns or for any other landmark announcement. Starting with the national anthem, Khan vowed to create a ‘Naya Pakistan’ (New Pakistan), his hallmark slogan. He accused previous governments of corruption and responsibility for the country’s perilous economic situation.

Khan’s 11 points for Naya Pakistan are not necessarily ground-breaking. Almost every political party has used similar agenda points in their manifestos and former military dictatorships have also used them as an argument against civilian leaders. The main allegation which the PTI leadership and its supporters raise against the PMLN – their arch political rival, especially in Punjab – is about the corruption and lack of development in Punjab despite controlling the provincial government.

However, it is important to look at the PTI’s own five-year performance in the province of KPK where they formed the provincial government in 2013 to determine its validity in tackling corruption.

The Ehtesab Commission (Accountability Commission) was established in 2014, through an Act of the KPK Provincial Assembly, as an independent and autonomous body. Its  purpose was to combat corruption and to restore public trust in the government.  It had jurisdiction over organizations, public service officials, politicians and any citizens involved in malpractices which resulted in the loss to the government exchequer. Its main role was to reduce corruption through accountability and good governance.

During the 2013 election, Khan linked corruption to problems such as inflation and poverty. After the election the PTI got the chance to form the provincial government in KPK. However, its provincial departments are highly politicised and rampant with corruption.

General (retired) Hamid Khan was appointed as the director general of the EC. Under him the Commission, in less than two years, conducted 90 inquires, 43 investigations followed by 29 references of mega corruption filed in the accountability court. For the first time in the history of KPK, many powerful ministers and senior bureaucrats were arrested on corruption charges. This became a matter of concern for the PTI government. In order to protect their ministers, the provincial government reduced the powers of the EC by promulgating an ordinance making the approval of the five-member commission mandatory for arresting a suspect and reducing the maximum period of physical custody of a suspect from 45 to 15 days. The ordinance provides that no legislator will be arrested by the commission without prior intimation to the Senate’s chairman or the Speaker of the national or provincial assembly. Similarly, the chief secretary will have to be informed before the arrest of a civil servant.  General Khan resigned in protest as DG EC in February 2016. Since then the post of the DG is vacant and the EC has stalled.  The 29 corruption references which were sent to the courts are yet to be decided because of the lack of will at the EC to pursue cases against sitting ministers.

This situation has helped corrupt PTI ministers carry on with their malpractices. The claim of ‘Corruption Free Naya Pakistan’ is very pleasing to the ears of the voters but looking at the EC case it seems far from reality.

The KPK government has always boasted of their non-politicized and corruption-free provincial police. The media constantly promoted this image in comparison to the Punjab police. The latter was always portrayed as a corrupt and highly politically influenced department. In reality, as late as March 2018 the National Accountability Bureau (NAB) has ordered a high level inquiry into the KPK police mega corruption scam during Nasir Khan Durrani’s tenure. There have been severe embezzlement claims – with losses numbering in the millions – in equipment purchasing, construction, vehicle maintenance, and daily procedure.

The performance of KPK Prosecution Department is no different than the EC or the police.  The main objective of the prosecution department is the provision of justice to its citizens, one of the basic functions of Government.  The three main functions of the department as highlighted in the Prosecution Service Act of 2005 form a backbone of the province’s justice system. Out of the four provinces, KPK had the worst performance of the prosecution department, rampant with extreme corruption, during the five years’ tenure of PTI government. Even the Supreme Court raised serious questions about the department.

The performance of three key departments was deplorable over the last five years in KPK. Chanting slogans of making ‘Corruption Free Pakistan’ while at the same time being unable to make the province corruption-free demonstrates hypocrisy.  Moreover, 2018 is not the first time these claims have been made. During the 2013 election, Khan linked corruption to problems such as inflation and poverty. After the election the PTI got the chance to form the provincial government in KPK. However, its provincial departments are highly politicised and rampant with corruption.

Individual politicians are part of the problem. In 2012, Khan announced that the party will not accept any corrupt members. He swiftly reversed this position. In addition, in the recently concluded election of the Senate, Mr Khan joined hands with Asif Zardari the co-chairman of the Pakistan People’s Party and  his arch rival, whom he has always painted as the head of a corrupt mafia and Sindh’s Pharaoh.   Both the political leaders were in agreement in proposing Sadiq Sanjrani as the chairman Senate and worked very hard to buy votes by using unfair means.

Corruption Free Pakistan is only a cliché. Unfortunately, once it comes to election time, the nation appears unable to remember the earlier false promises made by political leaders. It is high time that people start looking at past performance instead of believing in slogans.

Khurram Shahzad Siddiqui is a Doctoral Researcher in the School of Politics and International Relations at the University of Nottingham, where he is affiliated with the The Centre for Conflict, Security and Terrorism (CST) and The Institute of Asia and Pacific Studies (IAPS). His research interests include Insurgency, Terrorism, Counter Insurgency Warfare, Contemporary Warfare, Global Security, Pakistan-China Security Collaborations and Baluchistan. He can be reached at Khurram.Siddiqui@nottingham.ac.uk and he regularly tweets @KSSiddiqui_17. Image Credit: CC by News International.

Women’s football in China: Bend it like Sun Wen?
The China-U.S. conflict is about much more than trade