In defence of Imran Khan 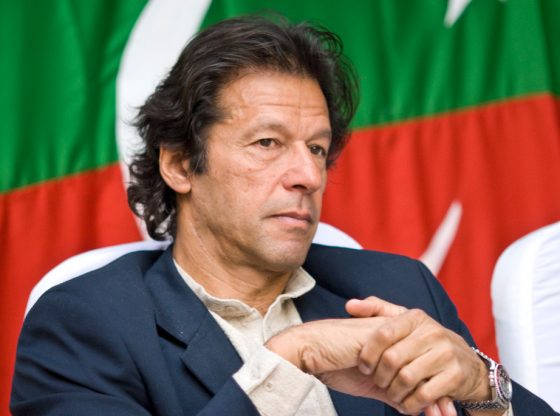 Imran Khan is a former international cricketer-turned-politician who launched his Pakistan Tehrik-e-Insaf (PTI) party in 1996. But it was only in 2013 that he emerged as a serious player on the Pakistani political scene and a leading contender in that years’ general elections. Though he did not emerge the victor, he remained the key opposition figure, keeping Mr. Sharif off balance through a mix of street campaigning and court petitions, which finally led to Mr. Sharif’s dismissal last July.

Since July 2017, Nawaz Sharif has been in the eye of a politico-legal storm. The apex court initially debarred him as the prime minister, then as the party chief, and most recently, closed the door on him to parliamentary politics for life. Regular National Accountability Bureau (NAB) hearings and a looming conviction have taken the wind out of the PML-N’s sails. With Mr. Sharif looking at likely jail time, and several leaders of his party, the Pakistan Muslim League-Nawaz, enmeshed in corruption investigations, Mr. Khan says his time has arrived. He offers himself as an alternative to what he calls an immoral political elite, and says he will work to improve education, health and the environment. His prospects have brightened in light of his closer ties with the military, which controls the main pedals of power in Pakistan and has dominated both foreign and security policies for years.

For five years, Imran Khan’s PTI was successfully able to portray itself as the most efficient opposition party. On the floor of the house, in the courts and on the streets, they have been fighting the PML-N tooth and nail. While PTI stole the limelight, PPP in Punjab has slowly faded into oblivion. Also while there have been no major shifts in the political landscape in interior Sindh so far, the situation in Karachi has been boisterous. After Altaf Hussain’s shameful August 22, 2016 speech, the Muttahida Qaumi Movement-Pakistan (MQM-P) found itself rudderless, and in a short span of time was split further into MQM-Bahadurabad and MQM-PIB.

Imran Khan has a vision. He harnesses remarkable energy, resilience and intelligence. He looks at the long-term impact. Mr. Khan has very rightly pointed out that countries need to support human development, not just infrastructure.

On April 29, Mr. Khan welcomed and thanked the crowd who flocked to the iconic Minar-e-Pakistan to attend the party’s power show in Lahore. Addressing the rally, Imran, who earlier dubbed it a “Tsunami plus show”, expressed his gratitude to the participants for turning out in large numbers to witness the “historic” gathering.

Here Khan presented an 11-point agenda to make a “Naya” (new) Pakistan. While addressing the massive gathering, he said, “Ask yourself, why was this country made? Why, on this ground in 1940, did Quaid-e-Azam declare that we want Pakistan?”

I am one of those people who have been disillusioned from Pakistani politics for a long time. But after having met him in person on more than one occasion, I have at least noted a lack of pretentiousness in him. His home is simple. Critics have pointed out his personal life as proof of his inadequacy as a leader. A politician’s personal life does not necessarily have bearings on his political leadership but if it comes down to staking out the personal then one does not have to go beyond the Shaukat Khanum Cancer hospitals, some of the most successful ventures the world over.

Imran Khan has a vision. He harnesses remarkable energy, resilience and intelligence. He looks at the long-term impact. Mr. Khan has very rightly pointed out that countries need to support human development, not just infrastructure. His investment in the education system in in KPK bears witness to this. The KPK assembly passed a bill last year that would allow government to act against those parents who stop kids from going into school. Figures that had been put out by Alif Ailaan show that 9 of the 10 top districts are in KPK; only 1 is in Punjab. In the same survey for 2016, 9 of top 10 were from Punjab; none from KPK. This is a great achievement in just a year by PTI government in KPK in the critical field of education.

Issues which other parties have either ignored completely or sidelined have always been present in all of Mr. Khan’s rhetoric. He has always focused on social reforms which have important implications. The environment was a priority on the party’s manifesto. According to his latest speech, his party plans to plant 10 billion trees across Pakistan. Mr. Khan has also vowed to introduce a health insurance system modeled on the ‘Sehat Sahulat’ card in Khyber Pakhtunkhwa for the poor across Pakistan.

Reforming the police has always been a big challenge in Pakistan. The day when the KPK Assembly passed the K-P Police Act of 2017 was a historic moment as it was Pakistan’s first-ever provincial legislation related to the police. Credit goes to the PTI provincial government for adhering to their police reforms agenda and introducing the legislation to make the police operationally autonomous, politically neutral and democratically controlled. Hence, Imran Khan successfully depoliticized the Khyber Pakhtunkhwa police. If the same policies are applied to the whole country it could bring tantamount change.

The Pakistan debt trap is very real. While other parties portray how successful the present government has been in reducing debts, Mr. Khan gets straight to the point and talks about the depravity of the debt situation Pakistan is immersed in. Every single Pakistani is in debt Mr. Khan says. Acknowledging the problem is always the first step towards a solution. Mr. Khan is the only leader who has done this which makes him an ideal leader in that respect.

Most importantly, Mr. Khan raised political engagement. He convinced people to leave their homes and actually vote. While these did not translate into a win but nonetheless, he at least made a difference on the opposition bench. One of the main promises of Mr. Khan’s change agenda was to sweep away the rampant corruption plaguing Pakistani politics, and while the battle is not yet won, at least Pakistanis can now say proudly that they are on the trajectory towards achieving that.

At the end of the day, it will be a neck-and-neck race. Mr. Khan will probably occupy the opposition benches again. After all generational politics still seem to be the order of the day in Pakistan. Yet it does not matter. Mr. Khan or as he is fondly called IK or Kaptaan is a political lion. It is only a matter of time until he gets his chance.

Arhama Siddiqa is a Research Fellow at the Institute of Strategic Studies, Islamabad, Pakistan.  Image Credit: CC by Wikipedia Commons.

The decay of Taiwan’s democracy?
India's diplomacy must adapt in the Trump era