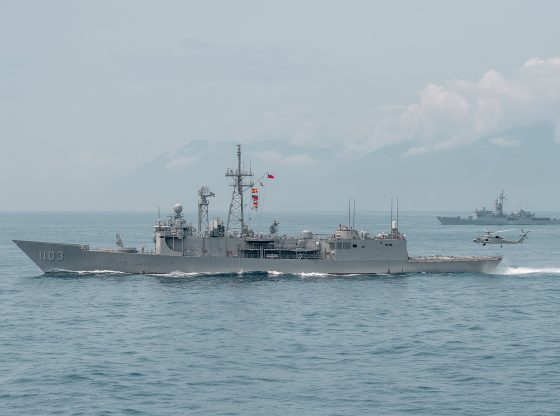 Last month, the Ministry of National Defence tapped CSBC Corp, who previously produced the 12-vessel Ching Chiang-class of fast attack missile craft, to produce two amphibious warships, to enter service in 2021. They are slated to be the first program in the Tsai administration’s effort to create a more effective indigenous shipbuilding industry.

Facing increasing Chinese naval power and, at times, unpredictable and ad-hoc defence acquisitions from the United States, President Tsai’s administration is hedging its bets on the creation of an indigenous shipbuilding program to face threats in the littoral areas of the South China Sea and the Taiwan Strait. Following the promises of then president-elect Tsai to revive the shipbuilding industry in 2016, the ROC Navy announced in June of that year a series of “12 new shipbuilding and force modernization programs covering a 23-year period at roughly $14.7 billion.”

But as of May 2018, the only new vessel to enter service in the interim has been a single Tuo Chiang-class missile corvette. Comparatively, China has in the meantime continued a robust shipbuilding program, launching four type 052D destroyers, two of the new type 055 destroyers, multiple frigates and corvettes, and, most importantly, its first domestically produced aircraft carrier. With such an obvious gap in naval production capability, what does this mean for Taiwan’s long-term ability to ensure the security of other offshore territories, such as Taiping Island?

It may seem at first to be a futile effort that is coming too late to be able to counterbalance Chinese power in the area, as ships are expensive and time-consuming to produce—even more so without a well-established shipbuilding industry— and programs regularly face delays and cancellations. However, in a hypothetical conflict, Taiwan would be on the defence in mostly shallow, littoral areas, and therefore would not need to match China’s numbers one-for-one with large guided missile destroyers. An asymmetrical strategy to fight a conflict of this type does not require as much industry backing it, and the ability to create such an industry and see it mature is very much within the Taiwanese government’s reach.

To get an idea of what production targets should be reached by the Tsai administration’s shipbuilding resolution, it is first necessary to take a look at what strategy would be employed in a conflict as part of the Sustainable Governance and Enduring Peace in the South China Sea doctrine.

Due to the large power imbalance between naval forces of both countries, Taiwan lacks the ability to exert sea control and must resort to sea denial: disruption of enemy fleet movements through deterrence and/or small-scale attacks so as to prevent enemy sea control and the landing of ground forces on ROC-held territory. A well-regarded 2009 study by the RAND corporation paints a good picture of this kind of conflict, a “quick victory invasion” scenario, where China attains air superiority and Taiwan resorts to using large numbers of land-based missiles to strike back at Chinese airfields and sink amphibious forces coming to land on the islands.

The ROC Navy has decided that it can supplement this land-based missile strategy with naval platforms, and the vessels most indicative of this position are the aforementioned Tuo Chiang-class missile corvettes. With one currently in active service and eleven more planned for construction, the class is designed with stealth features and a shallow draft allowing it to hug coastlines and evade detection, while using its large complement of sixteen anti-ship missiles to eliminate naval threats. When the first ship of the class was delivered, SCMP reported that the ROC Navy was also considering a larger frigate design if the class performs well, which would represent an expansion to the missile based sea denial strategy. The use of such a large number of missiles-per-platform coupled with efforts like stealth to increase survivability means the Navy will only need a relatively small number of vessels to destroy an amphibious assault force bearing down on the islands.

The successful completion of the Tuo Chiang has proved a good starting point for Taiwanese shipbuilders and the resumption of production with the remaining ships of the class will provide a valuable retention of capacity over the coming years while new projects are put into action. While the building of these corvettes does prove a certain baseline and a great starting point for the Tsai administration’s indigenous shipbuilding program, the upcoming Hung Yun Project amphibious ships will be a true milestone and important test for the program.

At a little more than seventeen-and-a-half times the displacement of the Tuo Chiang, each of these ships will weigh more than the entire missile corvette class. Coordinating the building of the ships will take much more skill and effort, so for observers the progress of their construction will be a watermark of success. For the Tsai administration, it will be valuable proof that Taiwan can create a sustainable indigenous naval procurement pipeline and meet the goals of providing the ROC Navy with a small and efficient fighting force to face asymmetric threats around the Taiwan Strait and South China Sea areas.

The Hung Yun Project ships are expected to enter service in 2021. In the defence realm, they are a chance to prove that Taiwan can stand more independently, something that confidence about has ebbed and flowed in the face of rising tensions across the Strait. Come 2021, we’ll have a clear picture of how able Taiwan will be to support itself in what could be a critical fight.

Andrew Maxey is a recent graduate of the Department of Asian Studies at the University of Texas at Austin. He is currently working as a Market Research Analysis Team Leader for Blackstone Texas. Image credit: CC by Office of the President of the Republic of Taiwan/Flickr.