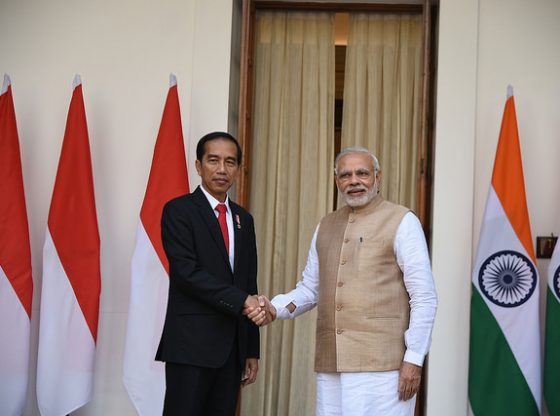 Despite their proximity, physical and cultural, the strategic distance between Delhi and Jakarta has been incredibly vast. Barring a brief moment in the mid 20th century, when anti-colonial solidarity brought them together, modern India and Indonesia have barely figured in each other’s mental maps.

Efforts in the early 21st century to end this estrangement have only produced meagre results. Might Prime Minister Narendra Modi’s visit to Indonesia next week change the fortunes of the bilateral relationship? Modi and the Indonesian President Joko ‘Jokowi’ Widodo have two things going for them.

One is the increasing self-awareness in Delhi and Jakarta of their growing regional and international weight. India and Indonesia are slowly but surely breaking out of the foreign policy mindsets shaped for long by non-alignment. The other is the new maritime impulse shaping the worldview of Delhi and Jakarta amidst an extraordinary power shift in Asia and its waters.

For generations of the Indian elite, any reference to Indonesia triggered nostalgia for the heady days of anti-imperialism and third worldism marked by the Bandung conference in April 1955. Unfortunately, there has been little else. The Bandung political metaphor had, of course, collapsed by the end of the 1950s. Intense friendship between Delhi and Jakarta turned into mild hostility in the early 1960s. After that the two sides settled down to an extended period of mutual neglect. A variety of internal, regional and global political developments widened the political gulf between India and Indonesia.

Underlying the enthusiasm for the Indo-Pacific in Delhi and Jakarta is a deeper change in both nations. Both of them have begun to rediscover their long-neglected maritime destiny.

If the domestic threat from Communism drove Jakarta decisively to the right from the late 1960s, Delhi entered into a prolonged dalliance with left wing politics and economics. After Bandung, India turned its back on Asia and focused on the non-aligned movement. Jakarta moved towards the minor variant of Asianism in South East Asia.

India drifted towards a de-facto alliance with the Soviet Union, Indonesia feared Communist Russia and emphasised partnerships with the US and Japan. The end of the Cold War saw frequent efforts at constructing a substantive partnership between Delhi and Jakarta. India’s economic liberalisation and the Look East Policy certainly triggered ASEAN’s interest in India. To be sure, Delhi and Jakarta talked the talk on building a strategic partnership, but could not walk the walk.

All that could be changing, though, as India and Indonesia revise their self-image and reimagine their place in the world. At the heart of this transformation is the change in their economic weight. With its GDP at $2.6 trillion, India is the fifth largest economy in nominal terms and the third biggest in PPP. Delhi under Modi has begun to see itself as a “leading power”. Although the goal is an aspirational one at this point, India is increasingly confident of its potential to shape its external environment.

This is equally true of Indonesia. Its GDP has crossed the one trillion dollar mark last year and today it ranks 16th in nominal terms and seventh if we take the PPP as the measure. With a population of nearly 260 million, Indonesia is the world’s largest Islamic nation. Since the late 1990s, Indonesia has consolidated itself as a democracy. Although it was the largest country in South East Asia, Indonesia had lowered its profile all these decades in order to make a success of South East Asian regionalism under the ASEAN. As its potential for a larger regional and global role comes into view, Jakarta is looking to complement the centrality of ASEAN with a larger vision of the Indo-Pacific, a geopolitical construct that India too has adopted.

If the idea of Asia drew Delhi and Jakarta close in the 1950s, it might well be the Indo-Pacific that will provide the framework for long overdue strategic re-engagement. That there is no territorial conflict between the two nations — at a moment when maritime disputes have taken centrestage — is of much value for the re-engagement. Even more important is the eagerness of both Delhi and Jakarta to look beyond their immediate neighbourhood and play a larger role in promoting peace and prosperity in their extended neighbourhood — the Indo-Pacific.

Underlying the enthusiasm for the Indo-Pacific in Delhi and Jakarta is a deeper change in both nations. Both of them have begun to rediscover their long-neglected maritime destiny. Prolonged inward economic orientation and border disputes in the north west and the north meant India had no time for its seas in the 20th century. After two-and-a-half decades of reform that has globalised the Indian economy, Delhi is paying more attention to maritime issues.

With thousands of islands, Indonesia is a massive archipelagic nation. But Jakarta until recently saw no reason to think maritime. The benign external environment secured by the United States meant Jakarta could devote most of its energies on internal territorial consolidation. Now, as the Asian waters open up to great power contestation, Jakarta can no longer remain sea blind. A little over three years ago, President Jokowi unveiled the ambition to turn Indonesia into a “global maritime fulcrum” by taking advantage of its special geographic position as the land bridge and sea link between the Indian and Pacific Oceans.

As they respond to the long-ignored maritime imperative, Delhi and Jakarta may have finally found an anchor for their strategic partnership. Although India and Indonesia have a shared sea frontier in the Indian Ocean, there was little maritime business between the two. Today, Modi and Jokowi have the opportunity to build a peaceful and prosperous “maritime mandala” in the heart of the Indo-Pacific through a number of steps. These include developing shipping links, building new ports, promoting a blue economy in the Andaman Sea, and advancing cooperative security framework for the Malacca Straits and the Bay of Bengal.

C. Raja Mohan is the director of Carnegie India. This article was first published on The Indian Express and has been reposted with permission of the author. He tweets @MohanCRaja. Image credit: CC by Indian Ministry of External Affairs/Flickr.