The case for closer India-Indonesia ties 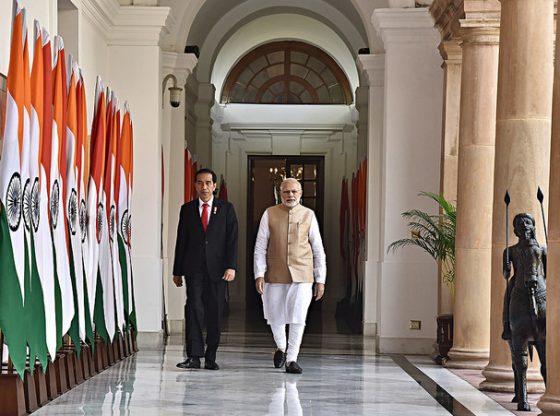 Prime Minister Narendra Modi’s visit to Indonesia (May 29-31) will seek to review and infuse high-level political traction to the consensus arrived at during Indonesian President Joko Widodo’s visit to Delhi in December 2016. At the time, a comprehensive joint statement identified a wide spectrum of areas for cooperation and engagement and it is understood that the current Modi visit will focus on defence ties, port infrastructure, connectivity and skill development.

Summit-level visits between India and Indonesia have been few and the 2016 Jokowi visit took place after a gap of five years. This does little justice to the vast potential that this bilateral contains, both in terms of a historical linkage that goes back by a millennium and more, and to the current complementary possibilities of mutually beneficial cooperation that are often obscured.

Indonesia is the largest nation in the ten member ASEAN and the heavyweight by way of population (266 million), GDP (one trillion US $) and has the distinction of being home to the world’s largest Muslim population. Yet, Indonesia nurtures a unique template of accommodating various religions in an ethos of tolerance and accommodation and sees no contradiction in revering Hindu epics such as the Ramayana and Mahabharata.

Both nations have a certain correspondence about maritime security and despite their contrasting geographies (Indonesia is an archipelagic nation, comprising about 18,000 islands, while India is a peninsular nation extending into the Indian Ocean) some challenges are similar

The Cold War and military rule in Jakarta constrained bilateral ties and only after democracy progressively took root in Indonesia has the relationship become more active. However, Indonesia has received only episodic attention by Delhi and to the credit of PM Modi, who has energised India’s ‘Look East’ policy, since assuming office (all the ASEAN leaders were at the Republic Day parade in January 2018), this will be his third substantive engagement with President Jokowi in less than two years.

In the defence sector, the maritime domain is a natural choice and in the December 2016 statement, the two leaders: “highlighted the importance of the maritime domain to their respective countries, the surrounding regions, and the world. They pledged to deepen their maritime cooperation, and to this end, issued a separate ‘Statement on Maritime Cooperation’ (that) encompasses a broad range of fields, including: maritime security, maritime industry, maritime safety and navigation, and other areas of bilateral cooperation identified by both countries.”

Both nations have a certain correspondence about maritime security and despite their contrasting geographies (Indonesia is an archipelagic nation, comprising about 18,000 islands, while India is a peninsular nation extending into the Indian Ocean) some challenges are similar. These include piracy, criminality at sea, illegal fishing and fear post Mumbai 2008 attack that every maritime nation has, namely the deep seated anxiety that terrorist groups could breach a poorly guarded coastline.

At the macro level, the regional maritime grid, and more specifically the creeping assertiveness of China, is an element of concern for both India and Indonesia, though it is differently articulated.  Jakarta has voiced its reservations about the Chinese South China Sea takeover in a muted manner and will stay within the ASEAN consensus on this issue. Thus, it is unlikely that Jakarta will be inclined to join any Quad like naval grouping, though it must be added that this nascent entity has been put on the backburner by India.

Both Modi and Jokowi have given high priority to maritime domain in their domestic policies. The former advocates SAGAR (security and growth for all in the region, namely the Indian Ocean), while the latter highlights Indonesia’s identity as the maritime fulcrum of the Indo-Pacific region.  Preparatory to the Modi visit, Jakarta has offered the port of Sabang in north Sumatra for development to India and the proximity to the critical Malacca Strait will be noted by analysts in New Delhi and Beijing alike.

The challenge and opportunity for both leaders will be to institutionalise the cooperation in this domain in an innovative and purposeful manner, such that it has a policy continuity that goes beyond their respective electoral fortunes.

India has made commendable progress in extending its MDA (maritime domain awareness) capability with its smaller island neighbours and this could be suitably scaled up and the know-how shared with Jakarta in a manner that suits its regional politics and geography.

India and Indonesia are both struggling with their indigenous defence manufacturing capabilities and in the short-term, Delhi will not be able to offer a viable option to Jakarta’s traditional import options that include the UK, USA and China. Where India has an edge is in providing training and sharing best practices in the naval/coast guard skillset.

India’s naval credibility has been burnished after the December 2004 tsunami that ravaged South East Asia, but the potential for initiating a comprehensive and sustained military diplomacy outreach as part of the Indian Look/Act East policy has eluded Raisina Hill. One capability of India, naval hydrography (making charts or maritime maps ) is a specialised niche that is globally acknowledged and could be offered to select nations. Yet, India has not been able to astutely add this kind of professionalism to its military diplomacy basket.

India may not be able to export military inventory or hardware to its neighbours in the manner that China does, but it has a training-cum-capacity-building profile (software) that is internationally acknowledged, but alas, domestically ignored.

The Modi visit to Indonesia, and later Singapore, could be an opportunity for Delhi and the tenaciously insular Indian defence ministry to add directivity, content and traction to India’s long-neglected maritime/ naval diplomacy. The Swaraj-Sitharaman combine ought to offer the PM substantive and appropriately-harmonised policy options, which can be carried forward by the next government.

C Uday Bhaskar is a retired Commodore in the Indian Navy and currently serves at the Director, Society for Policy Studies (SPS), New Delhi. He tweets at @theUdayB. This article was first published on DNA India and has been republished with the permission of the author. Image credit: by Indian Ministry of External Affairs/Flickr.