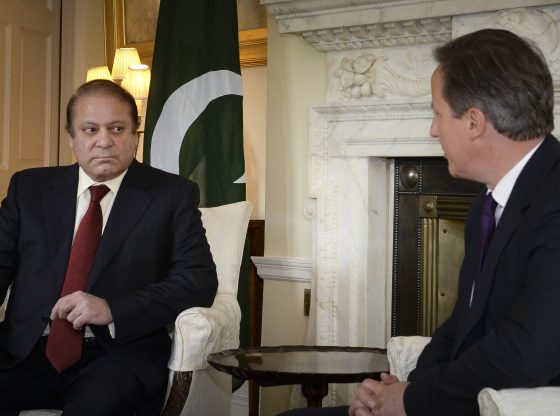 Former Prime Minister Nawaz Sharif, who had to resign from the post in July 2017, and then was disqualified from holding any government position for life, has yet again ruffled feathers with his rather bold remarks. Sharif in an interview to the Dawn Newspaper stated:

“Militant organisations are active. Call them non-state actors, should we allow them to cross the border and kill 150 people in Mumbai? Explain it to me. Why can’t we complete the trial?”

The Indian media was predictably quick to react to his remark. The former PM’s statement also created an uproar in Pakistan, with many accusing Nawaz of being an Indian agent.

Sharif’s political obituary has been written in the past, but he has bounced back and proved to be a survivor.

A National Security Council meeting was even convened in Islamabad to discuss this issue. The meeting was attended by top political leaders as well as members of Pakistan’s security establishment. It criticised Sharif’s statement for not being factually correct and  blamed India for the delays in the Mumbai trial.

‘Besides many other refusals during the investigation, the denial of access to the principal accused, Ajmal Qasab, and his extraordinarily hurried execution became the core impediment in the finalisation of the trial’.

Sharif’s brother Shahbaz Sharif, currently Chief Minister of Punjab and the party’s PM candidate for the upcoming election, held a meeting with PML-N parliamentarians. All these parliamentarians said that the former PM’s remarks had caused them immense embarrassment, and could mar their electoral prospects. Shahbaz while defending his brother, said that in future he would advise Nawaz not to speak on sensitive issues without consulting other party members.

Sharif’s troubles seem to be never ending. A few days before this, Sharif had been accused by Pakistan’s National Accountability Bureau of laundering a little less than $4.9 billion (USD) to India, based on a report of the World Bank.

The World Bank was of course quick to issue a denial, saying:

“In the past day, there have been media reports citing the World Bank’s Remittances and Migration Report of 2016. These media reports were incorrect. The report does not include any mention of money laundering nor does it name any individuals,”

As well as his remarks on the Mumbai attacks, he also commented on the creation of Bangladesh in January 2018. Sharif commented on the ill treatment of Sheikh Mujibur Rehman and blamed the Establishment:

‘[Former Bangladesh prime minister] Sheikh Mujibur Rehman was not a rebel, but was made into one,..The Bengalis had a central role in the effort to create Pakistan, but we did not treat them well and separated them from us.’

This is truly unprecedented for a political leader from Pakistan.

Sharif’s remarks are interesting because he has been accused of being close to Islamic hardliners, including Hafiz Saeed (co-founder of LeT and founder of JuD) one of the main masterminds of the Mumbai terror attacks. Of late however ties have soured, with Saeed criticizing Sharif for being soft on India.

Nawaz Sharif, has played a crucial role in reshaping Pakistan’s political narrative over the past two decades.  Although he was initiated into politics by a military dictator, General Zia-Ul-Haq, his ties with the army have deteriorated. Since the 1990s, the former PM has been pitching for better ties with India, and the need for moving out of a security mindset.

In 1997, he won a thumping majority while fighting the election on the plank of better ties with India. Punjab had been the citadel of anti-Indian sentiment, and for the PML-N to win the province was a big achievement. However, a few months after the Lahore visit of Atal Bihari Vajpayee in 1999 and the Kargil conflict, Sharif was removed in a coup by General Pervez Musharraf.

Following his removal Sharif committed himself to the restoration of democracy and better ties with India. His unflinching support for the Lawyer’s Movement also resulted in a shift of narrative in Pakistan’s most populous province Punjab, which was considered to be pro-Army. The Lawyer’s Movement resulted in a significant shift. When the restoration of democracy took place in 2008, Sharif made two important contributions. First, he pitched for better ties with India, and in spite of withdrawing support from the PPP Government headed by Asif Ali Zardari, he did not destabilise the government and allowed the government to complete its tenure.

Before being elected as PM in 2013, Sharif had also sought an enquiry into the Kargil Conflict:

“I think such issues certainly need investigation, including the one which happened in Kargil. I think an inquiry commission should be held on Kargil as well,”

Sharif’s third term as PM witnessed a power struggle between him and the Pakistan military. In the first few months after his swearing in, tensions with India rose across the Line of Control, and on the eve of his meeting with Indian PM, Dr Manmohan Singh in New York, there was a terror attack in Jammu.

Within one year of taking over as PM, he had to face protests by Tahir Ul Qadri and the PTI which were orchestrated by the Establishment. After the Panama paper leaks in 2016, his position continued to weaken before the Supreme Court forced him to resign in July 2017.

While it is easy to dub Sharif as an agent, he is a pragmatic businessman who realizes the benefit of better ties with India, rather than being perpetually trapped in a zero-sum narrative. He also realizes the necessity for re-shaping the civil-military narrative. Although he has upped the ante on Kashmir on more than one occasion his pro-democracy stance and overall vision for South Asia makes him the best bet for Pakistan.

Imran Khan: The new favourite of the establishment

Imran Khan, supremo of the PTI, could win the next elections with the backing of the Establishment. Only recently for instance, Imran Khan praised:

“The current military chief, Gen Bajwa, is probably the most pro-democratic man we have ever seen.”

The Pakistan army has been trying to change its image, and been sending overtures to India (though it has also been lending support to Hafiz Saeed’s political outfit). It remains to be seen how the next elections pan out, whether Nawaz Sharif comes to power or not, he deserves kudos for taking on the army, and trying to reshape the narrative in Pakistan vis-à-vis the neighborhood. It is for these reasons that the past two decades have resulted in Sharif’s stature rising from a Punjab centric leader to a pan Pakistan leader.

In conclusion, Sharif’s political obituary has been written in the past, but he has bounced back and proved to be a survivor. Sharif’s future is not just important for Pakistan, but equally important for the region. The weakening of a popular leader, one committed to a more integrated South Asia, is in no one’s interest.

The challenges for China’s water management
The Tashkent Summit & Afghanistan: Too Many Cooks Spoil the Broth