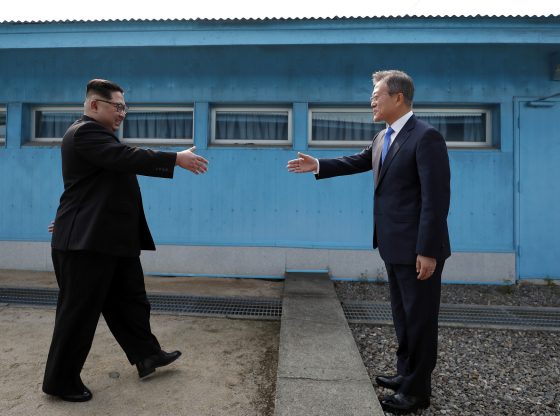 On 24 May, President Trump called off the planned 12 June summit with Chairman Kim Jong-un of North Korea, to be held in Singapore, due to perceived hostility on the part of Pyongyang. Having invested much political and reputational capital on rapprochement with North Korea, where a successful Trump-Kim meeting would tremendously benefit inter-Korean relations, and with the Kim regime still privately in favour of the earlier planned summit, both President Moon of South Korea and Kim reached out to each other and within 24 hours, arranged for their second summit meeting of 2018 on 26 May at the Northern side of the demilitarised zone separating both Koreas.

This second summit was arranged at short notice, in contrast with the first summit on 27 April which took several weeks to organise. It indicates much improvement in North-South relations, but also reveals joint inter-Korean diplomatic crisis management.

Middle powers are capable of achieving crucial diplomatic objectives and at short notice to boot. They do not have to depend on the great powers and can even influence the latter by their efforts – Liang Tuang Nah

What Pyongyang and Seoul managed to achieve

During this second summit, Kim enunciated his “fixed will” to meet with Trump on 12 June as earlier agreed upon, and in a press release the following day on 27 May, Moon announced that Kim re-affirmed the desire to completely denuclearise the Korean peninsula. Additionally, both sides agreed that their top civilian and military officials should meet on 1 June to discuss reunions for families separated by the 1950-53 Korean War, along with reducing military tensions. Moreover, it can be argued that Pyongyang unilaterally showed indirect sincerity supporting the 12 June U.S.-DPRK summit by dismantling the North’s Punggye-ri nuclear test site with international journalists present as witnesses.

As a result of this hasty crisis management diplomacy between Seoul and Pyongyang, as well as greater apparent negotiability displayed by the North Korean foreign ministry towards the U.S. state department in the immediate aftermath of Trump’s summit cancellation, it now appears that Washington has been convinced about the Kim regime’s earnestness and sincerity for honest nuclear disarmament negotiations. Consequently, recent news reports indicate that both the U.S. and DPRK have dispatched senior diplomats to Singapore, to prepare for the meeting of their respective heads of state. Thus, for all intents and purposes, the 12 June Trump-Kim summit will proceed as planned. Hence, it can be seen that when middle powers are willing to exhibit flexibility and are determined to achieve diplomatic or strategic objectives, they can succeed while concurrently influencing a great power such as America.

Indeed, this phenomena is not unique or uncommon in the field of nuclear disarmament. The process by which Ukraine relinquished the nuclear arms it inherited from the collapse of the USSR, between 1991 to 1996, provides an example. Despite spirited denuclearisation debates in the Ukrainian parliament, and strong bargaining with the U.S. and Russia for compensation and security guarantees, counter-proliferation-minded Ukrainian leaders worked unofficially in conjunction with their Russian and U.S. counterparts in establishing technical processes for deactivating Ukrainian nuclear warheads, thereafter shipping them to Russia, along with the specifics of missile and missile launcher dismantlement.

In early 1993, the Ukrainians stated their willingness to discuss de-targeting and the removal of both the guidance systems as well as warheads from their nuclear missiles, while offering the Americans the unilateral dismantlement of some of the former’s intercontinental ballistic missiles. As these technical discussions remained out of the Ukrainian parliament’s purview, these helped promote progress, sidestepping political gridlock. Comparing the Ukrainian experience to the North Korean case, it can be seen that the willingness to work or compromise outside of formal negotiations with great powers still allows middle powers to achieve secondary diplomatic or disarmament objectives.

What Seoul and Pyongyang can do to maintain momentum

Lastly, inasmuch as the regional and even international community hopes for a “grand bargain” to be struck between Trump and Kim, if and when they meet in Singapore on 12 June, a mild or watered-down agreement, or even a summit failure, need not mean the end of North Korean denuclearisation and the stagnation of inter-Korean relations.

Progress is possible if both the Moon administration and Kim regime display the same will and determination shown with their second summit. For instance, a de facto stable peace can be achieved via an unofficial agreement inked between Moon and Kim. If Kim is prepared to play his part, military adventurism and state sponsored terrorism from the North will become a thing of the past. Furthermore, if Pyongyang follows up with an irreversible demonstration of nuclear disarmament such as the surrendering of a few long ranged nuclear tipped missiles to the International Atomic Energy Agency or China, Kim and Moon could then make the case for a relaxation of UN-mandated economic sanctions against the DPRK. On Seoul’s part, such positive actions from the North will provide justification for any significant shipments of humanitarian aid from the ROK to the DPRK. All of this might well provide reciprocal momentum for a virtuous denuclearisation-compensation cycle that works independently of U.S. involvement.

Liang Tuang Nah, PhD is a Research Fellow at the Institute of Defence and Strategic Studies, a constituent unit of the S. Rajaratnam School of International Studies (RSIS), Nanyang Technological University. Image Credit: CC by Republic of Korea/Flickr.