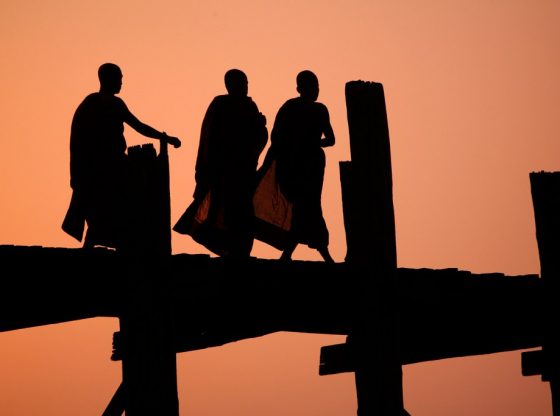 When discussing religion and violence in Southeast Asia, the first concept that usually comes to mind is that of jihad or ‘holy war’,  waged by Islamist movements such as the rather new Jamaah Ansharud Daulah (JAD) or the older and better-known Jemaah Islamiyah (JI) in Indonesia. This makes eminent sense – and so does the attempt to find ways to combat this Islamist threat – against the backdrop of the recent JAD suicide attacks in Surabaya/Indonesia, the relentless activities of Islamist ‘preachers of hate’, and the steady trickle of Southeast Asian ISIS fighters returning home to their countries of origin after the defeat of ISIS in the Middle East.

What still finds far less attention, however, is the gradual emergence of a militant (Theravāda) Buddhism, propagated by extremist monks acting as the equivalents of the Islamist ‘preachers of hate’. The most telling example in Southeast Asia at the moment is Burma (Myanmar). Here, it is the Muslims who are targeted by the state on the one hand, and extremist monks and their lay followers on the other.

What strikes me as new however is that an ominous ‘action-reaction’ pattern now has emerged that might have repercussions not only for Burma but for Southeast Asia as a whole.

Quite instructive for the role that these extremist monks are playing when it comes to instigating and nurturing anti-Muslim hate and violence are the sermons of Burmese monk Ashin Wirathu. In his speeches he regularly argues that the Muslims “are breeding so fast, and they are stealing our women, raping them […]. They would like to occupy our country, but I won’t let them. We must keep Myanmar Buddhist.” In his opinion, “about 90% of Muslims in Burma are radical, bad people.” He repeats this message quite frequently, and also his conviction that Burmese Buddhists “are being raped in every town, being sexually harassed in every town, ganged up and bullied in every town.”

The popular belief he draws on, that Muslims in general are prone to committing wanton and unprovoked acts of violence against unsuspecting Buddhists, is further nurtured by rumours of alleged crimes that Muslims have carried out, with scores of gory pictures of slain monks and laypeople exhibited on temple walls and quickly disseminated via social media for good measure. A further popular belief is that the Muslim minority in Burma, in particular the Rohingya who are a sizeable minority of 42 percent in Burma’s Rakhine State, are nothing but an avant-garde of the implacable and numerous Muslim enemies across the border to Bangladesh, intent on wiping out Buddhism. In Ashin Wirathu’s words, “Our religion is not the only thing under threat. The whole country is. Just as they established Pakistan and Bangladesh, in the 2010s they’re stepping up efforts to establish an Islamic state in Burma. So the whole country is now under threat, not only our faith.”

The conviction that Buddhism is under siege by an implacable enemy allows Ashin Wirathu and like-minded monks to justify what they see as defensive violence. After all, even the extremist monks concede that an offensive use of violence is not permissible within Buddhism. But they emphasise that like everybody else, Buddhist communities have the right to self-defence, especially if and when the survival of the religion is at stake.

As one Burmese lay follower pointed out to me in response to my short article in the Conversation, “Buddhism is not a suicidal utopianism”. I would like to point out that this line of argumentation is actually not new: as soon as Buddhist polities came into being from the time of Emperor Ashoka Maurya onwards, the monkhood, as one of the pillars of the state, had to devise ways to justify their ruler’s resort to violence against internal and external enemies. Anti-Muslim violence is not new either, nor is the feeling of being under siege. The anti-Indian race riots of July and August 1938, for example, also revolved at least partially around the Burmese Buddhist fear of being marginalised by a persistent Indo-Muslim labour migration, encouraged by the British colonial government. And just like today, firebrand monks acted as instigators and catalysts of these riots.

What strikes me as new however is that an ominous ‘action-reaction’ pattern now has emerged that might have repercussions not only for Burma but for Southeast Asia as a whole.

According to the Buddha’s warning that “killing, you gain your killer, conquering, you gain the one who will conquer you,” an organisation known as the Arakan Rohingya Salvation Army (ARSA) made headlines for the first time in October 2016 by way of a coordinated attack of about 300 to 400 activists on Burmese police posts at the Bangladesh border, and then again in August 2017 with another coordinated attack on police posts as well as a Burmese army base. ARSA is not the first armed opposition of the Rohingya Muslims. But it is the most effective one so far, with connections to Saudi Arabia, and possible links to Islamist movements outside of Burma including Al Qaeda and ISIS who already responded to the persecution of the Muslim Rohingya. In December 2017, an Al Qaeda in the Indian Subcontinent (AQIS) spokesman urged fellow Muslims to assist their Rohingya brethren by joining ARSA’s guerrilla campaign, while the pro-ISIS Wafa Media Foundation called upon their followers to carry their jihad into Burma via Bangladesh.

Carrying the jihad into Burma might then be followed by carrying it into the deep south of Thailand which is the scene of a Muslim insurgency that, since 2001, has resulted in the death of about 8,000 people, and also in the emergence of militant monks calling for retaliation, including the torching of mosques. Not surprisingly, some observers of the Southeast Asian scene fear that a further spread of these Buddhist-Muslim clashes in Burma could have far-reaching consequences for the region, for example by creating a fissure between the Muslim-majority and the Buddhist-majority states of ASEAN.

In my opinion, this still seems to be a bit alarmist at the moment. But it would not go amiss to pay more attention to the Buddhist preachers of hate and their activities as well, instead of just focusing on the ‘usual suspects’ Al Qaeda and ISIS. After all, as the Lord Buddha said, violence begets violence…