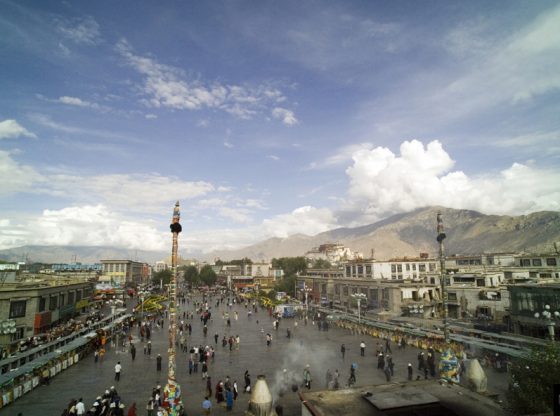 In October 1950, the People’s Liberation Army (PLA) entered Eastern Tibet with the objective of ‘liberating’ the region. The Tibetans, who for centuries had lived in beatific seclusion, could not really understand from what they needed to be ‘liberated’; a large percentage of the population lived as Buddhist monks and nuns in thousands of monasteries, seeking the Great Liberation. It soon turned out that the Communist ‘liberation’ was very different from the one advocated by Gautama Buddha in the plains of North India some 2500 years earlier. Mao and his colleagues wanted to ‘reform’ a so-called feudal society.

When the Communist leadership tried to force their ‘reforms’ on the Khampas, the inhabitants of Eastern Tibet, the latter immediately revolted. It resulted in tens of thousands of them being killed. Monasteries were bombed, ‘rebels’ machine-gunned: religion was a ‘poison’, as per Mao’s words, it had to be eradicated. One question is often asked, has China changed over the last 60 years or has it remained the same? China is indeed today a different nation; it has laws, rules and regulations, even for religious practices.

In November 2017, the Chinese State Administration for Religious Affairs published a set of updated regulations dealing with religious issues (they have come into force in February 2018). Some of the directives are aimed at monitoring the over-commercialization of Buddhism and Taoism. The South China Morning Post said that China had decided to ban commercialization of Buddhist and Taoist activities to tighten its grip on religion: “local cadres have been specifically barred from promoting and profiting from religious activities in the name of fostering economic development. Temples in scenic spots cannot overcharge tourists for entry, while they are banned from building any new large outdoor religious statues.” The stated objective of these regulations was to ‘protect citizens’ freedom of religious belief’.

But some religious leaders in China, such as Pastor Wang Yi of Early Rain Church in Sichuan saw a deeper scheme: “the government has no authority to direct or examine religious groups and religious activities in their doctrinal teaching and governing or to limit citizens religious activity to the time and location it decides,” he stated. Indeed, under the revised Regulations, religious affairs are controlled in minutest details by the State (read the Communist Party).

in Tibet, the Chinese authorities are closely monitoring the religious observances during the holy month of Saga Dawa, forbidding government workers and students from participating in traditional gatherings.

How does this translate in Tibet? In the recent months and years, there has been in a tightening of State control over religious institutions. Further, most of the monasteries have now become tourist attractions under the control of local administration. Monks are mostly in place as a showcase for the millions of Han tourists visiting the Roof of the World (26 million in 2017). Another dichotomy is reflected in the case of the Serthar Buddhist Institute in Larung Gar in Sichuan’s Kardzi prefecture. The Institute was founded by a charismatic Lama, Khenpo Jigme Phuntsok in 1980 to help revive Buddhist scholarship and meditation. In the early 2000s, it housed the largest concentration of monks and nuns in Tibetan areas …including nearly 1,000 Han Chinese students. In 2016, Radio Free Asia (RFA) reported that Beijing had decided to destroy large sections of a monastery: “Massive cuts are being planned for the number of monks and nuns allowed to live at a large Buddhist study centre.”

It had perhaps become too dangerous for the Communist Party that the monastery enjoyed a great popularity among Chinese; between 20,000 and 30,000 monks and nuns, (a large proportion from the mainland) had joined the institute over the years. The Diplomat described the situation: “In June 2016, the Chinese government in Beijing issued an order that stated the site had become overcrowded and its population had to be reduced to a maximum of 5,000 by October 2017. Within weeks, work teams descended on the peaceful community and began tearing down people’s homes, reducing cabins to nothing more than splintered wood and shattered glass. The owners were forced to sign documents agreeing not to return to the area again and to ‘uphold the unity of the nation’.”

China seems stuck between the ‘normality’, i.e. the rule of law on one side and the imposition of the Party’s diktats, on the other. Already in 2001, a similar process had occurred; The South China Morning Post then wrote: “Tibetan support groups and Chinese residents of a nearby town said the dismantling of homes at Serthar had started in June [2001] and many of the residents — once estimated at 6,000 to 7,000 — had been forced to leave.” But as a sphinx, Sethar had emerged again. A sign that all is not well in the field of religion in the Middle Kingdom is the fact that China does not hold the examination for the highest degree in Buddhist philosophy, the Geshe Larampa, in Tibet itself. On May 19, You Quan, minister of the United Front Work Department, a high functionary in the Party, distributed the certificates to the new graduates. During the function, You Quan emphasized that the Tibetan Buddhist community, the Sangha, “should thoroughly study and understand the Xi Jinping Thought on Socialism with Chinese Characteristics for a New Era, unswervingly adhere to correct political positions; firmly uphold national unity; positively adapt to developing trends of the current times; vigorously promote interpretations of Buddhist doctrines and make new contributions to the future inheritance and development of the Tibetan Buddhist tradition.”

The function took in the premises of the High-level Tibetan Buddhism College …in Beijing. For hundreds of years, the examinations were held in the Great Monasteries of Ganden, Drepung and Sera in the outskirts of Lhasa, why should they take now place in the Chinese capital? Simply because Beijing is nervous about the rise of religion in Tibet …and the Middle Kingdom. Another sign that religious freedom is not blooming, political training is regularly held for religious leaders. The Global Times mentioned, “Extensive training for religious priests is being launched at the local and central levels on core socialist values, patriotism and religious signification.” According to the tabloid, training is being organized by the Central Institute of Socialism, the Party Schools for non-Party members. The Global Times admitted: “The sinification of religions was highlighted in China’s newly revised regulation on religious affairs, which took effect in February.” The Institute has been holding this type of course for all major ‘Chinese’ religions including Buddhism, Catholicism, Protestantism and Islam.

In the meantime, in Tibet, the Chinese authorities are closely monitoring the religious observances during the holy month of Saga Dawa, forbidding government workers and students from participating in traditional gatherings. Radio Free Asia reported: “The Chinese authorities in Lhasa are ordering Tibetan government employees, schoolchildren, and their parents to avoid group religious activities during the holy month.… Even government retirees are being targeted by this ban on religious worship,” RFA’s source said. China may have greatly changed in the recent decades, but the freedom to practice one’s own religion still exist on paper only.

Born in France, Claude Arpi has settled in South India 42 years ago. He is the author of several books on Tibet, India-China and Indo-French relations. He presently holds the Field Marshal KM Cariappa Chair of Excellence from the United Service Institution of India. The views expressed here are his own and do not represent the United Service Institution. Image Credit: CC by Michael Rehfeldt/Flickr.