Playing the Long Game? The Politics of Religious Revival in China and Tibet 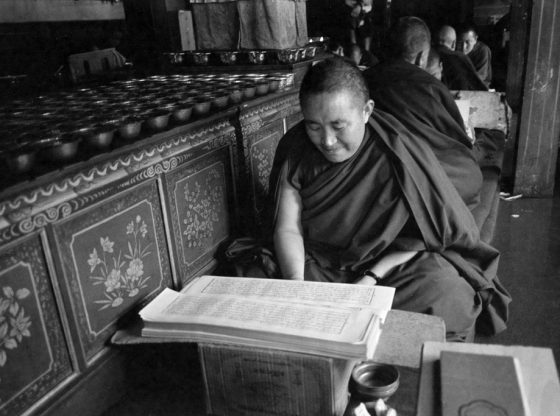 “Religion” in China has never fitted well into European conceptions of the topic. Certainly, getting any kind of statistical handle on religious populations in China has always been difficult. The Han Chinese, in particular, tend towards a pragmatic approach to religion and ritual, eschewing identity politics and communalism in favour of an approach that emphasises the daily struggle to ensure prosperity, longevity and good fortune. A family in southern China may regularly employ the services of Buddhist monks to perform funeral services, a Taoist fashi to correct certain aspects of the feng shui of their home, while maintaining an ancestral shrine, but at the same time count themselves as non-religious in a passing survey because they have no membership of any identifiable religious association. In this sense, “religion” (zongjiao) in governmental discourse rarely refers to any sense of popular or individual practice, but instead to public or private institutions that project authority and could feasibly sway public opinion or action. Zongjiao is the buildings built, the monasteries founded, the associations formed, and the texts printed. It is an approach to religion that has deeply affected the politics of the People’s Republic, especially when it comes to its restive western regions of Xinjiang and Tibet.

Chinese policy approaches to religion are in many ways a reflection of their approach to the economy: while itself exporting around the world, it is deeply suspicious of imports. Chinese state nationalism retains the deep memory of the nineteenth-century treaty ports, enforced capitulatory rights and the humiliations of the Opium Wars in the face of European and American colonialism. Just as incoming international companies find the PRC a difficult and challenging place to work for any prolonged period, restrictions on religion in the PRC are shaped by similar historical imperatives. Religious movements that are seen to be tainted by foreign influence, and worse foreign-based structures of authority, are objects of harsh and growing control by the state.

Islam, Catholicism and Tibetan Buddhism, above all others, have particularly felt the force of such suspicion and control, but for different reasons. While Protestant missionaries in China certainly face significant challenges, central state control of Catholicism has led to deep and effectively irreconcilable clashes of authority. Beijing’s insistence that Catholic bishops be appointed by the state-controlled Chinese Patriotic Catholic Association rather than the Vatican. The Holy See’s response to this has changed over time, from Pius XII’s threat to excommunicate any state-ordained bishops in the 1950s, to limited rapprochement under the present papacy. Inside China, popular resistance to the government has led to a growing number of “underground churches” across China, and at least one “do-it-yourself” bishop.

For the Chinese authorities, the answer to this challenge has been a long game: firstly, to swamp the Tibetan Plateau with massive infrastructural development in order to incorporate the region fully into the wider Chinese economy; secondly, to politically isolate the ageing Dalai Lama through a combination of economic largesse and heavy-handed diplomacy, while waiting for the man himself to die

In the restive Western province of Xinjiang, Muslim communities have seen an alarming rise in state control and surveillance over the last twenty years. The post-9/11 years gave Beijing ample opportunity to cast their troubles in Xinjiang as part and parcel of the War on Terror, a move that may ultimately prove to be a self-fulfilling prophecy. The confiscation of pre-2012 copies of the Qur’an last year over putative “extremist” content has led to accusations that new versions have been revised to include sections promoting public submission to national authorities and local law. In all of this, perceived threats to the territorial integrity of China have been intimately liked to a deep suspicion of imported authority.

However, it is in the PRC’s southwestern Tibetan provinces that the CCP had persistently faced its most chronic constitutional conundrum. The problem, in many regards, is simple. Beijing’s propaganda engine has always presented Tibet as an integral part of China, and thus that Tibetan Buddhism is, in effect, an indigenous Chinese religion; at the same time, since the ‘liberation’ of Central Tibet by Mao’s People’s Liberation Army in 1950, the PRC authorities have persistently failed to incorporate the Plateau’s deeply religious population into the ideological fold of PRC development. Worse, since his flight into exile in 1959, the Fourteenth Dalai Lama has managed to maintain a startling level of symbolic authority amongst Tibetans within Tibet from his hill station administration in the foothills of the Indian Himalaya and has succeeded in securing a solid international consensus on the moral grounds for the Tibetan cause.

For the Chinese authorities, the answer to this challenge has been a long game: firstly, to swamp the Tibetan Plateau with massive infrastructural development in order to incorporate the region fully into the wider Chinese economy; secondly, to politically isolate the ageing Dalai Lama through a combination of economic largesse and heavy-handed diplomacy, while waiting for the man himself to die; and finally, to ensure strict party control over “Living Buddhas” – the Tibetan Buddhist tradition of recognising the reincarnate of prominent religious teachers (of whom the Dalai Lama is the most influential, but still one amongst thousands). This would then legitimise Beijing’s own appointment of the next Dalai Lama, thus allowing Tibetan nationalism to sink beneath the waves of history.

This policy triumvirate is designed in effect to “cut the head off the snake”, a strategy dating back to the Third Party Forum on Tibet in the early 1990s. Beijing’s logic remains that Tibetan resistance to Chinese rule must have been orchestrated from Dharamsala, a logic based on a constitutional assumption – integral to Beijing’s thinking – that religious movements, inasmuch as they have political repercussions, only exist through a centralised structure of authority and institutions.

Whether this assumption is correct is very much up for grabs. Certainly, there is a deafening lack of evidence, despite Beijing’s assertions, that the protests and riots that swept across the Tibetan Plateau in 2008, or indeed the subsequent waves of self-immolations– both of which began with protests by Buddhist monks – were organised from afar. More than this, it is far from clear that the passing of the Dalai Lama, whenever that should happen, will mark the end of China’s problems in Tibet. Tibetan Buddhism itself has a long history of grassroots millenarian movements, and its structure is far more decentralised than many outside observers are inclined to think. The Dalai Lama, for all his authority, is no pope, and Buddhism has never espoused anything that even looks like a vow of obedience.

More than this, there are increasing signs that the battleground for Tibetan hearts and minds has gradually shifted away from the Dalai Lama as the principal bone of contention, and onto broader questions of cultural and religious rights. The most recent of these have revolved around the status of the Tibetan language, which has a strong religious heritage. Not only is its written form seen as a repository of Tibet’s vast religious corpus – one that has in large part been secured and recovered in the international sphere of the internet – but the script itself was originally created by Tibet’s first Buddhist emperor Songtsen Gampo, who founded the city of Lhasa around the Jokhang temple.

Nor is it necessarily a local ethnic issue: along with many other religious traditions, Tibetan Buddhism has become increasingly popular amongst China’s emerging middle class across the PRC. Perceived as more pristine and untainted by commercialism than its Chinese counterparts, Tibetan Buddhism is nonetheless also counted by many as an indigenous Chinese tradition, precisely because “Tibet has always been part of China”. As with much of the rhizomic regrowth of religion in China, these are developments that occur at the level of personal introductions and household preferences, far below the radar of Beijing’s high level political constitutional politics with the Dalai clique. What they look like in political terms only time will tell, and may be part of a longer game than even Beijing is used to.

Dr Martin A. Mills is Senior Lecturer in Anthropology at the University of Aberdeen, Scotland and Director of the Scottish Centre for Himalayan Research. He is the author of Identity, Ritual and State in Tibetan Buddhism: The Foundations of Authority in Gelukpa Monasticism (Routledge 2003). Image Credit: CC by ccdoh1/Flickr.

Islam in Xinjiang: “De-Extremification” or Violation of Religious Space?
Why Karnataka Voted the Way It Did