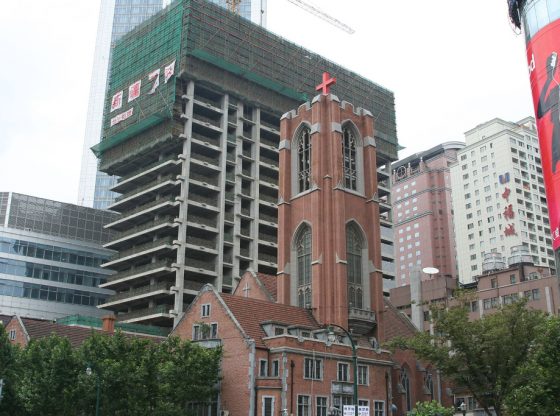 In April 2016, Xi Jinping chaired the National Religious Work Conference. It was the first time the CCP General Secretary chaired such a meeting since 2001 (Batke 2017). This Conference was a new step in the CCP’s religious affairs policy and eventually led to an updated “Regulation on religious affairs “, which went into effect at the beginning of 2018.

This new text stands largely in continuity with the People’s Republic of China’s (PRC) religious policy since the end of the Cultural Revolution and with the “Document 19 “ of 1982 which laid the basis of this policy. Though with this new text the Party-State mainly reemphasis its control over religious practice,  this control tends to take a renewed form: The Party-State now not only sets the limits of what is acceptable but also “actively guides” religion. At the 2016 meeting, Xi Jinping described what this “active guidance” implies: “to guide religious believers to love the motherland and people, to safeguard the unity of China, to obey and serve the interests of the Chinese nation, to support the leadership of the CCP and the socialist system, and stick to the path of socialism with Chinese characteristics; promote Chinese culture and integrate beliefs with Chinese culture, and contribute to the great rejuvenation of the Chinese nation”.

When Xi Jinping calls for the “integration of religious beliefs with Chinese culture”, he implicitly targets the religions perceived as foreign, Christianity and Islam, by opposition to Buddhism and Taoism, seen as indigenous. This differentiation reflects the inequality of treatment of different religions in China, as recently highlighted by Freedom House. Perceived as more of a political danger and vulnerable to “foreign infiltration”, Christianity and Islam are under tight control and are the target of a political campaign to sinicize them, by changing the content of religious preaching and religious education, as well as the architecture of mosques and churches.

The new regulation illustrates the Party-State’s use of laws and regulations to increase its control over religious practice. This “judicialization of religious activities”, as Rémi Castets describes it, also includes a number of local regulations. The Autonomous Region of Xinjiang, in particular, is a laboratory when it comes to developing new ways to strengthen political control over religion. In parallel to a massive securitization drive, the region has seen a proliferation of new religious management regulations in the past years. The Xinjiang Autonomous Region Religious Affairs Regulation came into effect in January 2015. It goes further than the national one in defining “extremist” and unlawful religious practices. Additional regulations to fight extremism came into effect in Xinjiang in April 2017. Practices seen as extremists, such as growing an “abnormal” beard or providing religious education to minors, are listed and can be the object of legal pursuit, as well as extra-judicial re-education. A network of re-education camps is, in fact, being established across Xinjiang, leading to the massive incarceration of religious followers.

The judicialization of religious practices is in line with the broader tendency in the PRC to increase legal control over social organizations, ranging from foreign NGOs to local caritative organizations. This strengthening of legal control at the service of the Party-State leads to the progressive disappearance of the grey areas in which social actors used to navigate, and which sometimes allowed them more autonomy. In the case of religion, a certain flexibility existed until now at the local level when it came to the religious education of minors, the religious practice of Party members, or the existence of informal places of worship. The latter is particularly relevant when internal migration led to new religious needs that the localities could not respond to. For instance, Muslims from northwest provinces massively migrated to eastern coastal cities which had none or very few mosques, and to fill this gap local authorities would partially accept the development of “house mosques” until recently.

A recent institutional reform further limits the space religious actors can navigate in. Earlier this year, the State Administration for Religious Affairs (SARA) was absorbed by the Party’s United Front Work Department (UFWD), which now directly controls ethnic and religious affairs. While this may not appear to be a significant reform, as SARA was de facto under UFWD’s supervision, it actually deprives religious actors of a key broker, especially at the local level. As I could witness in my own fieldwork, SARA’s staff regular interactions with religious actors often made them a key communication channel between them and the higher-ranked UFWD officials, to obtain authorizations, funding etc. The disappearance of this link will, therefore, further limit the religious actors’ negotiation options with the Party-State.

Overall, while the recent PRC White paper on religious affairs states that “normal religious belief” is protected by the State, the definition of what constitutes normal belief is extremely narrow. Moreover, Xi Jinping’s policy to actively guide religion prevents any accommodation or negotiation of this definition and therefore prevents citizens from worshipping in the ways they see as normal.

Jérôme Doyon is Departmental Lecturer at the University of Oxford School of Interdisciplinary Area Studies. He tweets at @doyon_jerome. Image Credit: CC by Evan HB/Flickr.