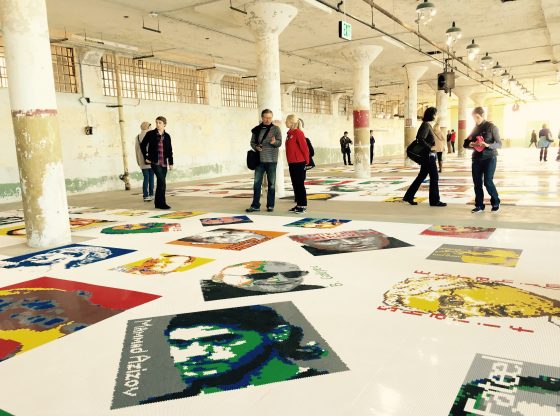 Schooled in the artistic use of readymade objects, Ai Weiwei’s brief sojourn in New York seems to have left its mark: working material is never raw material, it is already loaded with expectations and memories whose emotional resonance can speak directly of the conditions that it is the artist’s role to reveal. Weiwei’s readymades are especially resonant. To work in exhumed, ancient earthenware daubed in modern branding or in rebar mangled by an admixture of sublime natural force and bureaucratic malfeasance is to artistically transform readymade objects into forms of civic agitation. Like Duchamp and Warhol, Weiwei deals with cultural not just aesthetic questions, and then he goes further still by investigating the social and political possibilities of his practice: “Art” he argues in a film for London’s Tate Modern “is a tool to set up new questions, to create a basic structure which can be open to possibilities.” These possibilities are neither easily rendered nor comfortably encountered, and the structures do not carry answers, they are more like rabbit holes, leading who knows where.

In striving to create these structural openings there are arguable failures: his millennial “fuck off exhibition” with its puerile fingering comes to mind, as does his all-too bathetic echo of the drowned body of Alan Kurdi. Yet failure is necessary to the readymade method precisely because art, as he senses the practice, should refuse definitive answers and those who prefer them. The artist’s job is to jibe at and jockey with authority, to conjure and cajole audiences away from apathetic comforts, to conjecture on what might be otherwise: in short, it is to be what Nietzsche called untimely. And what makes art telling is the timeliness with which one is untimely. Using school children’s backpacks as he did in the wake of the Sichuan earthquake in 2008 when so many lost their lives under the falling masonry of  ‘tofu built’ schools, or more recently casting the forms of buoyancy aids and ribbed motorboats, requires acute sensitivity to the situation and the limits of one’s own competency to act within it, what the Greeks called kairos.

Ai Weiwei’s skill is in acting with kairos. He blends use of the readymade with its civic potentiality, time and time again, alive to the multiplicity of readings of what others too readily confine in one narrative.  His kairos often courts controversy. But the spectacle alone, even if it has museum curators purring, is insufficient. Weiwei’s readymade method does not accept art and notoriety as synonyms. Kairos only works if the controversy is grounded in a sustained and embodied sense of civic concern.

We have argued Ai Weiwei’s artistic practice is both ethical and entrepreneurial; and one cannot appear without the other.

To be ethical is a capacity to stay in the ‘open’ and absorb differences, without slavishly acceding to them. It is also to encourage others to do likewise. Ethics requires we encounter what the philosopher Alasdair MacIntyre argues are some pretty basic questions: why doing X is a good way to achieve Y, and why Y is good in situation A, and not B. The answers are never given, but need to be constantly worked at. This work is an inherently social activity of living alongside ‘otherness’. Firstly because it is learnt through on-going engagement with the ordinary lives of others rather than through contemplation or reading philosophical theories. Secondly, because it yields an awareness of what the literary theorist Stephen Greenblatt calls the psychic, social and material bonds by which we are tied to others in thought, in practices and in our physical confinement to a world of physical objects and mortal bodies. Ethical reasoning also elicits a judgmental relationship with oneself and others, by which one becomes aware of the sheer variety of values and goods that humans might pursue, and because of which one attests to the cogency of reasonableness (others are not treated as means) and reciprocity (the different roles and conditions in which values and goods are embodied).

In a blog post from 2006 he asks “Can a nation that denies fundamental fact, conceals and evades information, possibly renew itself? What kind of foundation must an organizational system lacking an ethical conscience be built on? And what kind of price will we pay for it?” Most would assume he means China here, but really he is asking it of the process of organisation itself: the process that refuses refugees a home on grounds of preserving security; the process that commodifies artists into orthodoxy by declaring them radical; the process by which all humans can be momentarily touched by sympathy only to find it concealed by a headless pursuit of everyday happiness.

To create such an ethical condition means getting inside everyday practices (entre), and then taking and twisting (preneur) them in such a way that they reveal themselves, both their underbelly and the possibility for transformation. It is this ability to penetrate, occupy and absorb everyday life in such a way that defines the entrepreneurial condition. In our thinking, entrepreneurship has nothing to do with economic trade, and everything to do with creating transformative possibility in our civic condition. The entrepreneur does this by creating nascent and hence basic structures that, rather like rabbit holes, lead who knows where, but certainly not here. And they do so in ways that seduce (leading astray) others to come with them. In this they have the capacity to be in two places at once: alive to the demands of situations in which they find themselves thrown and toward which they must act in a timely manner, and yet also alive to the untimely possibility for doing things otherwise.

There is in the entrepreneur an organisational adeptness (kairos) at loosening and questioning opinion, tradition, habit and authority. They create structures in which this loosening occurs, and which allow others and otherness to act out alternatives. The same with Weiwei’s readymades. These are structures that reveal everyday conditions in ways that encourage their audience not only to ask questions of the prevailing order but to see possibilities for re-organisation. It is encouraging precisely because it avoids offering dogmatically pleasing alternatives (it deals in ethical contingencies, not moral certainties). So in works like Sunflower Seeds China is presented less as a nation that should be criticised than an economic and social network in which we are all heedlessly implicated. The millions of porcelain sunflower seeds – we might call them fake readymades – are replete with conflicting symbolism. Sunflowers were icon of togetherness turning in instinctual unison towards the nurturing light of the sun king Chairman Mao. Yet they are also reminders of the decades of starvation endured by the Chinese for whom, as street food, they were a meagre source of nourishment. Being porcelain they attest to China’s historical and practical prowess as a manufacturing nation, and how the global economy has become weaned on this role, perhaps to a point of mutual mal-dependency. The seeds reveal prevailing forms of ownership, oppression, togetherness, sociality, productive capacity, dependency and loss of individuality, and it is in having these different aspects dawn together that the basic structure of the art piece – the millions of seeds spread out on an art museum floor – might provoke us into organising differently.